Astrobiology on the Cheap

Keeping space missions separate can be a difficult challenge when so many satellites are launched on a single rocket. Take O/OREOS (Organism/Organic Exposure to Orbital Stresses). The small satellite rode into space on an Air Force Minotaur IV rocket on the 19th, a launch we noted here in connection with the NanoSail-D solar sail demonstrator. For NanoSail-D was itself carried into space as part of the FASTSAT payload bus (Fast, Affordable Science and Technology Satellite), and FASTSAT and O/OREOS were subsumed under a mission called Space Test Program S26. Not to mention a number of other satellites from universities and industry that hitched a ride on the same booster.

All of this produces not just confusion but acronym fatigue. Nonetheless, interesting science is in the works. O/OREOS is all about conducting astrobiology science experiments on the cheap using nanosatellites (CubeSats), helping scientists plan future experiments on how organic molecules are changed by exposure to space. Says Pascale Ehrenfreund (a project scientist at George Washington University:

“The O/OREOS science team is excited to receive the first real-time measurements from samples onboard two science experiments. This will demonstrate that CubeSat technologies can be used for future missions to address fundamental astrobiology objectives.”

The satellite will conduct experiments, some lasting as long as six months, autonomously after receiving the command from the ground station in Santa Clara, California. The Space Environment Viability of Organics experiment (SEVO) aims to monitor four classes of organic molecules as they are exposed to space conditions, using molecules now known to be widely distributed throughout the galaxy. The organics, housed in micro-environments, are to be exposed to radiation through solar ultraviolet as well as visible light, trapped particle radiation (i.e., energetic protons and electrons trapped by the Earth’s magnetosphere) and cosmic radiation. Researchers will look for changes in UV, visible and near-infrared light absorption. 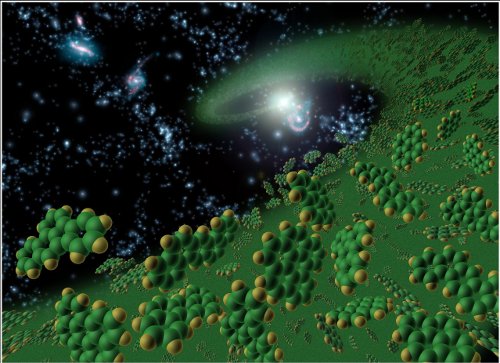 Image: This artist’s concept represents complex organic molecules, known as polycyclic aromatic hydrocarbons. These large molecules, comprised of carbon and hydrogen, are distributed throughout the Milky Way and other galaxies like it. They play a significant role in star and planet formation and are very common on Earth. They form any time carbon-based materials are not burned completely. They can be found in sooty exhaust from cars and airplanes, and in charcoal broiled hamburgers and burnt toast. Aromatic molecules identified in meteorites might have been beneficial to the origin of life on Earth. Image credit: NASA/JPL-Caltech

The Space Environment Survivability of Live Organisms (SESLO) payload, meanwhile, will look at the activity of microorganisms adapting to the space environment, measuring their growth and health while exposed to weightlessness and radiation. The experiment will grow sets of microbes — Halorubrum chaoviatoris and Bacillus subtilis — of the kind found in salt ponds and soil in a dried and dormant state. The O/OREOS researchers will measure their population density and color changes while the microbes consume dyed liquid ingredients.

CubeSats are a useful way to proceed because they’re so much less expensive than the alternatives, as Ehrenfreund notes:

“Secondary payload nanosatellites, like O/OREOS are an innovative way to extend and enhance scientists’ opportunities to conduct research in low Earth orbit by providing an alternative to the International Space Station or space shuttle investigations. With O/OREOS we can analyze the stability of organics in the local space environment in real-time and test flight hardware that can be used for future payloads to address fundamental astrobiology objectives.”

All of that, of course, plays into the much larger picture of contributing to our knowledge of life’s origin and distribution in the universe. Not bad for a nanosatellite no larger than a loaf of bread that weighs a mere 5.4 kg, operating in a low-Earth orbit some 644 kilometers above the surface. O/OREOS is the first NASA cubesat to fly with two distinct and independent science experiments on an autonomous satellite, and is constructed from off-the-shelf commercial and NASA-designed parts to operate as an automated, self-contained space laboratory. The O/OREOS mission dashboard is operational, as is the Twitter feed @NASA_OOREOS.