As if it were news, one thing the great flap over astrobiology and yesterday afternoon’s NASA news conference tells us is that anything smacking of extraterrestrial life brings over the top commentary long before the findings are officially discussed, as should be clear from some of the Internet blogging about the GFAJ-1 bacterium found in Mono Lake. And what a shame. Despite the astrobiology teaser, GFAJ-1 does not in itself tell us anything about alien life and does not necessarily represent a ‘shadow biosphere,’ a second startup of life on Earth that indicates life launches in any available niche. But the find is remarkable in its own right. 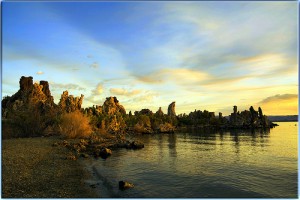 Let’s leave the astrobiology aside for the moment and simply focus on the fact that life is fantastically adaptable in terms of biochemistry, and can pull off surprises at every turn. That’s always a result worth trumpeting, even if it leaves the wilder press speculations in the dust. After all, it’s long been assumed that the six elements that underlay the basic chemistry of life are carbon, hydrogen, oxygen, nitrogen, phosphorus and sulfur. Despite persistent speculation, few thought life could exist without them.

Now we learn that the GFAJ-1 bacterium found in eastern California’s Mono Lake can, at least in the conditions of a fascinating experiment, use arsenic in its metabolism rather than being poisoned by it. Arsenic occurs in the lake in one of the highest concentrations of any site in the world. Let me quote the ever reliable Caleb Scharf (Columbia University) on arsenic and its role:

Arsenic is an insidious element. With 5 outer valence electrons the arsenic atom is chemically similar to the biologically critical element phosphorus, but only in crude terms. Life depends extensively on phosphorus – it helps form the molecular backbone of DNA, it is part of molecules like Adenosine triphosphate (ATP) that serves as a vital rechargeable chemical battery within all living cells, as well as many other biologically vital roles. Arsenic on the other hand can weasel its way in, waving its valence electrons in a come-hither fashion, and getting the best seat in the house. The problem is that once an organism takes in arsenic, replacing some of its phosphorus, it typically begins to malfunction – arsenic is is a fatter atom and biochemistry is a sensitive thing. There is good reason why arsenic has long been a poison of choice for nefarious human dealings.

Indeed. GFAJ-1 is intriguing because rather than just being tolerant of a toxin like arsenic, it’s actually able to use it. The team working under Felisa Wolfe-Simon (USGS) reported online today in Science that phosphorus is here replaced by arsenic, a case of an alternate building block for life of the kind long speculated about by science fiction writers. This from Nature:

Arsenic is positioned just below phosphorus in the periodic table, and the two elements can play a similar role in chemical reactions. For example, the arsenate ion, AsO43-, has the same tetrahedral structure and bonding sites as phosphate. It is so similar that it can get inside cells by hijacking phosphate’s transport mechanism, contributing to arsenic’s high toxicity to most organisms.

The team proceeded by collecting mud from the lake and adding samples to a salt medium that was high in arsenate, then diluting the material to wash out remaining phosphate. Steeping the cells in arsenic, the scientists discovered an organism that seemed to grow well under these conditions, even after multiple generations since their first collection more than a year ago. What phosphorus was available to the bacteria was present only in traces from the original colony of cells, and in impurities found in the growth medium. Again from Nature:

When the researchers added radio-labelled arsenate to the solution to track its distribution, they found that arsenic was present in the cellular fractions containing the bacterium’s proteins, lipids and metabolites such as ATP and glucose, as well as in the nucleic acids that made up its DNA and RNA. The amounts of arsenate detected were similar to those expected of phosphate in normal cell biochemistry, suggesting that the compound was being used in the same way by the cell.

Can these bacteria replace phosphate with arsenic naturally? Wolfe-Simon herself says thirty years of work remain to figure out exactly what’s going on, a comment on the preliminary nature of this work, which remains controversial in some quarters and is in obvious need of extensive follow-up. No shadow biosphere yet, but obviously the quest is ongoing because of its implications, and we’ve now received one very tantalizing piece of evidence that such things may be possible.

If life really did start here more than once — a finding that is not remotely demonstrated by this work — then we can talk about how likely it will have done the same thing on distant planets, upping the chances that we live in a universe where life emerges whenever given the chance. But we’re hardly there yet, as became evident in the exchanges between Wolfe-Simon and Steven Benner (Foundation for Applied Molecular Evolution) at the news conference. British science writer Ed Yong fleshes out some of the reasons for skepticism:

It’s an amazing result, but even here, there is room for doubt. As mentioned, Wolfe-Simon still found a smidgen of phosphorus in the bacteria by the end of the experiment. The levels were so low that the bacteria shouldn’t have been able to grow but it’s still not clear how important this phosphorus fraction is. Would the bacteria have genuinely been able to survive if there was no phosphorus at all?

Nor is it clear if the arsenic-based molecules are part of the bacteria’s natural portfolio. Bear in mind that Wolfe-Simon cultured these extreme microbes using ever-increasing levels of arsenic. In doing so, she might have artificially selected for bacteria that can use arsenic in place of phosphorus, causing the denizens of Mono Lake to evolve new abilities (or overplay existing ones) under the extreme conditions of the experiment.

And I should also return to Caleb Scharf, who notes that while phosphorus is relatively rare — in terms of cosmic abundance — compared to other major bio-chemically important elements, it is a thousand times more abundant than arsenic, which is little more than a trace by comparison. So much for the idea of entire biospheres crowded with life forms drawing on the stuff, at least in terms of the odds. The GFAJ-1 experiments make for a fascinating story, one that was upstaged by a media circus but remains notable news for all that. Paul Davies, one of the authors of the paper, calls this work ‘the beginning of what promises to be a whole new field of microbiology.’

But again, note the caveat, as Davies explains:

“This organism has dual capability. It can grow with either phosphorous or arsenic. That makes it very peculiar, though it falls short of being some form of truly ‘alien’ life belonging to a different tree of life with a separate origin. However, GFAJ-1 may be a pointer to even weirder organisms. The holy grail would be a microbe that contained no phosphorus at all.”

The paper is Wolfe-Simon et al., “A Bacterium That Can Grow by Using Arsenic Instead of Phosphorus,” published online by Science (2 December 2010). This article in Astrobiology Magazine provides an excellent backgrounder on the Wolfe-Simon team’s methods. Wolfe-Simon’s own Web site is impressive and well worth checking re her ongoing work.