When Voyager 2 was passing Neptune back in 1989, I stuck a video tape in the VCR and recorded the coverage — two video tapes, actually, because I wasn’t sure how much coverage there was going to be, and I didn’t want to miss anything. That meant getting up in the middle of the night to change tapes, but I figured the loss of sleep was worth it. Going back to those tapes today, I’m still struck by the same sense of awe that both the Voyagers were simply going to continue, that although the media spoke as if their journeys were over after their encounters at Titan and Neptune respectively, they still had years of power left and would continue talking to us deep into the 21st Century. 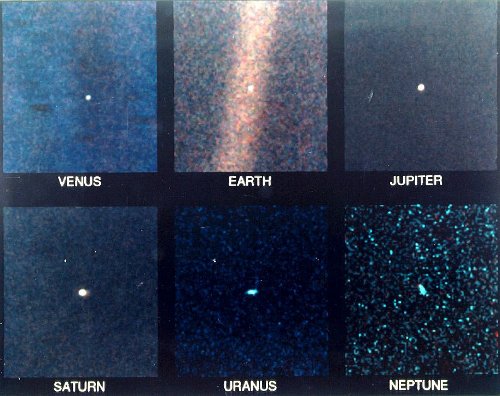 Image: Voyager 1 looks back to capture six planetary portraits. These six narrow-angle color images were made from the first ever “portrait” of the solar system taken by Voyager 1, which was more than 4 billion miles from Earth and about 32 degrees above the ecliptic. The spacecraft acquired a total of 60 frames for a mosaic of the solar system which shows six of the planets. Credit: Voyager 1 team/NASA.

The spacecraft nearing Neptune on my tapes was roughly 30 AU from the Sun. As of this morning, twenty-one years later, Voyager 2 is 94.03 AU out, and Voyager 1 (which left the ecliptic to make a flyby of Titan in 1980) is at 115.53 AU. The distances play with the imagination and offer a useful perspective. Voyager 1 is sixteen light hours from Earth — to be reasonably precise, 16 hours, 7 minutes as of 1202 UTC on the 14th. We’ve never sent anything sixteen light hours out before, but even at that distance, we’re only now penetrating the edge of the Solar System.

I have more to say about the size and scale of things, but I’m going to hold most of that for tomorrow in the form of a discussion of an interesting new book. For today, let’s talk about what Voyager 1 has found at 17.4 billion kilometers from the Sun. Out there, at the edge of the heliosphere, the spacecraft has moved into a region where the velocity of hot ionized gas — plasma — from the Sun has slowed to zero. With no outward movement of the solar wind, Voyager is seeing signs that the pressure of the ‘interstellar wind’ has turned the Sun’s wind sideways.

Voyager 1, then, is getting close to interstellar space, a crossing that will be marked by a sudden drop in the density of hot solar wind particles and an increase in the density of cold particles. The velocity of the solar wind has slowed at a rate of about 20 kilometers per second every year since August of 2007, at which point it was moving outward at some 60 kilometers per second. Readings over the last few months show an outward speed of zero since June. Rob Decker (JHU/APL) is a Voyager Low-Energy Charged Particle Instrument co-investigator, working with the instrument that provides the data fueling these results. Says Decker:

“When I realized that we were getting solid zeroes, I was amazed. Here was Voyager, a spacecraft that has been a workhorse for 33 years, showing us something completely new again.”

The thinking among Voyager scientists is that Voyager 1 is still within the heliosheath, the outer shell of the heliosphere (the bubble formed by the solar wind as it fills nearby space). After reaching the termination shock, the solar wind slows down and heats up in the heliosheath. Current models of the heliosphere’s structure, as discussed at the ongoing American Geophysical Union meeting in San Francisco, will be tuned up by the new data, allowing us a better estimate of Voyager 1’s entry into true interstellar space, now thought to be about four years away.

“In science, there is nothing like a reality check to shake things up, and Voyager 1 provided that with hard facts,” said Tom Krimigis, principal investigator on the Low- Energy Charged Particle Instrument, who is based at the Applied Physics Laboratory and the Academy of Athens, Greece. “Once again, we face the predicament of redoing our models.”