The Universe to Scale

Start with Buzz Aldrin’s footprint. Neil Armstrong took the iconic photo that ran around the world — it wasn’t the first footprint on the Moon because neither man took a photo of that, but Aldrin’s ridged bootprint will suffice. Blow the footprint up to full size and it fits neatly across two pages in Richard Gott and Robert Vanderbei’s new book Sizing Up the Universe (National Geographic, 2010). It’s emblematic of Apollo, of our aspirations and, perhaps, of hopes once again deferred. 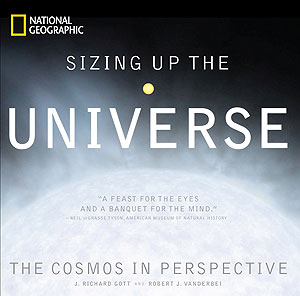 But Gott and Vanderbei aren’t making points about Apollo. They’re up to bigger things, much bigger things. Blow the scale up so that you have a view a thousand times larger than the photo of the bootprint and you can now see an entire asteroid (Itokawa) on the two-page spread, along with a Space Shuttle, the International Space Station and the Hubble Space Telescope. And now things really take off. Blow the scale up to 1:1 million and we can fit a good portion of the arc of Enceladus onto the pages, along with assorted asteroids and comets and a neutron star.

You get the idea. In the pages of this indescribably lovely volume, enlivened with celestial photography (much of it taken by Vanderbei himself), the two authors set about getting across the scale of things, a subject I played with briefly yesterday as we considered the journey of the Voyager spacecraft. 1:1 billion lets us fit Jupiter and Saturn onto the two-page spread, along with Neptune and Uranus and a host of Kuiper Belt objects and, at lower right, a bit of Proxima Centauri. We’re measuring the size of things, not their position, and when we reach 1:1 trillion, we can fit Rigel on the page, the inner Solar System, and the black hole at galactic center.

How far do we have to go to fit the entire visible universe onto a page? The answer is 1:1 octillion, which is 1027. At that scale, with a clever ‘You are here’ in the center of the spread, we can see everything from the cosmic microwave background to the quasars and galaxies, including the Sloan Great Wall, measured by Gott and entered into the Guinness World Records 2006 as the ‘largest structure in the universe.’ Surely by now we’re through — the Sloan Great Wall, after all, stretches for 1.37 billion light years, one tenth the radius of the visible universe.

But maybe we’re only through in a visual way. Alan Guth’s theory of inflation, which explains so much about what we see in the cosmic microwave background, tells us that the true size of the universe is far greater than what we see. We could take the scale up to 1 googol, which would be 10100 – a one with one hundred zeroes behind it — but that might not catch the true scope of things. Andrei Linde has speculated that our universe could be 1040,000 times larger than what we can see, a runaway expanding universe formed from what Gott and Vanderbei call a ‘high-density inflationary sea of dark energy,’ a dark energy with repulsive gravitational effects whose inflation, at least in our region, ends when the dark energy converts to thermal radiation.

We’ve reached the era of the big bang and its immediate aftermath. Inflation ends but the universe continues to expand. Gott’s own view embraces Linde’s belief that inflationary regions give birth to other inflationary regions through quantum fluctuations, a process he likens to branches growing off a tree. It’s a tree that keeps sprouting branches that grow up to be as big as the trunk, an infinite fractal tree that keeps growing forever. Listen to Gott on this possibility:

Our universe is just one of many on one of these branches. We will never see these other branches, because the space separating us from them is expanding so fast that light can never cross it. Where did the trunk come from? Perhaps it simply popped into existence by a process called quantum tunneling, as proposed by Alex Vilenkin. Or perhaps it formed a time loop, as proposed by me (Gott) and Li-Xin Li, when a branch looped back in time to grow up to be the trunk. We simply don’t know. Super-string theorists Paul Steinhardt and Neil Turok have suggested that our universe is a three-dimensional membrane floating in a ten-dimensional space and that the big bang occurred when our membrane collided with another. 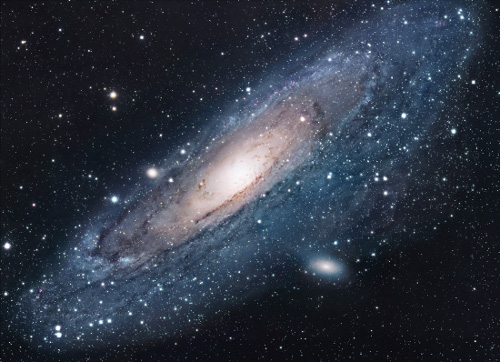 Image: To fit M31, the Andromeda galaxy, into a two-page spread, the scale would have to be 1:1 sextillion. 1 sextillion equals 1021. From the Earth’s surface, M31 appears 2.5 degrees across, five times as wide as the full Moon, but even with a small telescope, we can see only the bright, inner regions, so it appears much smaller. If we had better eyesight, we could see more than a dozen faint objects in the night sky with an apparent size larger than the Moon. Photo credit and copyright: Robert Gendler.

Gott’s proposal that multiple universes formed from a time loop seems a fitting way to end a book that explores size and scale from the very small to the infinitely large, touching along the way on how ancient astronomers made sense of our planet’s shape and distance from the Sun, how astronomers relate apparent to actual size, and how the entire visible universe can be represented on a single map. Gott manages the latter feat with a well-known four-page gatefold spread of the universe that he has updated and published for the first time in a book. No small part of the narrative is the art of mapping itself, how to render vast concepts like this on a visual but correct scale.

Long an admirer of Gott’s writing (don’t miss his Time Travel in Einstein’s Universe), I had the pleasure of meeting him at a conference in Princeton a few years back, where co-author Vanderbei entertained the scientists with a slide show of images he had made in his driveway. Vanderbei had discovered what other amateur astronomers have learned, that good amateur equipment with the help of CCDs and digital cameras can capture images even in light-polluted areas. Many of the photos he took for this volume seem, at first glance, to be the work of a major observatory, a tribute to what has become possible as amateurs join professionals in making contributions to astronomy.

Opening the book at random, I’m looking at photos of two sunsets, one showing a beautiful yellow Sun hanging over a seascape with rugged terrain in the background, the sky a deep amber. On the facing page is a shot taken by the Spirit rover at Gusev crater on Mars in 2005. Here the Sun is likewise low on the horizon, just touching the rim of a distant hill, but now it’s a white Sun, the atmosphere being too thin to allow the scattering of blue light that turns an Earthly sunset into a sea of color.

These scenes remind me that the book is all about comparing one thing to another to tease out the reasons for the differences between them. Aristarchus of Samos (320-250 BC) looked at the celestial sphere conceived by Eudoxus (408-355 BC) and saw a different kind of rotation, that of the Earth itself. He went on to measure the angle between the Moon and the Sun as seen from Earth to gather data sufficient to calculate the distance of the Sun (19 times farther away than the Moon, he thought, and thus much larger than it), and concluded that the Earth orbited the Sun 1700 years before Copernicus. The answers are in the natural world if you know where, and how, to look.

We can still do things in our Solar System the way I remember them being done in grade school — reduce the Earth to the size of a marble (this is a 1:1 billion scale) and Jupiter becomes the size of a grapefruit, and so on. But we’ve learned so much since those days about the true size of things at the upper end. Consider: The Hubble Ultra Deep Field survey saw 10,000 galaxies in only a tiny fraction of sky. Extrapolating from it, we can estimate that more than 140 billion such galaxies are within range of Hubble if we could somehow use it for a whole-sky survey. Then recall that the James Webb Space Telescope will have a primary mirror six times larger than Hubble’s in area, and will be fully a thousand times more sensitive than Hubble in the infrared.

When Vanderbei showed his photos at Princeton, the hardened group of scientists gasped audibly at the sheer spectacle of some of his stellar panoramas. None of us can fully comprehend the majesty of what surrounds us, even if we study these matters every day. But if you know someone who is interested in astronomy but still at the novice level, my hunch is that this book could awaken a lifelong passion. Don’t be surprised to find yourself, long after you’ve read it, picking it back up to gawk at particular plates, like the stunning three-page panorama of the Sloan Great Wall. In addition to everything else, the universe is shatteringly beautiful.