The Problem with Speed

We spend a lot of time talking about how to get an interstellar probe up to speed. But what happens if we do achieve a cruise speed of 12 percent of the speed of light, as envisioned by the designers who put together Project Daedalus back in the 1970s? Daedalus called for a 3.8-year period of acceleration that would set up a 46-year cruise to its target, Barnard’s Star, some 5.9 light years away. That’s stretching mission duration out to the active career span of a researcher, but it’s a span we might accept if we could be sure we’d get good science out of it.

But can we? Let’s assume we’re approaching a solar system at 12 percent of c and out there orbiting the target star is a terrestrial planet, just the sort of thing we’re hoping to find. Assume for the sake of argument that the probe crosses the path of this object at approximately ninety degrees to its orbital motion trajectory. As Kelvin Long shows in a recent post on the Project Icarus blog, the encounter time, during which serious observations could be made, is less than one second. A Jupiter-class world, much larger and observable from a greater distance, itself offers up something less than ten seconds at best for scientific scrutiny. 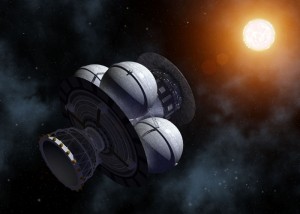 That’s a paltry return on decades of construction and flight time, not to mention the probable trillion or more dollars it would take to build such a probe, and it hardly compares well to what we’ll be able to achieve with even ground-based telescopes as the next generation of optics becomes available. What to do? Long is looking into these issues as part of the Project Icarus team, which is revisiting the Daedalus concept to see how changing technologies could alter the flight profile and produce a mission whose results would be substantially more useful.

One option is to do the unthinkable. Instead of ramping up flight speed to get to the destination more quickly, perhaps a better alternative is to slow the mission down. There are two ways to do this: 1) Aim for a slower cruise speed in the first place and/or 2) attempt to decelerate the vehicle. The latter choice is a genuine conundrum for reasons Long makes clear:

Another option being examined [for deceleration] is reverse engine thrust, but the problem with this is that if we assume an equal acceleration-deceleration profile then the mass ratio scales as squared compared to a flyby mission and so requires an enormous amount of propellant; definitely a turn-off for a design team seeking efficient solutions.

What this boils down to is that if you want to carry enough propellant to turn your spacecraft around and decelerate, you have to carry that additional propellant with you from the start of the mission. The rocket equation yields a stubborn result — the requirement for propellant increases not proportionally but exponentially in relation to the final velocity required. The initial fuel mass becomes vast beyond comprehension when we apply the numbers to slowing an interstellar craft, which is why the Icarus team, as it looks into deceleration, is examining ideas like magsails, where the incoming vehicle can brake against the star’s stellar wind.

A magsail or, for that matter, various other sail possibilities (Robert Forward described decelerating a manned interstellar vehicle by lightsail in his novel Rocheworld) offers the unique advantage of leaving the fuel out of the spacecraft — you’re braking against a stellar particle flux, or against starlight itself. But whether or not such ideas prove feasible, they’re more likely to at least help if the spacecraft is traveling slower to begin with, making it easier to decelerate further. A slower transit also reduces stress on the vehicle’s engines and structure during the boost phase.

The Case Against Going Faster

Long notes that Project Icarus is far from having answers on just what cruise speed will be optimal — Icarus is a work in progress. But these issues are at the heart of the interstellar quest:

…all of this analysis goes to the heart of whether a flyby probe such as Daedalus is really useful given what it took to get there. The potential science return is massively amplified by performing a deceleration of the vehicle and although it is a significant engineering challenge this is why the Icarus team decided to address this problem; and it is a problem, even if you choose to just decelerate sub-probes. Coming up with a viable solution to the deceleration problem in itself would justify Project Icarus and the five years it took to complete the design process.

Supposing you gave up on trying to stop the probe in the destination system, but simply made your goal to slow it down enough to make protracted scientific observations as it passed through? It’s clearly an option, and again we’re considering a trade-off between the shortest travel time and the ability to maximize science return. Interstellar flight is a challenge so daunting that it makes us question all our assumptions, not the least of which has always been that faster is better. Not necessarily so, the Icarus team now speculates, and perhaps a fusion/magsail hybrid vehicle will emerge, a significant upgrade from the Daedalus design. And this reminds me of something I wrote about magsails back in 2004 in my Centauri Dreams book:

At destination, a magnetic sail is our best way to slow [the] probe down, with perhaps a separate solar sail deployment at the end that can brake the vessel into Centauri orbit. If you had to bet on the thing — if the human race decided a fast probe had to be launched and was willing to commit the resources to do so within the century — this is where the near-term technology exists to make it happen.

Of course, I now look back on that passage and shudder at my use of the phrase ‘near-term’ to describe the vehicle in question, but maybe a very loose definition of ‘near-term’ to mean ‘within the next few centuries’ will suffice (hey, I’m an optimist). In any case, when we’re talking journeys of forty trillion kilometers (the distance to the nearest stellar system) and more, a century or two seems little enough to ask. And while I do believe this, I rejoice at the spirit of Project Icarus, whose team presses on to discover whether such a thing could be attempted in an even shorter time-frame.