A new image from WISE is always of interest, given our hopes that the Wide-field Infrared Survey Explorer will help us understand the distribution of nearby brown dwarfs. This image of the Triangulum Galaxy (M33) is at the other end of WISE’s charter, which covers objects both near and inconceivably remote. But it’s too gorgeous not to run, and it demonstrates how effective the four infrared detectors aboard the spacecraft are at pushing into this region of the electromagnetic spectrum with greater sensitivity than ever before. Here, the blue and cyan colors represent infrared at wavelengths of 3.4 and 4.6 microns — this is largely starlight. The green and red show light at 12 and 22 microns, most of which is light emitted from warm dust. 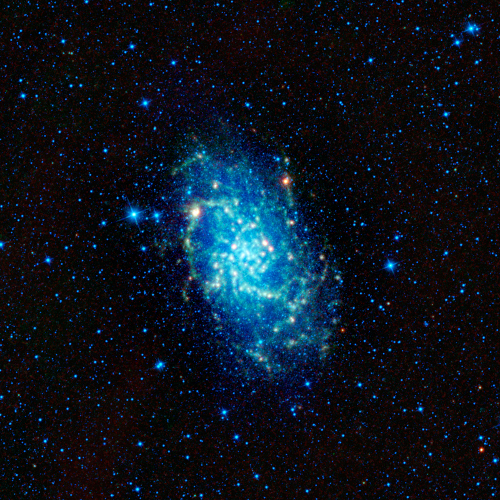 Image: One of our closest neighboring galaxies, Messier 33. Also named the Triangulum Galaxy (after the constellation it’s found in), M33 is one of largest members in our small neighborhood of galaxies — the Local Group. The Local Group consists of about 30 galaxies that are gravitationally bound and travel together through the Universe. M33 is the third largest member of the Local Group, dwarfed only by the Andromeda Galaxy (M31) and our own Milky Way. Credit: NASA/JPL-Caltech/WISE Team.

Notice the bright orange objects, which are areas of intense star formation — NGC 604, in the spiral arm at the upper left, is roughly forty times larger than the Orion Nebula. The WISE mission, however, may tell us about star formation in objects that are more distant still. Back in the 1980s, the IRAS (Infrared Astronomical Satellite) spacecraft showed us galaxies that were a hundred times more luminous in the infrared than in visible light, galaxies like Arp 220, which have earned their own acronym — Ultra-Luminous InfarRed Galaxies (ULIRGs). The fact that these galaxies are more plentiful at larger distances indicates they were more common in the early universe, perhaps the result of galactic collisions and mergers. WISE should give us a handle on the ULIRG population back to a time when the universe was just 3 billion years old.

M33 doesn’t fit into the ULIRG category, but WISE’s ability to peer through areas hidden behind dust in visible light shows us where clouds of cool gas are to be found. Normal star-forming regions stand out in this image in green and red. The benefits of infrared are clear: Little star formation is occurring in the core of this galaxy in the WISE view, but a visible light image would mask that effect, with the core appearing as the brightest feature. We can also see through infrared that the galaxy is larger than it appears in visible light, with dust extending farther from the core than expected.

And now I’m brought back to Gott and Vanderbei’s book Sizing Up the Universe, recently reviewed here, which talks in its first chapter about our perception of astronomical objects from the surface of the Earth. M33 is roughly half the size of the Milky Way, some 50,000 light years across, but at three million light years it’s close enough to us to cover an area of sky four times larger than the full Moon. Low surface brightness nonetheless makes it a very tricky catch for the naked eye. Somewhat easier is the Andromeda galaxy (M31), a full 2.5 degrees across, making it five times as wide as the Moon. It’s just a smudge with the unaided eye, and all we can really see is the bright core, but with both M31 and M33, we’re looking at some of the few objects that can be seen without a telescope that are not inside our own Milky Way galaxy.