With the American Astronomical Society getting ready to convene its 217th meeting in Seattle on the 9th, it seems fitting to talk about one of the most splendid ‘nearby’ stellar objects, the Andromeda Galaxy, otherwise known as M31. Edwin Hubble was the first astronomer to resolve individual stars in the galaxy, but working with Milton Humason, he did something even more significant, studying Cepheid variable stars inside it whose brightness varies in a regular pattern that indicates their absolute magnitude. These ‘standard candles’ made it possible to find M31’s distance, which Hubble showed was much greater than that of any stars in the Milky Way. 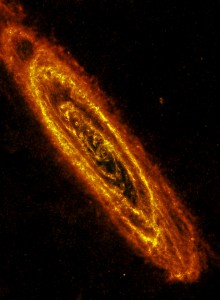 We were learning in Hubble’s day that the ‘spiral nebulae’ once thought to be part of our own galaxy were distant ‘island universes’ in their own right, a vast expansion of the size of the cosmos as humans understood it. M31 is the closest spiral galaxy to ours at roughly 2.5 million light years, offering up a spectacular view of as many as one trillion stars (according to 2006 Spitzer Space Telescope data). It’s also alive with star formation in ways that recent ESA images from both the Herschel and XMM-Newton space observatories are showing us.

This is a new Andromeda, the image above being the Herschel view of the galaxy in the far-infrared, showing us clouds of dust and gas where stars can form. Moreover, the Herschel imagery shows not only a large ring of dust about 75,000 light years across that circles M31’s center, perhaps the result of a collision with another galaxy, but a number of other concentric rings of dust that will doubtless contribute to further star formation.

Image (above): This is the most detailed image of the Andromeda Galaxy ever taken at far-infrared wavelengths. The Herschel infrared space telescope captured the image during Christmas 2010. The large rings of dust that encircle the center of the galaxy may be the result of a smaller galaxy having collided with Andromeda some time in the past. Credits: ESA/Herschel/PACS/SPIRE/J. Fritz, U. Gent. 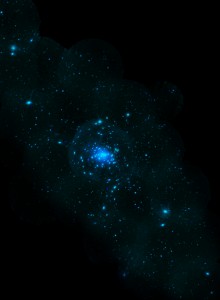 The contrast with the XMM-Newton data could not be more striking. XMM-Newton works with X-ray sources, and the imagery here is suggestive of stellar death as gas falls through space, heats up and gives off X-rays. Many of these X-ray sources are clustered around the center of the galaxy and indicate shockwaves and debris from exploded stars, or gaseous materials being sucked up by white dwarfs from stellar companions in what often ends up as a Type Ia supernova. In each case, we’re looking at wavelengths not visible from the surface of the Earth, images that tell us much about the living evolution of a massive city of stars.

Image: This image of the Andromeda Galaxy was taken by XMM-Newton during Christmas 2010. It shows hundreds of X-ray sources within Andromeda, many of them clustered around the centre, where the stars are densest. Each one is a dying star system. The sources can be shockwaves and debris rolling through space from exploded stars or pairs of stars locked in a gravitational fight to the death, in which one strips the other of precious gas. Credits: ESA/XMM-Newton/EPIC/W. Pietsch, MPE.

Below is a composite image showing views of M31 in various wavelengths for comparison. 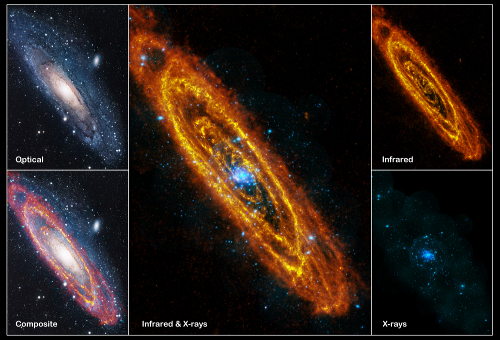