Planck Looks at the Interstellar Medium

Yesterday’s news conference on the Planck mission, held at the Millimeter and Submillimeter Sky in the Planck Mission Era conference in Paris, was so absorbing that I abandoned previous plans and stayed glued to the monitor most of the afternoon, replaying particular points from the various presenters (although keeping an eye on AAS happenings via Twitter as well). The video is available here, and it’s well worth a look given Planck’s interesting results so far, and the rich study of the Cosmic Microwave Background that will eventually flow from its data. 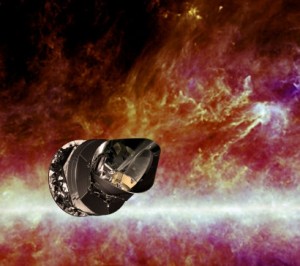 The European Space Agency has been offering broad coverage of the Planck findings, but before you check these out, bear in mind that the primary mission of the spacecraft is to measure the fluctuations in the CMB that both COBE and, to a higher level of detail, WMAP observed. It was fun to watch the sparring between the assembled Planck team and journalists at the conference when the question of data release came up. We won’t have the inside information on the CMB for another two years or so, the scientists arguing that such detailed work takes time (they’re right) and the journalists clearly looking for a bit of controversy.

Image: An artist’s impression depicts Planck against a background image of the Large-scale structure in the Milky Way. Credit and copyright: ESA.

Right now, though, Planck is engaged in a vital first step, which is to filter out the foreground emissions of cosmic structure located between us and the CMB. That means everything from galactic clusters to individual galaxies, gas and dust on large and small scales. And you can see where this leads — to filter out these factors, we have to study them with great precision, which is good science in itself and leads to yesterday’s discussion of the catalog of individual compact sources that Planck has made possible, along with maps of the galactic diffuse emission.

But I want to focus on three aspects of the numerous Planck results announced yesterday, particularly its findings on the interstellar medium. If radiation from the ISM is a nuisance for cosmologists hoping to study the CMB, it’s a treasure trove of information for those specializing in the gas and dust in our own galaxy. And while dust in the ISM is known to shine at far infrared and submillimeter wavelengths, what we didn’t expect was a significant emission in the microwave band. First detected in the 1990s, this ‘Anomalous Microwave Emission’ (AME) has puzzled astrophysicists ever since, but Planck is now offering up a solution.

Clive Dickinson (University of Manchester) led one analysis of Planck’s maps re the AME:

“We are now becoming rather confident that the emission is due to nano-scale spinning grains of dust, which rotate up to ten thousand million times per second. These are the smallest dust grains known, comprising only 10 to 50 atoms; spun up by collisions with atoms or photons, they emit radiation at frequencies between 10 and 60 GHz.”

Dickinson’s work focused on two star-forming regions in the Milky Way, the Perseus and Rho Ophiuchus molecular clouds, pointing to nano-scale spinning dust grains as being a major factor, and perhaps the only factor, in creating the Anomalous Microwave Emission. A second study, led by Jean-Philippe Bernard (Institut de Recherche en Astrophysique et Planétologie, Toulouse), looked at the AME as manifested in the Small Magellanic Cloud. Bernard’s team confirms the idea that spinning dust grains play a major role in the excess radiation. 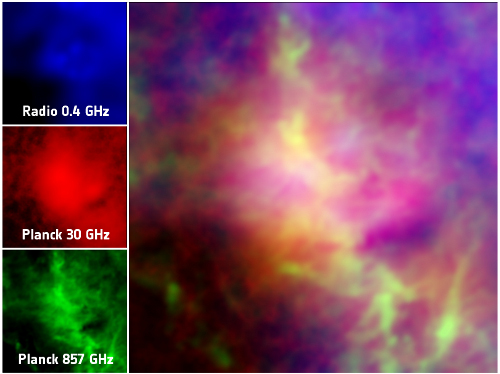 Image: This three-colour composite image of the Perseus molecular cloud (displayed on the right) is based on the three individual maps (shown on the left) of the complex, taken at 0.4 GHz from Haslam et al. (1982) and at 30 and 857 GHz by Planck, respectively. The colour composite highlights the correlation between the anomalous microwave emission, most likely due to nano-sized spinning dust grains and observed at 30 GHz (shown here in red) and the thermal dust emission, observed at 857 GHz (shown here in green). The complex structure of knots and filaments visible in this cloud of gas and dust represents striking evidence for on-going processes of star formation. Credit and copyright: ESA/Planck Collaboration.

Dark Gas in the Interstellar Medium

But Planck isn’t through with the interstellar medium yet. Its results also help astronomers measure an excess of dust emission that is sometimes called ‘dark gas,’ one which Bernard, speaking at yesterday’s news conference, was quick to point out has no relation whatsoever to ‘dark matter.’ Instead, this ‘dark gas’ component seems to be molecular gas which has been hard to quantify because it contains too little carbon monoxide (CO). The latter molecule is used by astronomers to measure the amount of molecular hydrogen in the interstellar medium.

Bernard adds: “”We believe that this ‘dark gas’ may be associated with the periphery of dense molecular clouds, where energetic ultraviolet photons destroy the CO molecules but leave the H2 undisturbed.” All of which points to Planck’s sensitivity to the temperature and density of gas in the ISM, helping us study components that have been the subject of theory but, until now, not of observation. The ISM studies help us extend our knowledge of galactic evolution and, for those of us with a long-term perspective, help clarify the medium through which future spacecraft will have to pass as we push outward into the galaxy.

A Catalog of Cold Cores

Planck is also finding a new set of targets for other telescopes to observe, among them cold and dense clumps of matter that emit most of their radiation in the sub-millimeter region of the spectrum. The complete Cold Core Catalogue of Planck Objects (with the delightful acronym C3PO) contains over 10,000 objects, with the most reliable of these, some 915 objects, being compiled in the Early Cold Core Catalogue. We’re talking about some of the coldest places in the universe, the dark birthplaces of stars whose formation is in its earliest stages.

Some of these cores have temperatures as low as 7 Kelvin (to see them, Planck’s detectors were chilled to 0.1 Kelvin), and as a by-product of their investigation, we wind up with a map of the coldest dust distribution throughout the Milky Way. Ludovic Montier (Institut de Recherche en Astrophysique et Planétologie, Toulouse) led the team that compiled and analyzed the C3PO sample:

“Instead of the compact cores that we expected to find, we have detected mainly objects which are rather elongated and have very low temperatures, between 7 and 16 Kelvin. These clumps are not isolated but appear to be all linked to one other, forming huge filamentary structures.”

Image: This map shows the density of cold cores in the Milky Way as detected by Planck during its first all-sky survey through its three highest frequency channels. Cold and dense clumps of dust, the coldest agglomerations of matter found within molecular clouds, are extremely important in order to understand the earliest phases of the formation of stars. Credit and copyright: ESA/Planck Collaboration.

The cold clumps tend to cluster along the Milky Way’s plane. Here’s Mika Juvela (University of Helsinki), who co-led the investigation with Montier:

“The majority of the cold material detected by Planck is either organised in filaments or located at the illuminated edges of pillars of dense gas. In addition, by combining the data with other observations we found that these cold clumps are aligned with hydrogen gas shells and other galactic regions of active star formation, supporting the scenario that the formation of stars might be triggered by earlier stellar populations.”

While Planck lacks the resolution to look deeply into the cores inside these cold clumps of matter, its work now feeds into future infrared observations by the Herschel instrument. Early Herschel work into a small number of the Planck detections has already been completed, but the Early Cold Core Catalogue offers hundreds of objects for further investigation. Understanding how cold dust factors into star formation helps us connect what we see in the Milky Way with broader galactic evolution.

That last point is significant because we’re talking about cold dust that has previously gone undetected in the study of local galaxies. Now we know that galaxies radiate more energy at far infrared and sub-millimeter wavelengths than we had assumed, and that changes how we draw conclusions about our observations of far more distant galaxies. Extremely cold dust is a clue to the history of star formation, giving us plenty to do as we wait for the Planck team to remove the veil from Planck’s whole-sky view and tell us what it has learned about the CMB.