A Deep-Sky Look at Lensing

As we continue to investigate the parameters of the proposed FOCAL mission to the Sun’s gravitational lens, it’s worth recalling how the idea of lensing has taken hold in recent decades. Einstein noted the possibilities of such lensing as far back as 1936, but it wasn’t until 1964 that Sydney Liebes (Stanford University) worked out the mathematical theory, explaining how a galaxy between the Earth and an extremely distant object like a quasar could focus the latter’s light in ways that should be detectable by astronomers. And it wasn’t until 1979 that Von Eshleman (also at Stanford) applied the notion to using the Sun as a focusing object.

It was Eshleman who suggested sending a spacecraft to the Sun’s gravitational focus at 550 AU for the first time, where magnifications, especially at microwave frequencies like the hydrogen line at 1420 MHz, are potentially enormous. This was a year after the first ‘twin quasar’ image caused by the gravitational field of a galaxy was identified by British astronomer Dennis Walsh. Frank Drake went on to champion the uses of the Sun’s gravitational lens in a paper presented to a 1987 conference, but since then it has been Claudio Maccone who has led work on a FOCAL mission, including a formal proposal to the European Space Agency in 1993.

Although ESA did not have funds for FOCAL, Maccone continues to write actively about the mission in papers and books. He’ll also be fascinated to see how the subject is being discussed at the American Astronomical Society’s 217th annual meeting, which concludes today. A team led by Stuart Wyithe (University of Melbourne) has made the case in a presentation and related paper in Nature that as many as 20 percent of the most distant galaxies we can detect appear brighter than they actually are, meaning that lensing has gone from a curious effect to a significant factor in evaluating galaxy surveys to make sure they are accurate.

Rogier Windhorst (Arizona State) is a co-author of the paper that sums up this work. Windhorst uses the analogy of looking through a glass Coke bottle at a distant light and noticing how the image is distorted as it passes through the bottle. The Wyithe team now believes that gravitational lensing distorted the measurements of the flux and number density of the most distant galaxies seen in recent near-infrared surveys with the Hubble Space Telescope.

The notion makes sense when you realize that the farther and older the object under study, the more likely there will be something massive in the foreground to distort its image — after all, there is more foreground universe to look through the farther out we look. But this is the first work I know that suggests that gravitational lensing dominates the observed properties of the earliest galaxies. These are objects that, as we observe them, are between 650 million and 480 million years old, seen with Hubble at redshifts of z > 8-10 respectively. Foreground galaxies from a later era, when the universe was 3-6 billion years old, will gravitationally distort these early objects. 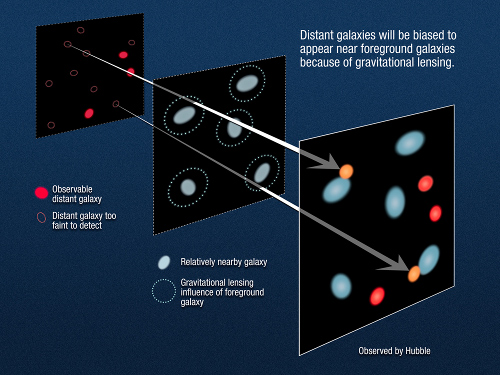 Windhorst doesn’t doubt that the distortions play a major role in our observations:

“We show that gravitational lensing by foreground galaxies will lead to a higher number of galaxies to be counted at redshifts z>8-10. This number may be boosted significantly, by as much as an order of magnitude. If there existed only three galaxies above the detection threshold at redshifts z>10 in the Hubble field-of-view without the presence of lensing, the bias from gravitational lensing may make as many as 10-30 of them visible in the Hubble images. In this sense, the very distant universe is like a house of mirrors that you visit at the State Fair — there may be fewer direct lines-of-sight to a very distant object, and their images may reach us more often via a gravitationally-bent path. What you see is not what you’ve got!”

On the other hand, without lensing we would not be able to study many of these objects at all, as Haojing Yan (Ohio State) notes:

“On one hand, lensing is good for us in that it enables us to detect galaxies that would otherwise be invisible; but on the other hand, we will need to correct our surveys to obtain accurate tallies… We predict that many galaxies in the most remote universe will only ever be visible to us because they are magnified in this way.”

This work began with images from the Hubble Ultra Deep Field survey, as Yan and colleagues sought to understand why so many of the distant galaxies in the survey seemed to be located near the line of sight to galaxies in the foreground. Statistical analysis has determined that strong gravitational lensing is the most likely explanation, and Yan’s current estimate is that as many as 20 percent of the most distant galaxies currently detected appear brighter than they actually are. But he notes that the 20 percent figure is a tentative one, adding:

“We want to make it clear that the size of the effect depends on a number of uncertain factors. If, for example, very distant galaxies are much fainter than their nearby counterparts but much more numerous, the majority of such distant galaxies that we will detect in the foreseeable future could be lensed ones.”

All of this means that future surveys will have to incorporate a gravitational lensing bias in high-redshift galaxy samples. Fortunately, the James Webb Space Telescope is on the way. With its high resolution and sensitivity at longer wavelengths, it should be able to separate out the lensing effect, untangling the images to allow further study, a task that is beyond the Hubble Wide Field Camera 3. And because surveys of the first galaxies are a major part of JWST’s mission, we have a classic case of the right instrument emerging at the right time.

We’re also going to need some interesting software upgrades. Windhorst notes the necessity of developing “…a next generation of object finding algorithms, since the current software is simply not designed to find these rare background objects behind such dense foregrounds. It’s like finding a few ‘nano-needles’ in the mother-of-all-haystacks.” Such work has obvious implications for any future space mission to exploit the Sun’s gravitational lens.