Next week I’ll be reviewing Richard Panek’s The 4 Percent Universe (Houghton Mifflin Harcourt, 2011), a penetrating look at our investigations of dark matter and dark energy. But plenty of information has also come out of the American Astronomical Society’s 217th meeting, which ended yesterday. We looked at interesting gravitational lensing results in the previous post, pondering how they affected our census of high-redshift galaxies, but equally intriguing is a study of 14 massive galaxies that helps us map out the distribution of dark matter within them.

The work was led by David Pooley (Eureka Scientific), focusing on galaxies with strong gravitational lensing characteristics. The 14 galaxies average about 6 billion light years away, and they appear almost directly in front of even more distant galaxies that each include a supermassive black hole at galactic center with associated quasar. You know from our ongoing discussions of the FOCAL mission what to expect — light from the quasars is gravitationally lensed by the intervening galaxies to produce multiple images of the quasar.

Specifically, four images of the quasar appear as a result of light being ‘bent’ around the massive foreground object. Or perhaps the better way to put it is that the light is simply following the curvature of spacetime caused by the foreground galaxy. It’s this effect that makes light appear to bend. In any case, Pooley’s team went to work on the lensing images, using the Chandra X-ray Observatory to study them. Einstein’s general theory of relativity makes clear what the images should have looked like, but Chandra revealed some telling differences. 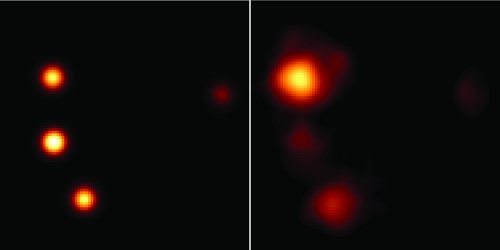 Image: Model prediction of what the four images of the background quasar RXJ 1131-1231 should look like, as lensed by an intervening galaxy (left). Chandra X-ray observations show a strong anomaly in the middle of the three images on the left side of the panel (right). Credit: D. Pooley (Eureka Scientific).

What’s going on? The aggregate gravitational field from all the matter in the foreground galaxy produces the gravitational lensing effect, creating the four distinct images of the distant quasar under study. And as the light passes through the lensing galaxy, it is also affected by the individual gravitational fields of the stars within the galaxy, what Pooley calls ‘lensing on top of lensing.’ How much the light is thus affected depends on both the number of stars and the amount of dark matter in the regions of the galaxy through which the quasar’s light passes.

If you simulate the effect with a galaxy made entirely of stars and completely devoid of dark matter, you do not get the Chandra results. Run the same simulation with a galaxy made entirely of dark matter and the results again diverge. Pooley’s team found that to match what Chandra sees, the galaxies must consist of 85 to 95 percent dark matter in the region through which the background light from the quasars passes. Interestingly, these regions are between 15,000 and 25,000 light years from the centers of the lensing galaxies.

Dark matter studies that work with cluster lensing, such as the famous Bullet Cluster analysis, focus on dark matter that is largely outside the individual galaxies in the cluster (we’ll be talking about the Bullet Cluster results again next week when I discuss Panek’s book). The new results look within elliptical galaxies to make their measurement. The more gravitationally lensed quasars we discover and observe with Chandra, the more these results will be refined, because working in the X-ray region of the spectrum gives far more precise results than optical studies. And because upcoming large-area surveys will doubtless increase our harvest of useful lensing phenomena, we can expect still more detailed maps of the dark matter within galaxies.