The Most Distant Galaxy Yet?

As we improve our ability to look back to the early universe, the changes we see in galaxies at this period compared to later eras are striking. A new study, using data from the Hubble Space Telescope’s Wide Field Planetary Camera 3 has been gathering infrared imagery back to a period as early as 480 million years after the Big Bang. What stands out in this work is the rate of star formation. In the period between 480 million to 650 million years after the Big Bang, the rate of star birth increased ten times. Garth Illingworth (UC-Santa Cruz) calls the result “…an astonishing increase in such a short period, just 1 percent of the current age of the universe.”

Moreover, the number of galaxies themselves showed a marked change. Says Illingworth:

“We’re getting back very close to the first galaxies, which we think formed around 200 to 300 million years after the Big Bang… Our previous searches had found 47 galaxies at somewhat later times when the universe was about 650 million years old. However, we could only find one galaxy candidate just 170 million years earlier. The universe was changing very quickly in a short amount of time.”

Among the galaxies studied is a candidate that appears to be the most distant galaxy ever observed, some 13.2 billion light years from Earth. The newly found galaxy has a redshift value (z) of 10.3, which places it just 480 million years after the birth of the universe. Remember that these redshifts are not Doppler shifts, which would be caused by the physical motion of the galaxies as they moved away from us in space. Rather, they are ‘cosmological’ redshifts. The photons being emitted from the galaxies are stretched as they travel through an expanding spacetime. 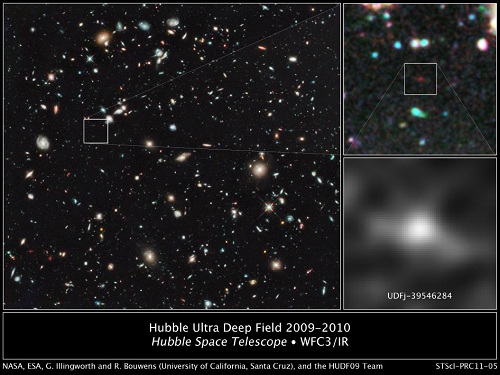 Image: The farthest and one of the very earliest galaxies ever seen in the universe appears as a faint red blob in this ultra-deep–field exposure taken with NASA’s Hubble Space Telescope. This is the deepest infrared image taken of the universe. Based on the object’s color, astronomers believe it is 13.2 billion light-years away. (Credit: NASA, ESA, G. Illingworth (University of California, Santa Cruz), R. Bouwens (University of California, Santa Cruz, and Leiden University), and the HUDF09 Team).

The concept goes back to the Dutch astronomer Willem de Sitter, who went to work on Einstein’s general theory of relativity not long after it was published and discovered that a stretching of space itself would cause light from more distant objects to appear redder than light from nearby objects. Hubble’s later observations could then be explained using de Sitter’s concept as indications that space and the photons in it are being stretched as the universe expands. David Weintraub tackles the subject in depth in his new book How Old Is the Universe (Princeton University Press, 2011:

Space that is empty of matter does not and never did exist. The distances between galaxies, galaxies being dense pockets of matter in an otherwise rarefied universe, are increasing with time but the galaxies themselves are not speeding through space. On the grandest scale (that is, ignoring small local motions that all galaxies have as they interact with nearby galaxies), galaxies are fixed in their locations in space. They do not move through space. Yet the distances between galaxies grow rapidly because the fabric of space in between the galaxies is continually being stretched, taffy-like, with the galaxies patiently riding along at fixed locations in the taffy.

Sorry for the digression, but I finished Weintraub’s book a few weeks back and have been paging back through it now and then with these concepts in mind. I’ll review the book soon. In any case, I hope the digression helps to put the new work in context, and points out how significant finding a galaxy with a z value of 10.3 is. The finding and the analysis of galaxies at slightly lower redshifts allows us to start building up a population of very early galaxies, and that should offer useful information re how galaxies form, particularly because the number of galaxies in this period increases so rapidly.

All of this work involves data originally collected from the Hubble Ultra Deep Field (a small region in the constellation Fornax) which were gathered during two four-day stretches in 2009 and 2010, focusing Hubble’s WFC3 infrared camera on a tiny part of the HUDF for a total exposure time of 87 hours. What also emerges from this work is that galaxies this faint and small (the Milky Way is 100 times larger) will need the resources of the James Webb Space Telescope for follow-up study beyond redshift 10.