Last week turned into a major disruption for Centauri Dreams. Major server problems that have involved new hardware and all manner of delays struck late on the night of Sunday February 27 and kept the site offline until this past weekend. Sorry for this, and thanks to those of you who kept in touch via email or via the @centauri_dreams Twitter feed. Let’s hope the situation is now under control. In any case, it’s time to get back to work, which I’ll begin with this piece on the return of NASA’s Institute for Advanced Concepts.

On my desk is a large black mug, too big for coffee despite the copious amounts of coffee I consume — I’ve got it loaded with pens, yellow markers and the like. I take special pleasure in seeing it every day because it has a bold NIAC logo on it — NASA Institute for Advanced Concepts — blue and white on a black background, and on the other side is a favorite phrase of Bob Cassanova’s: “Don’t let your preoccupation with reality stifle your imagination.” At the time he sent me the mug, Bob was the head of NIAC, and we had talked several times about issues like that, about how you fire people up to do imaginative work and push the frontiers hard. 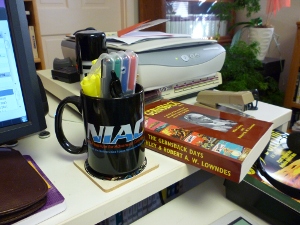 As Centauri Dreams readers know, NIAC was de-funded in 2007, although there seemed to be a commitment on the part of those who had participated in NIAC to bring it back. I liked that optimism but didn’t see much chance of a NIAC revival because of budget realities. But now we have a new NIAC, under the capable direction of John (Jay) Falker. It’s an organization that promises to fund “early studies of visionary, long term concepts – aerospace architectures, systems, or missions (not focused technologies).” And it’s all about unusual ideas, notions at Technology Level 1 or 2 or possibly early 3, ideas that need brainstorming and seed money.

Building on the Original NIAC

I’m wishing Jay Falker well in his new role and think he’s well suited for it — before this, among a number of other things, he led the realignment of NASA’s $2 billion exploration research and technology portfolio. Will the new NIAC assume the basic charter of the old? We’ll have to wait and see. Remember that at one point, NASA was funding both the Breakthrough Propulsion Physics project and NIAC, more or less situating NIAC in the role of developing relatively near-term ideas that scaled well from known physics, while BPP looked more aggressively at the completely uncharted territory of long-term and completely revolutionary propulsion.

But the lines are never clear-cut, and those with a commitment to the idea of interstellar flight know we have to look in both directions, which is just what the Tau Zero Foundation tries to do. It’s instructive to look back at the original NIAC site, which was managed and is now preserved by the Universities Space Research Association. If you’re involved in interstellar ideas, you want to familiarize yourself with the ‘funded studies’ section, where Phase 1 and II reports are available for many concepts that could become relevant to later interstellar efforts.

Years ago, it was poking around in the NIAC archives where I first learned about Steve Howe’s work on a small, hybrid sail using anti-hydrogen and fission, a concept that seems to scale well and requires amounts of antimatter small enough to be within our reach in the forseeable future. Jim Bickford’s reports on antimatter extraction are also provocative, and you’ll also find early work by Webster Cash on the New Worlds Imager, which in its most advanced version would be theoretically capable of imaging an Earth-mass exoplanet down to the level of individual continents. Ralph McNutt’s reports on an interstellar probe are also here — this work continues at Johns Hopkins Applied Physics Laboratory under the name Innovative Interstellar Explorer, so the NIAC legacy has persisted. 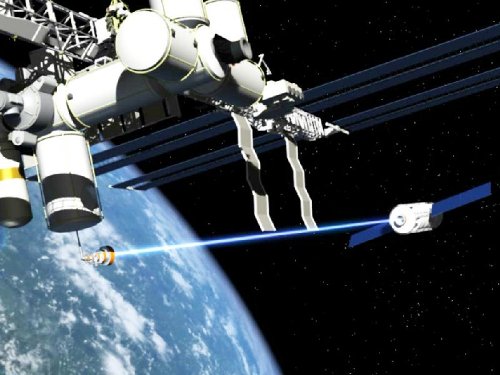 The original NIAC site is quite a resource, from the space elevator to advanced robotics, and I commend it to you. We now wait to see what kind of projects the new NIAC is interested in funding. We’re in a new world now, one in which commercial and private initiatives play an increasingly significant role in developing tomorrow’s technologies. Getting another venue for advanced proposals back into the game bodes well for space exploration, even as we try to work out the synergies that exist between government entities and efforts like Tau Zero.

Be aware as well of the recently announced NASA solicitations, which can be accessed by opening the NASA Research Opportunities homepage and then linking through the menu listings “Solicitations” to “Open Solicitations.” I’ll quote directly from the relevant parts of the announcements, the first on NIAC itself:

This NRA [NASA Research Announcement] solicits multiple studies, each of which will investigate an architecture, mission, or system concept that has the potential to change the possible in aeronautics or space. NASA Innovative Advanced Concepts (NIAC) is part of the Office of Chief Technologist (OCT). Concepts proposed for NIAC Phase I studies must be innovative and visionary, technically substantiated, and very early in development (10+ years out; Technology Readiness Level 1, 2, or early 3). Focused technology maturation and incremental improvement are explicitly not of interest in this program. Finally, while NIAC encourages great leaps and accepts the accompanying risk, all proposals must be technically credible, based on sound scientific principles.

Proposals shall be submitted electronically, and all proposers shall use either NASA’s proposal data system, NSPIRES (http://nspires.nasaprs.com ) by March 29, 2011. Proposals will be due on or before May 2, 2011.

And two other solicitations, starting with this:

The Game Changing Technology Division (GCT), within NASA’s Office of the Chief Technologist (OCT) is soliciting executive summaries, white papers, and proposals for research and development (R&D) for technology that is innovative and unique and promises to enable revolutionary (game-changing) improvements to the efficiency and effectiveness of our country’s space capability. Novel (unique) capabilities are sought in any of the NASA Space Technology Grand Challenges or the NASA draft Space Technology Roadmaps. Responses may be submitted at any time while this solicitation is open. Responses will be reviewed and award decisions made throughout the year.

This announcement solicits proposals for the demonstration of space technologies that provide new system-level technological capabilities. OCT TDM is seeking to identify candidate crosscutting, system-level technologies to be demonstrated in the relevant environment such as ground, air, suborbital or orbital regimes. A key requirement in this program is that the technology under consideration must clearly be crosscutting. Crosscutting is defined as a technology with potential to benefit more than one customer, where a customer can be a NASA Mission Directorate, another government agency, academia, or the aerospace industry.

See the above site for the full solicitations, and be aware that this work aims at a higher Technology Readiness Level (TRL) than what NIAC is all about — the solicitation immediately above, for example, aims at a TRL of at least 5, with the aim of raising it to TRL 7 or higher. But all of this is interesting to watch unfold as we track the progress of technologies within NASA that may have implications for deep space missions. And it will be particularly interesting to see what kind of Phase I studies the new NIAC will implement as the Institute begins its second life.