What do we make of the ‘tiger stripes’? The intriguing terrain in the south polar region of Saturn’s moon Enceladus is geologically active and one of the most fascinating finds of the Cassini mission. The ‘stripes’ are actually four trenches, more or less in parallel, that stretch 130 kilometers, each about 2 kilometers wide. What Cassini showed us was that geysers of ice particles and water vapor are being ejected into space from the interior of the moon, setting off astrobiological speculations that elevated Enceladus to a new and deeply intriguing status.

Is there liquid water under the surface? You could make that case based on recent work showing that some ice particles ejected from the moon are rich in salt, a sign that they may be frozen droplets from a saltwater ocean in contact with Enceladus’ mineral-rich core. Interesting place indeed — we’ve got a serious possibility of liquid water and an energy source in the form of tidal effects from Enceladus’ orbit as it changes in relation to Dione and Saturn itself. We’ve also got observations of carbon-rich chemicals in the plumes streaming from the moon.

Given all that, new observations of the heat output from the south polar region of Enceladus are provocative. An analysis recently published in the Journal of Geophysical Research draws on data from Cassini’s composite infrared spectrometer to show that heat output from the ‘tiger stripes’ region is much greater than previously thought. In fact, the internal heat-generated power is thought to be about 15.8 gigawatts, more than an order of magnitude higher than predicted. Enceladus’ south polar region is giving us 2.6 times the power output of all the hot springs in the Yellowstone region, using mechanisms that are not yet understood. 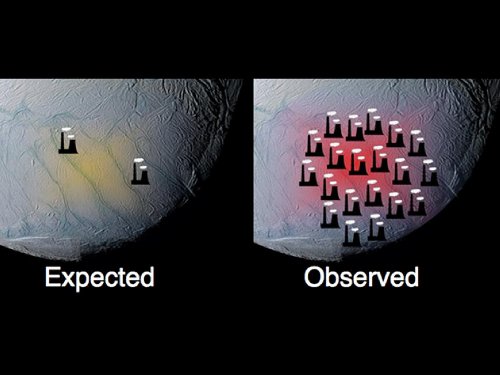 Image: This graphic, using data from NASA’s Cassini spacecraft, shows how the south polar terrain of Saturn’s moon Enceladus emits much more power than scientists had originally predicted. Data from Cassini’s composite infrared spectrometer indicate that the south polar terrain of Enceladus has an internal heat-generated power of about 15.8 gigawatts. Credit: NASA/JPL/SWRI/SSI.

A 2007 study of the internal heat of Enceladus, which was based largely on tidal interactions between the moon and Dione, had found no more than 1.1 gigawatts averaged over the long term, with heating from natural radioactivity within Enceladus adding another 0.3 gigawatts. The new work covers the entire south polar region, raising speculation that the unusually high output is due to periodic surges in the tidal heating as resonance effects change over time. But the paper acknowledges “The mechanism capable of producing such a high endogenic power remains a mystery and challenges the current models of proposed heat production.” Whatever the case, the higher heat flow finding makes the presence of liquid water that much more likely.