With April approaching, my thoughts turn more and more to the release of the WISE data, which should tell us a great deal about brown dwarfs and other relatively cool objects in our stellar neighborhood. The Wide-Field Infrared Explorer mission hasn’t gained the media attention of a Kepler or a CoRoT because it’s not specifically a planet-hunter and isn’t in the business of turning up small, rocky worlds. But if you’ve been following our discussions here, you know how important a mission this is. We’ll get a bit more than half the data WISE has generated in April, and the rest of the dataset in 2012, by which time we may be able to identify, or else lay to rest the idea of, a gas giant (‘Tyche’) at 15000 AU, or a brown dwarf closer than Alpha Centauri.

It’s at the low end of the temperature range that so much interest is focusing these days, and the fact is that until we can get a read on how common brown dwarfs are, we won’t have a good idea about what kind of stars are most common in the galaxy. Until recently, the M-dwarf population, numbingly hot compared to the average brown dwarf, was assumed to be the most common stellar type, accounting for perhaps 75 percent of all stars. But we need to know the percentage of brown dwarfs, and to understand the various sub-groupings that make up this classification.

On that score, a binary system called CFBDSIR 1458+10, 75 light years from Earth, swims into interesting focus. Here we have two components, CFBDSIR 1458+10A and CFBDSIR 1458+10B, both of which are brown dwarfs, orbiting each other at a distance of about three AU with an orbital period of thirty years. The second brown dwarf (CFBDSIR 1458+10B) is now found to be perhaps the coolest star ever identified, with a temperature being reported on my side of the Atlantic as equivalent to that of a hot cup of coffee — in Europe, ESO is saying it’s as hot as a ‘freshly made cup of tea.’

So poke your finger in a nice, steaming cup of Costa Rica Tres Rios or a fine Darjeeling as the mood strikes you, and ponder a star of this temperature, just hot enough to bring water to a boil. What an intriguing object, as Michael Liu (University of Hawaii) is quick to note:

“At such temperatures we expect the brown dwarf to have properties that are different from previously known brown dwarfs and much closer to those of giant exoplanets — it could even have water clouds in its atmosphere. In fact, once we start taking images of gas-giant planets around Sun-like stars in the near future, I expect that many of them will look like CFBDSIR 1458+10B.”

Liu is lead author of the paper on this work, where he and his colleagues point out that the object in question is 150 K cooler in temperature than any known brown dwarf, making it a candidate for the first member of the proposed Y spectral class. Thus far we just have models that suggest the presence of this class of ultra-cool brown dwarfs with temperatures below 500 K, although two recently discovered objects (UGPS 0722-05 and SDWFS 1433+35) have been considered possible members of the class. With a temperature of 370 K (plus or minus 40 K), the lesser dwarf in the binary Liu is studying would seem to be the best candidate yet.

Overall, CFBDSIR J1458+1013B is the most promising candidate to date for the hypothesized Y spectral class, given its extremely low luminosity, atypical near-IR colors, and cold inferred temperature. While spectroscopy is needed to place it in full context with the known T dwarfs, the singular nature of this object is unambiguous, thanks to our parallax measurement. CFBDSIR J1458+1013B is 1.5–2.0 magnitudes less luminous in the near-IR than any previously known brown dwarf and therefore is cooler than any known brown dwarf. For reference, two magnitudes in absolute magnitude spans most of the T dwarf sequence, from about T0 to T6… On this basis alone, this object is a significant leap. 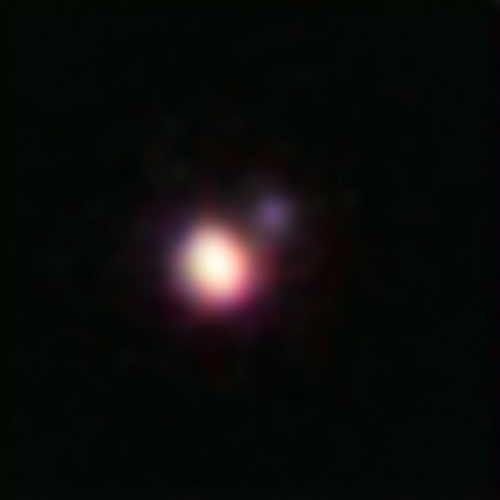 Image: This image of the brown dwarf binary CFBDSIR 1458+10 was obtained using the Laser Guide Star (LGS) Adaptive Optics system on the Keck II Telescope in Hawaii. Adaptive optics cancels out much of Earth’s atmospheric interference, improving the image sharpness by a factor of ten and enabling the very small separation binary to be resolved. This is the coolest pair of brown dwarfs found so far—the colder and dimmer of the two components is a candidate for the brown dwarf with the lowest temperature ever found. This color picture was created from images taken through four different filters at near-infrared wavelengths. Credit: Michael Liu, University of Hawaii.

Usefully, the orbital period is short enough that we will be able to estimate the mass of this binary system over the next few years, helpful information as we probe the limits of mass and star formation. Thus we explore that fascinating and blurry boundary between planet and star. In case you’re wondering, the proposed 370 K temperature for CFBDSIR 1458+10B is about 170 K higher than what John Matese and Daniel Whitmire are proposing for the temperature of Tyche, the hypothesized gas giant in the Oort Cloud. A blurry boundary between planet and star indeed.

Previous post: Extraterrestrial Life: The Need for an Answer