Asteroid Mining: A Marker for SETI?

Having just finished Iain Banks’ The Player of Games, I’m thinking about the ‘orbitals’ he describes in his series of novels about the Culture, a vast, star-crossing civilization that can build space habitats in the form of massive rings. Orbitals are smaller than the kind of ‘ringworld’ Larry Niven envisioned, but huge nonetheless, bracelets of super-strong materials housing billions who live on their inner surfaces as they orbit a parent star. The visual effects Banks pulls off in describing these habitats are spectacular. And now a new paper by Duncan Forgan (University of Edinburgh) and Martin Elvis (Harvard Smithsonian Center for Astrophysics) has me wondering about the kind of mining activities it would take to produce the raw materials for such constructs. 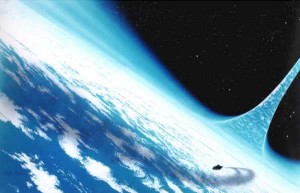 Forgan and Elvis are interested in what they describe as a multi-wavelength, multi-signal approach to SETI. We’re used to the idea of huge radio dishes listening for extraterrestrial signals, but SETI is evolving through the use of optical methods, and moving in another tangent into ways of searching for extraterrestrial artifacts on the grand scale, like Dyson spheres. Throw in our ongoing hunt for terrestrial-class exoplanets through missions like Kepler and you have a broadly based strategy open to the detection of another civilization. The authors’ new paper suggests adding one more place to look: In the debris disks around other stars, where we might find signs of asteroid mining for raw material.

Image: Iain Banks’ Consider Phlebas has appeared with a number of different covers, but this one gives you a sense of the scope of the ‘orbitals’ he writes about, vast technological ‘bracelets’ on which billions live. What would it take to produce the raw materials for an orbital? Would we be able to detect such work as it progressed?

Data Mining in a Debris Disk

Debris disks are what’s left over when the gaseous disks around young stars go through their normal evolution, leaving rocky and icy debris in various sizes, like the comets and asteroids found in our own Solar System. We’ve been learning a great deal about debris disks through spectroscopy and imaging ever since the first detection of such a disk around the star Vega, back in the 1980s. These days, we have finely tuned instruments like the Herschel Space Telescope and Spitzer that can provide a wealth of new data. How could we use that data to search for potential evidence of an extraterrestrial intelligence manipulating a debris disk?

It’s a fascinating notion (and thanks to Adam Crowl for calling my attention to this paper). The authors assume that the engineering limitations we have experienced in our own history will also hold for alien cultures. Like us, they will need large quantities of raw material to build the structures their civilization requires. And like us, if we are ever to build a spacefaring civilization, they will need to mine such materials as they move into nearby space, building space vehicles and large habitats as sections of the population move off-planet. Both biological and post-biological civilizations will, then, need the resources demanded by their own growth.

From our perspective, targeted asteroid mining (TAM) presents high initial costs but great potential for profits, lowering the costs of manufacturing future technologies. In fact, Forgan and Elvis argue that the expertise we would gain by creating the necessary infrastructure for asteroid mining could be brought to bear on other aspects of space exploration. Given its hazards, asteroid mining is likely to be turned over quickly to automated workers, putting an emphasis on developing advanced artificial intelligence as we evolve a post-biological culture.

ETIs which have similar economic concerns to ours will eventually find extraplanetary mining projects desirable as their own resources become depleted (provided of course they are sufficiently technologically advanced). We suggest the complexity of TAM missions are such that most species capable of it have the potential to become truly space-faring. If technological civilisations more advanced than ours exist in the Galaxy, a distinct possibility given the estimated median age of terrestrial planets being around 1 Gyr older than Earth (Lineweaver, 2001), and asteroid mining is a common activity which underpins their existence, then searching for signatures of TAM is an appropriate activity for SETI to undertake.

The Signature of Targeted Mining

All of which leads us to the kind of artificial observational signals we might hope to detect. The paper studies this question in relation to the Vega debris disk and finds three kinds of disequilibrium that might be created by asteroid mining at a large scale. The extraction of specific minerals and elements will create an imbalance in the disk, and the authors note the likelihood of iron and nickel mining, these being of practical use in large-scale space engineering projects, along with rarer elements such as platinum and palladium, useful in technological innovation. A sharp depletion in several of these species would be a potential marker.

So, too, would large-scale mining’s effects on the dynamics of a debris disk system, for we would expect these activities to result in the destruction of the larger asteroids in the system. Unusual temperature distributions are a third possible marker, created by the production of dust in the mining process. An anomalous dust source or an unusual temperature gradient in the disk would provide a potentially detectable signal. For that matter, variability in the disk as different locations are mined could also be detectable, although here we’re talking about future instrumentation, as what we have today probably isn’t sensitive enough to make such observations.

Potential for a Detection

Asteroid mining would be no easy catch. In fact, it’s best seen as part of a larger strategy, and may help us primarily in calling our attention to systems that demand further investigation. Having analyzed the signature from the various mining activities, the authors add:

The general trend is somewhat disappointing. For TAM to be detectable, it must be prolific and industrial-scale, producing a large amount of debris and disrupting the system significantly to be detected. However, instrumentation is continually improving, and sensitivity to such effects will only grow, reducing the constraints on detectability. What remains indefatigable with technological advance is the confusion of apparent TAM signals with natural phenomena. A detection of any one of these TAM signals can be explained with a simpler natural model, but detection of many (or all) of these signals in tandem will prove more difficult to model, and hence TAM more difficult to discount as a possibility.

So targeted asteroid mining appears unlikely to provide us with a conclusive detection of an extraterrestrial civilization, but tentative signals seen in unusual dust size distributions or deficits in chemical composition could be markers that tell us to look at a system more closely. Usefully, the markers of asteroid mining would, unlike biomarkers in an atmosphere, indicate not just life but an intelligent, technology-driven culture. For that reason, the authors argue that searching for asteroid mining signatures is a useful addition to the multi-wavelength, multi-signal SETI strategy that is now evolving as we extend our hunt far beyond conventional methods.

The paper is Forgan and Elvis, “Extrasolar Asteroid Mining as Forensic Evidence for Extraterrestrial Intelligence,” accepted for publication in the International Journal of Astrobiology (preprint). And if you’re not familiar with Iain Banks, do look into his novels about the Culture. His plots are ingenious, but I continue to marvel at his visual sense, and always take away images of places that are both astounding and inspiring. Oh to see technology used like this!