The fascination of the so-called ‘Pioneer anomaly’ is that it offers the possibility of new physics, an apparently constant acceleration on the Pioneer 10 and 11 probes with a value of (8.74 ± 1.33) × 10−10 m/s2 being something that we can’t easily explain. Equally useful is the chance the Pioneer anomaly gives us to validate current physical models by figuring out how we might explain this acceleration through hitherto unsuspected processes, perhaps aboard the spacecraft itself. Either way you look at it, the Pioneer anomaly has deserved the attention it has received, and now a new paper emerges to take a crack at resolving the issue once and for all. 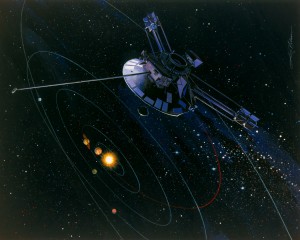 Frederico Francisco (Instituto Superior Técnico, Lisbon) and colleagues have revisited the question of whether heat that is emitted and reflected aboard the spacecraft could account for the anomalous acceleration. Francisco’s team had accounted for between 33% and 67% of the acceleration in a thermal model they developed in 2008. The new paper builds on this earlier work, with a methodology based on a distribution of point-like radiation sources that can model the thermal radiation emissions of the spacecraft. The authors then deploy a method called ‘Phong Shading’ that is commonly used to render the illumination of surfaces in 3D computer graphics. This allows them to study how heat effects can be reflected off the various parts of the spacecraft.

Image: An artist’s rendition of one of the Pioneer probes. Credit: NASA.

I referred to the acceleration as ‘apparently constant’ above, but the authors take pains to note that we haven’t fully characterized the acceleration. In fact, one analysis of the flight data shows that, given the data we have, both a constant acceleration and one with a linear decay of a period greater than fifty years are compatible with the data. This comes into play as the team tests for the constancy of the acceleration, as discussed in the paper:

… a so-called “jerk term” is found to be consistent with the expected temporal variation of a recoil force due to heat generated on board… This is essential if the hypothesis of a thermal origin for the Pioneer anomaly is to be considered, as such [a] source would inevitably lead to a decay with at least the same rate as the power available onboard. Possible causes for an enhanced decay include e.g. degradation of thermocouples, stepwise shutdown of some systems and instruments, etc.

With this in mind, the authors go to work looking at thermal radiation and the force it can bring to bear on a surface, using Phong Shading to model the reflection of this radiation off the various other surfaces of the Pioneer probes. Radiation facing outwards, for example, radiates directly into space with an effect that cancels out. But radiation emitted toward the center of the spacecraft is reflected by the high-gain antenna and the main equipment compartment. The trick is to weigh these effects in terms of the acceleration. The method gives “a simple and straightforward way of modeling the various components of reflection…,” according to the paper, and one that accounts for the effect of thermal radiation on different parts of the spacecraft.

The result: The Phong shading method confirms earlier work suggesting that the Pioneer anomaly results from heat effects aboard the spacecraft. It also offers a method with which to study similar effects aboard other spacecraft. The authors explain:

…the acceleration arising from thermal radiation effects has a similar order of magnitude to the constant anomalous acceleration reported [in a study of the anomaly published in 2002]. We believe that the chosen approach is most adequate for the study of this particular problem, taking into account all its specific characteristics. Moreover, this Phong shading method is well suited for future studies of radiation momentum transfer in other spacecraft.

And the paper concludes:

With the results presented here it becomes increasingly apparent that, unless new data arises, the puzzle of the anomalous acceleration of the Pioneer probes can finally be put to rest.

This is a useful result, and one that will now be scrutinized by the wider community. If its conclusions are accepted, we will have made a step forward in identifying an effect that may need to be taken into account in future spacecraft operations. Just as important, we’ll have been able to rule out a line of investigation that seemed to open a door into new physics, meaning that the analysis of the Pioneer Anomaly, now more than a decade old, has born fruit. This is exactly what good science should do, and while we might hope for breakthroughs into new theories, anomalies like these are just as valid as ways of testing and verifying accepted physical laws.

The paper is Francisco et al., “Modelling the reflective thermal contribution to the acceleration of the Pioneer spacecraft” (preprint).