Send a spacecraft into the outer Solar System and unexpected things can happen. We’re all anticipating the arrival of the New Horizons probe at Pluto/Charon in 2015, but the work the spacecraft has done along the way has recently been highlighted again. Moving toward Jupiter in 2007, New Horizons was programmed to image Jupiter’s ring system in the hope of catching details about an odd effect. Back in the 1990s, the Galileo probe had shown unusual patterns in the Jovian ring, and the New Horizons imagery was able to spot not only the patterns Galileo had seen but two new ripple patterns as well, evidence of recent events in the Jovian system. 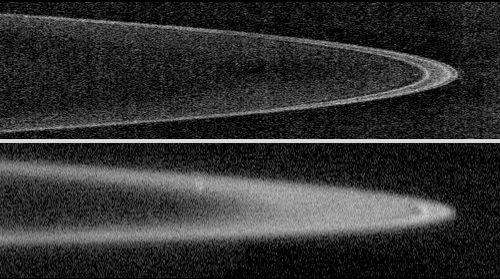 Image: The New Horizons spacecraft took the best images of Jupiter’s charcoal-black rings as it approached and then looked back at Jupiter in February 2007. The top image was taken on approach, showing three well-defined lanes of gravel- to boulder-sized material composing the bulk of the rings, as well as lesser amounts of material between the rings. New Horizons snapped the lower image after it had passed Jupiter on February 28, 2007, and looked back in a direction toward the sun. The image is sharply focused, though it appears fuzzy due to the cloud of dust-sized particles enveloping the rings. The dust is brightly illuminated in the same way the dust on a dirty windshield lights up when you drive toward a “low” sun. The narrow rings are confined in their orbits by small “shepherding” moons. Credit: New Horizons/JHU/APL.

Making sense of such patterns has involved the Cassini mission as well as New Horizons. In orbit around Saturn, Cassini has produced imagery of corrugations in Saturn’s innermost ring, called the D ring. It’s now believed, as discussed in two papers published online this week in Science, that both ring patterns are the result of an impact. In Jupiter’s case, that would be comet Shoemaker-Levy 9, which broke apart and blew through the Jovian ring system in 1994. The Saturnian ripples are likely the result of something similar, cometary debris that passed through the inner rings in 1983, although unseen by telescopes on Earth or in space at the time.

Matthew Hedman (Cornell University), Mark Showalter (SETI Institute) and colleagues studied the grooves in the D ring and determined that they appeared, over time, to wind together more tightly. Their work shows that this pattern would have originated when an event of some kind tilted the D ring off its axis by 100 meters in late 1983, with the gravity of Saturn then warping the ring into a tightening spiral. Subsequent Cassini imaging in 2009 revealed more details, and showed that the collision was huge, tilting a region more than 19,000 kilometers wide.

The scientists used the same techniques to study the pattern in Jupiter’s ring system, drawing on Galileo imagery from 1996 and 2000. Unwinding the ring pattern back in time as they did with Saturn, the duo found the event that tilted the Jovian ring off its axis would have occurred between June and September of 1994. The Shoemaker-Levy impact was in July of that year. Moreover, close study of the Galileo images has revealed a second spiral, which calculations indicate would have originated in 1990. Jupiter’s rings seem to be quite a lively place.

Add to this the fact that New Horizons has given us clues to yet another impact event, showing two new ripple patterns as well as the remaining effect from the Shoemaker-Levy impact. We begin to realize just how dynamic our Solar System remains even today, because we’re looking at a series of events that occurred within the last thirty years. Says Showalter:

“We now know that collisions into the rings are very common – a few times per decade for Jupiter and a few times per century for Saturn. Now scientists know that the rings record these impacts like grooves in a vinyl record and we can play back their history later.”

And we can tease more information out of these ring ‘signatures’ than their date of origin. Given that we’re likely dealing with a comet in each case, it’s helpful to remember how Shoemaker-Levy was pulled apart by Jupiter’s gravity before its famous collision with the planet. Causing a ring system to be knocked into a tilted orbit would not be the result of a single, solid object hitting the rings, but of an object that had been pulled apart, with a rain of small particles striking a broad ring region. We’re learning, then, about the objects moving through the outer system, and about their effect on the evolution of planetary rings, which themselves become what Joseph Burns (Cornell University) calls ‘witness plates to events in the distant past.’