The Earth is followed around the Sun by several Near Earth Asteroids in what are called ‘horseshoe orbits.’ Have a look at the NASA image below showing the orbital contours of such orbits. You can see the horseshoe shape, so called because the object’s apparent direction changes as seen by a viewer on the Earth. What’s happening is that the gravitational attraction of the Earth is changing the asteroid’s elliptical orbit. Even though the asteroid always orbits the Sun in the same direction, it cycles between catching up with the Earth and falling behind. It’s the relative motion of the object with relation to both the Sun and the Earth that produces the horseshoe effect. 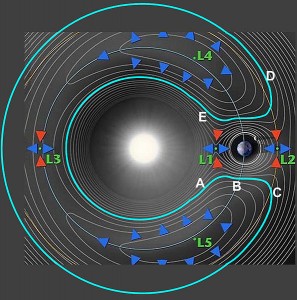 Image: Starting out at point A on the inner ring between L5 and Earth, the satellite is orbiting faster than the Earth. It’s on its way toward passing between the Earth and the Sun. But Earth’s gravity exerts an outward accelerating force, pulling the satellite into a higher orbit which – counter-intuitively – decreases its speed. When the satellite gets to point B, it is traveling at the same speed as Earth. Earth’s gravity is still accelerating the satellite along the orbital path. The satellite moves into a higher orbit. Eventually, at C, the satellite reaches a high enough, slow enough orbit and starts to fall behind Earth. It then spends the next century or more appearing to drift ‘backwards’ around the orbit. Remember that its orbit around the Sun still takes only slightly more than one Earth year and the apparent backwards motion is only relative to the Earth. Eventually the satellite comes around to point D. Earth’s gravity is now reducing the satellite’s orbital velocity, causing it to fall into a lower orbit, which actually speeds up the satellite. This continues until the satellite’s orbit is lower and faster than Earth’s orbit. It begins moving out ahead of the earth. Over the next few centuries it completes its journey back to point A. Image credit: NASA. Caption: Wikipedia.

The most recent addition to the list of objects in horseshoe orbits around the Earth is asteroid 2010 SO16, discovered by the WISE (Wide-field Infrared Survey Explorer) satellite. New work out of Armagh Observatory in Northern Ireland has now determined that, unlike other such objects, 2010 SO16 has been following the Earth on its orbit for at least 250,000 years. Other ‘horseshoe companions’ remain in this configuration for several thousand years before moving on to other orbits. Moreover, 2010 SO16 has an estimated diameter of 200-400 meters, making it easily the largest of the Earth’s horseshoe asteroids.

The object takes 175 years to travel from one end of the horseshoe to the other, in an orbit quite similar to the Earth’s. Apostolos Christou, one of the authors of the paper on this work, calls the asteroid ‘terraphobic,’ and adds “It keeps well away from the Earth. So well, in fact, that it has likely been in this orbit for several hundred thousand years, never coming closer to our planet than 50 times the distance to the Moon.” Which is, in fact, where it is right now, near the end of the horseshoe trailing the Earth.

Christou and colleague David Asher at Armagh went to work on the object’s orbital stability by creating simulations that modeled the behavior of the asteroid for every orbit it could occupy, running the simulations two million years into the past and the future. All the ‘virtual’ asteroids they plugged into this model remained in the horseshoe orbit with respect to the Earth. So 2010 SO16 has been out there for a long time. What we don’t know at this point is its origin.

Three possibilities present themselves. From the paper:

The existence of this long-lived horseshoe raises the twin questions of its origin and whether objects in similar orbits are yet to be found. The object’s Earth-like orbit makes a direct or indirect origin in the main belt an unlikely, although not impossible, proposition… Another plausible source is the Earth-Moon system. Margot & Nicholson (2003) have suggested that 54509 may have originated within the Earth-Moon system. SO16’s current orbit does not provide such a direct dynamical pathway to the Earth-Moon system as in that case, although the situation is likely to change within a timescale of several times 105 yr. A third possibility is that the object originated near the Asteroid-Earth-Sun L4 or L5 equilibrium point as a tadpole librator.

By ‘tadpole librator.’ Christou and Asher mean objects in so-called ‘tadpole orbits’ around the L4 and L5 Lagrangian points. Objects in these orbits do not move as far from the Earth as objects in horseshoe orbits. At the L4 and L5 points 60 degrees ahead of and behind the Earth in its orbit, it is possible that material left over from the formation of the inner planets may remain. Out of this population may have come the asteroids in horseshoe orbits we see today. Finding out more about such a population would require, say the authors, a space-based observatory in a heliocentric orbit inside that of the Earth, a mission we’re unlikely to see mounted any time soon.

But we can continue to study 2010 SO16 from the ground, starting with its color. Christou and Asher are quoted in this Armagh Observatory news release as saying they’re interested in the object’s color as a marker for its origin:

“Colour, a measure of an asteroid’s reflectivity across the electromagnetic spectrum, can tell you a lot about its origin,” they explain. “With this information we can start testing possible origin scenarios with hard data. If it proves to be unique in some way, it may be worth sending a probe to study it up close, and perhaps bring back a sample for laboratory scrutiny.”

The paper is Christou and Asher, “A long-lived horseshoe companion to the Earth,” in press at Monthly Notices of the Royal Astronomical Society (preprint).