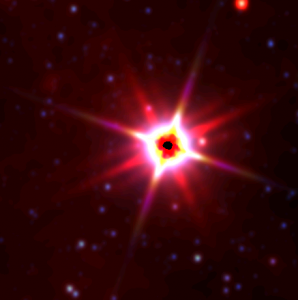 Data from the first 57 percent of the sky surveyed by the WISE mission (Wide-Field Infrared Survey Explorer) are now available and accessible through the online archive. You can dig into the archive hunting for WISE imagery right now, as I did this morning to retrieve this Alpha Centauri image. The WISE team has put up a help page on the image data service with useful information about how to find and work with color images. The method is straightforward: You enter a name or set of coordinates for stars, nebulae or galaxies, choose the size of the image to retrieve (the defaults bring you images from each of the four WISE detectors), and select three of the four WISE bands to pull up a color image that combines their results.

Play around with the help page a bit and you’ll quickly become familiar with the setup, and there is further help available within the archive itself. We have much more to come from WISE, with the complete survey, including improved data processing, scheduled for release about a year from now. But thus far the early count from WISE is rich, including nearby objects ranging from twenty comets to over 33,000 asteroids between Mars and Jupiter and 133 Near-Earth Objects. And in the deep sky, the haul is huge. Says Fengchuan Liu, project manager for WISE at the Jet Propulsion Laboratory:

“We are excited that the preliminary data contain millions of newfound objects. But the mission is not yet over — the real treasure is the final catalog available a year from now, which will have twice as many sources, covering the entire sky and reaching even deeper into the universe than today’s release.”

We now move toward making these objects available to astronomers for follow-up study, meaning that, as principal investigator Ned Wright puts it, “Starting today thousands of new eyes will be looking at WISE data, and I expect many surprises.” Leaning about new brown dwarf discoveries in the neighborhood of the Sun is certainly high on my list of interests, as is resolving the issue of whether a large object in the inner Oort Cloud could be disrupting cometary orbits there. The useful thing about surveys is that they turn up surprises because they’re open to the entire sky, rather than focusing on a single set of targets. You can be sure that the most intriguing WISE discoveries will be fodder for quick follow-up observations by other observatories. 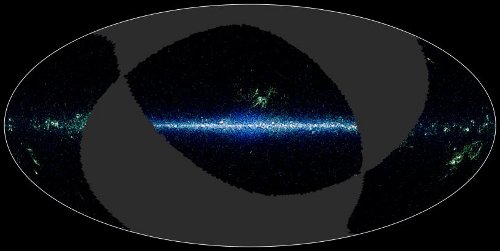 Image: A map of the portion of the sky covered by the preliminary release of WISE data. The fuzzy line down the middle is our Milky Way galaxy, and bright clouds are star-forming complexes. The gray regions are the part of the sky not available in the preliminary WISE data release. For the regions with data, the colors used are representational: blue and cyan (blue-green) represent data from the 3.4- and 4.6-micron detectors aboard WISE, and green and red represent data from the 12- and 22-micron detectors. The blue and cyan reveals mostly light from stars, while the green and red come from mostly warm dust. Credit: NASA/JPL-Caltech/UCLA.

WISE scanned the entire sky while collecting images taken at four infrared wavelengths of light accumulating a total of over 2.7 million images. And although its hydrogen coolant ran out in October of last year, two of its four infrared channels remained operational for an extended mission covering four more months, sweeping for asteroids and comets in the main asteroid belt. The satellite is now in hibernation, but astronomers here on Earth will be busy for years looking for the hidden gems WISE has uncovered. And as they go to work on new data, be aware that the first six of eighteen segments forming the James Webb Space Telescope’s primary mirror will begin final cryogenic testing this week. Things can seem to move at a glacial pace when we’re anticipating new discoveries, but step by step we’re getting there.