The study of carbon monoxide found in the atmosphere of Pluto — a strong signal rendered in data from the James Clerk Maxwell Telescope in Hawaii — gives us insight into the significant changes happening to the dwarf planet on its 248-year orbital path around the Sun. Pluto is one of a kind, offering us a cold planetary atmosphere that shows marked changes over time, an atmosphere that may at times freeze out and settle to the surface. No other dwarf planet is known to have an atmosphere, and Pluto’s is now known to vary in pressure and probably in composition.

Jane Greaves (University of St. Andrews) led the team doing the new Pluto work, and she’s the first to admit that what the data revealed was a surprise. Pluto reached perihelion in 1989, its closest approach to the Sun, so astronomers assumed that as it began to recede, the atmosphere would contract. But as measured by the occultation of background stars, the atmospheric pressure and size actually increased between 1988 and 2002, even as the surface ice reddened and brightened around the northern pole as it began to experience more sunlight.

We’re looking at a world where the atmosphere and the surface are strongly coupled, with the sublimation of ices pumping gas into the atmosphere. That means that seasonal changes on Pluto drive changes to the gas abundances, and it has been observed that temperatures in the atmosphere (around 100 K) are much higher than at the surface (roughly 40 K). This is a fragile atmosphere, and one that is easy prey to the solar wind, which may be driving some of it into space. Some of these gases may in fact be forming a tail in the manner of a comet.

We’ve found through spectroscopy of surface ice that frozen nitrogen is readily available, and it is assumed that nitrogen dominates the atmosphere, which also includes methane and the aforementioned carbon monoxide. Greaves’ team believes the latter acts as a thermostat, being the strongest coolant. The new data show that an atmosphere previously measured as a hundred kilometers thick now extends to a height of more than 3000 kilometers, and the carbon monoxide signature detected is twice that of an earlier study in 2000. Says Greaves:

“The change in brightness over the last decade is startling. We think the atmosphere may have grown in size, or the carbon monoxide abundance may have been boosted.” 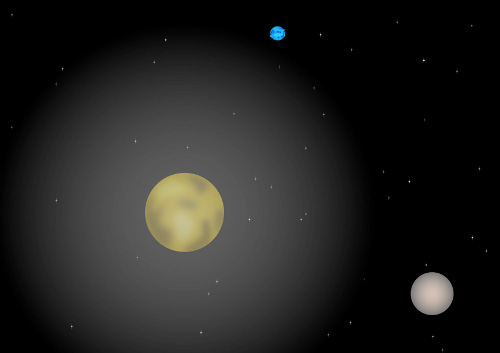 Image: Artist’s impression of Pluto’s huge atmosphere of carbon monoxide. The source of this gas is erratic evaporation from the mottled icy surface of the dwarf planet. The Sun appears at the top, as seen in the ultra-violet radiation that is thought to force some of the dramatic atmospheric changes. Pluto’s largest moon, Charon, is seen at the lower right. Credit: P.A.S. Cruickshank.

The presence of both methane and carbon monoxide in this atmosphere poses interesting issues. We can assume that light from the Sun heats surface ices that in turn evaporate. Carbon monoxide, acting as a coolant, has the opposite effect of methane, which absorbs sunlight and thus produces heating. But both of these gases are merely trace elements in an atmosphere that is thought to be dominated by nitrogen. The carbon monoxide, then, depending on the balance between it and the methane, could help cool the atmosphere, but it could also lead to all the atmospheric gases freezing out. Pluto’s is a fragile and tenuous atmosphere indeed, with its highest layers, at least at times, being blown away by the solar wind.

Observation in the decades ahead will help us understand how this delicate balance plays out as Pluto moves inexorably away from the Sun. From the paper:

Since surface changes… and the gaseous methane abundance… are seen to be temporally variable, time-dependent models will be needed to balance the effects of heating, cooling, sublimation and solar irradiation. Further CO line monitoring is underway, and N2 gas can be detected for the first time with ultraviolet spectroscopy…by the ALICE spectrograph on New Horizons… Hence atmospheric models can be tested from data taken before and during the 2015 flyby.

Is Pluto forming a comet-like tail, as study of the carbon monoxide line’s redshift seems to indicate? That’s one interpretation of the new data, but much work lies ahead. Greaves and company note that the recent increase in the brightness of the carbon monoxide line could be caused by the sublimation of surface ice, but add that the effect could also be caused by increases in atmospheric pressure of the kind that have been previously detected. And marked surface changes have occurred over intervals as short as a year on the distant world, so we’re seeing an atmosphere in movement as gas densities and abundances change, driven by heat.

“Seeing such an example of extra-terrestrial climate-change is fascinating”, says Greaves. “This cold simple atmosphere that is strongly driven by the heat from the Sun could give us important clues to how some of the basic physics works, and act as a contrasting test-bed to help us better understand the Earth’s atmosphere.”