Although we’re finding more and more exoplanets, we can always use another technique besides radial velocity, transit searches, direct imaging and microlensing. And now Jonathan Nichols (University of Leicester) has proposed one at the Royal Astronomical Society’s meeting in Llandudno, Wales, which concluded its proceedings yesterday. Nichols has the notion of looking for the radio emissions generated by the aurorae of planets like Jupiter, believing that these could be detected by radar telescopes like the soon to be completed LOFAR.

Now LOFAR (Low Frequency Array) is quite a story in itself, being the largest radio telescope ever constructed. The idea here is to create a vast array of some 7000 small antennae, distributed among some 77 larger stations across the Netherlands, Germany, Great Britain, France and Sweden. You wind up with a total collecting area whose interferometric data can be processed by a supercomputer at the University of Groningen in the Netherlands. The key here is to bring huge new sensitivity to radio frequencies below 250 MHz. In fact, LOFAR will reach down to about 10 MHz.

And that takes me right back to my childhood, working with an old Hallicrafters shortwave receiver. I had read that Jupiter could outshine the Sun at the wavelengths my receiver could detect, and today we know that interactions between Jupiter and Io can provide a power source for the radio emissions that move away from the planet’s magnetic poles in cone-shaped beams. It was possible to pick up oddball noises — people always describe them as staccato sounds like woodpeckers banging on the side of a house, and sometimes slow, swelling sounds that evoke waves rushing in to a shore — and pulling them in on a desktop receiver was a thrill. The article Detecting Jupiter’s Radio Emissions is a good introduction to Jovian radio possibilities. 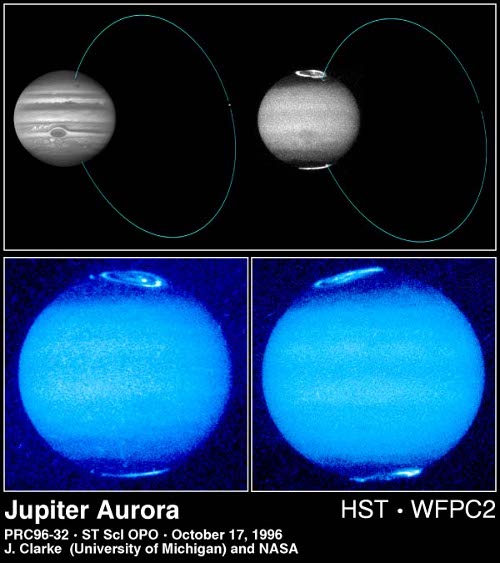 Image: The Hubble telescope’s view of the rapid, spectacular dance of luminescent gases high in Jupiter’s atmosphere is allowing astronomers to map Jupiter’s immense magnetic field and better understand how it generates such phenomena. The ultraviolet-light images [bottom frames] show how the auroral emissions change in brightness and shape as Jupiter rotates. The aurorae are the bright, circular features at the top and bottom of the planet. The top panel illustrates the effects of emissions from Io, one of Jupiter’s moons. Io ejects an invisible electrical current of charged particles that flow along the planet’s magnetic field lines. Credit: ESA.

But back to Nichols, who told the RAS meeting in Llandudno that the LOFAR antennae will be sufficiently sensitive to detect the kind of emissions Jupiter makes in our own Solar System, even when they occur in systems many light years away:

“This is the first study to predict the radio emissions by exoplanetary systems similar to those we find at Jupiter or Saturn. At both planets, we see radio waves associated with auroras generated by interactions with ionized gas escaping from the volcanic moons, Io and Enceladus. Our study shows that we could detect emissions from radio auroras from Jupiter-like systems orbiting at distances as far out as Pluto,” said Nichols.

This is useful stuff, for we’d like to find more solar systems something like our own, thinking that these might be prime candidates for terrestrial-class worlds in inner orbits. But finding a Jupiter or a Saturn using transit or radial velocity methods would be a long process, given their distance from the central star. Nichols believes that planets orbiting UV-bright stars at distances between 1 and 50 astronomical units would generate enough radio power to be detectable from Earth. In the best case scenario, we should be able to detect such planets 150 light years away.

The paper is Nichols, “Magnetosphere-ionosphere coupling at Jupiter-like exoplanets with internal plasma sources: implications for detectability of auroral radio emissions,” accepted by Monthly Notices of the Royal Astronomical Society (preprint).