Aftermath of an Asteroid Collision

Back in the days when the Solar System seemed a simpler place, asteroids were thought to be chunks of rocks whose features could be explained by impacts with other such objects. Comets were altogether different, laden with icy material that erupted when heated by the Sun. It was a straightforward picture, at a time when the system had nine planets, icy ‘dwarf planets’ were not yet in vogue, and distinctions between orbiting objects were clearly drawn. Today we work with a more complicated scenario, one in which some objects once thought of as asteroids develop comet-like features that can last for months.

Thus the interest in the asteroid called (596) Scheila, which late last year developed plumes after brightening unexpectedly in December. Orbiting the Sun every five years, Scheila has a diameter of about 110 kilometers, and evidence from both the Hubble Space Telescope and the Swift satellite now indicates that the unusual activity here was caused by a collision with a smaller asteroid. This is useful stuff, because the first asteroid collision identified — in 2009 involving asteroid P/2010 A2 — showed no collision fragments, whereas Scheila’s activity was caught quickly after the collision, when evidence for what happened was readily available. 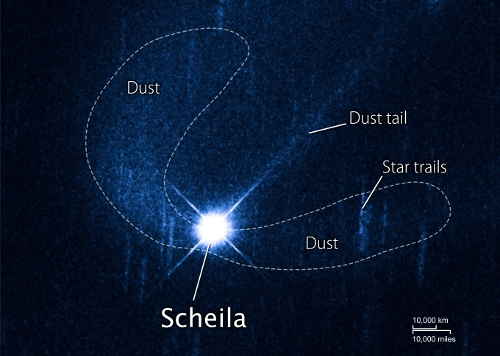 Image: The Hubble Space Telescope imaged (596) Scheila on Dec. 27, 2010, when the asteroid was about 350 million kilometers away. Scheila is overexposed in this image to reveal the faint dust features. The asteroid is surrounded by a C-shaped cloud of particles and displays a linear dust tail in this visible-light picture acquired by Hubble’s Wide Field Camera 3. Because Hubble tracked the asteroid during the exposure, the star images are trailed. Credit: NASA/ESA/D. Jewitt (UCLA).

The evidence came in the form of images showing the asteroid with two dust plumes, signs of dust particles being pushed away from the object by sunlight. Archival images show the outburst began between November 11 and December 3 of 2010, and it was on December 11 that the Catalina Sky Survey, which focuses primarily on near-Earth objects, discovered that Scheila had brightened to twice the norm and had begun to display a comet-like aura.

But a follow-up spectrum taken with the Swift satellite’s Ultraviolet/Optical Telescope showed none of the emissions commonly associated with comets, and there was no indication of gases that would flag suddenly exposed ice. The current thinking is that a small asteroid struck Scheila at an angle of less than 30 degrees, leaving a 300-meter crater. It was an impact with a wallop, says Michael Kelley (University of Maryland), a co-author of the paper on this work:

“The dust cloud around Scheila could be 10,000 times as massive as the one ejected from comet 9P/Tempel 1 during NASA’s UMD-led Deep Impact mission. Collisions allow us to peek inside comets and asteroids. Ejecta kicked up by Deep Impact contained lots of ice, and the absence of ice in Scheila’s interior shows that it’s entirely unlike comets.”

The impactor would have been traveling about 17,000 kilometers per hour, striking with the force of at least a 100-kiloton nuclear bomb. It is thought that most of the dust from the collision fell back to the asteroid, but the material that escaped formed plumes that, as seen in the Hubble images taken two weeks after the event, had quickly begun to dissipate. A scant two months after the outburst, there was no sign of the plumes at all. It’s likely that collisions of this kind happen frequently in the main belt, offering a cautionary tale for those keeping an eye on asteroids closer to home.

Next post: A Super-Earth in Transit (and a SETI Digression)