With asteroid 2005 YU55 making a close pass later this year, it’s worth remembering that we’ve had a look at this near-Earth object before. It was in April of 2010 that the asteroid, discovered through the efforts of the SpaceWatch Program at the University of Arizona, was deftly imaged by the Arecibo Radio Telescope. That first look was helpful in several ways, the most immediate being that it allowed scientists to rule out the possibility of an Earth impact for the next 100 years. The radar image is fuzzy, but bear in mind that this is an object no more than 400 meters in size, and as the 7.5-meters-per-pixel resolution can make out, it’s spherical in shape. 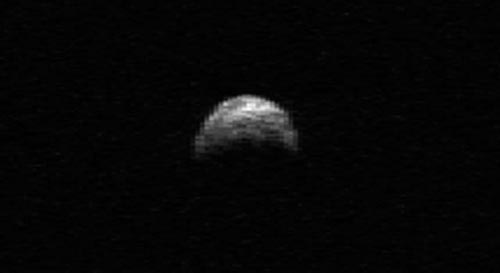 Image: This radar image of asteroid 2005 YU55 was generated from data taken in April of 2010 by the Arecibo Radar Telescope in Puerto Rico. Image credit: NASA/Cornell/Arecibo.

The next close pass will be on November 8, when 2005 YU55 will close to within about 325,000 kilometers. And this time around, we should learn a great deal more about the object. Barbara Wilson (JPL) points out that we’re now better equipped to make use of its proximity:

“While near-Earth objects of this size have flown within a lunar distance in the past, we did not have the foreknowledge and technology to take advantage of the opportunity. When it flies past, it should be a great opportunity for science instruments on the ground to get a good look.”

The imagery from 2010 was made from a distance of 2.3 million kilometers, but this fall we’ll be able to look at it at 4-meter resolution when it is seven times closer. The recently upgraded Deep Space Network facility at Goldstone, California should produce images with much greater detail, helping us nail down its rate of rotation and discern features on its surface. The broader picture is that work at Goldstone and Arecibo, aided by optical and infrared observations from other telescopes, should help us pin down the mineral composition of the asteroid. Wilson adds:

“This is a C-type asteroid, and those are thought to be representative of the primordial materials from which our solar system was formed. This flyby will be an excellent opportunity to test how we study, document and quantify which asteroids would be most appropriate for a future human mission.”

It’s interesting to note just how effective our radar observations of asteroids have been. Between them, Goldstone and Arecibo have observed 272 near-Earth asteroids and 14 comets with radar. And while it’s true that Arecibo’s radar is about twenty times as sensitive as Goldstone’s, the Arecibo dish is fixed, whereas Goldstone’s is fully steerable, allowing it to track objects for longer periods per day and image them at a finer spatial resolution. No doubt about it, 2005 YU55’s November pass will be worth watching as we continue to build our database of near-Earth objects and learn essential details about their composition.

Previous post: A Super-Earth in Transit (and a SETI Digression)