Gravity Probe B has confirmed two of the most interesting effects predicted by Einstein’s General Theory of Relativity. The geodetic effect, which describes the warping of spacetime due to the mass of the Earth, has been confirmed to an accuracy of 0.28 percent. The frame-dragging effect, in which the Earth’s rotation drags or stirs local spacetime, is confirmed to 19 percent accuracy. All of this from a project that drew on 34 years of research and development, 10 years of flight preparation and 5 years of analysis of the data returned from a 1.5 year mission. They were a long time coming, but these results are as much milestones in the history of physics as the 1919 measurements of Sir Arthur Eddington that supported Einstein’s newly published theory.

Measuring known effects to higher levels of accuracy is key to physics. It has taken so long to achieve these results because General Relativity is hard to test in the vicinity of the Earth, where its effects are so slight as to fade into the background noise. Gravity Probe B (GP-B) was built to surmount this problem by performing its experiments in an orbiting laboratory where the background noise could be effectively muted. At the heart of the effort were four gyroscopes held in a flight probe that was inserted into a dewar — a vacuum flask — that held 613 gallons of superfluid, supercold helium, keeping the instrument chilled to 2 Kelvin (-271 degrees Celsius).

Launched into a 645-kilometer orbit, Gravity Probe B’s science instrument measured the changes in the directions of spin of the gyroscopes, using a telescope referencing the star IM Pegasi as a fixed measuring point. The gyros were so free of background disturbances that they constituted an ideal measuring system. According to General Relativity, the direction of the spin axis of the gyroscopes should change over time because of the mass and rotation of the Earth, and these effects are what has been confirmed, showing that spacetime is indeed warped by the presence of the Earth, and twisted or dragged by the rotation of the Earth as well.

Kip Thorne (Caltech) once noted how subtle the effects under study by Gravity Probe B really are: “In the realm of black holes and the universe, the language of general relativity is spoken, and it is spoken loudly. But in our tiny solar system, the effects of general relativity are but whispers.” Hearing those whispers allows us to take earlier confirmations of General Relativity to a new level of precision, providing a measurement of the shape of local spacetime.

The geodetic warping of spacetime is usually explained through the image of a sheet of rubber on which a ball has been dropped, thus deforming the rubber. But I prefer the ‘missing inch’ explanation. It’s a bit of a thought experiment, though it can be replicated with a sheet of paper and a pair of scissors. Imagine a circle with the same circumference as the Earth, about 40,000 kilometers. A gyroscope that follows this path in empty space should always point in the same direction, as the diagram below illustrates. But General Relativity says that if the Earth were placed inside the circle, its mass would warp spacetime just enough to shrink the circumference of the circle by 1.1 inches.

Cut a small wedge out of a circular piece of paper and then tape the edges back together. The result is not a circle but a cone, a representation of what happens to spacetime as the result of mass (Thorne did a demonstration of this at the Gravity Probe B pre-launch news conference, video of which is available here). The gyroscope following this slightly altered path now shows a measurable shift as it moves around the edge of the cone, as shown in the second panel of the diagram. 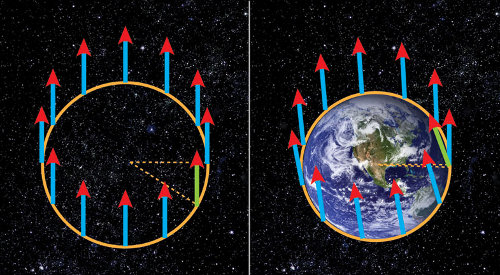 Image: Left panel: A circle with Earth’s equatorial diameter (~12,755 km) in empty space has a circumference of roughly 40,074 km. A gyroscope following this circular path in empty space will always point in the same direction, as indicated by the arrows. Right panel: Earth’s mass warps spacetime inside the circle into a cone, formed by removing a pie-shaped wedge (dotted lines). This reduces the circle’s circumference by 1.1 inches. A gyroscope will now change its orientation while tracing the conical path. Credit: Stanford University/NASA.

Frame dragging, the other effect measured by Gravity Probe B, refers to the way a rotating body drags spacetime around with it. Because of the parallel between this effect and the way an electrically charged body generates magnetism as it rotates, the frame dragging effect is often called the ‘gravitomagnetic effect.’ Gravity Probe B’s researchers measured the spin-axis alignment of each of its gyroscopes as the spacecraft orbited the Earth, looking at change both in the plane of the orbit (this measured geodetic precession) and orthogonally in the plane of the Earth’s rotation (this measured frame-dragging precession). You can read more about Gravity Probe B’s design and how it made these measurements at this Stanford website. 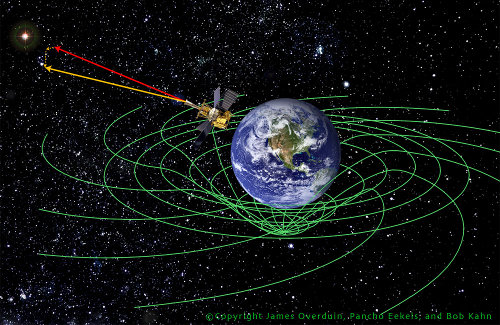 We’ve already had measurements of the geodetic effect, although GP-B has been able to refine that measurement considerably, but the new work on frame-dragging marks the first time it has been measured directly. Having confirmed that frame-dragging exists, the plan is to use these measurements to extrapolate what we’ve found around the Earth to more exotic objects, like black holes. “Einstein survives,” said Francis Everitt, who led the Gravity Probe B effort, and that survival should help us tighten our understanding of extreme astrophysical environments. Moreover, it will help us work toward a still more comprehensive theory. After all, the breakdown of General Relativity in singularities, where the curvature of spacetime becomes infinite and the field equations fail, points to how much we have yet to learn about the cosmos.