The far future may be a lonely place, at least in extragalactic terms. Scientists studying gravity’s interactions with so-called dark energy — thought to be the cause of the universe’s accelerating expansion — can work out a scenario in which gravity dominated in the early universe. But somewhere around eight billion years after the Big Bang, the continuing expansion and consequent dilution of matter caused gravity to fall behind dark energy in its effects. We’re left with what we see today, a universe whose expansion will one day spread galaxies so far apart that any civilizations living in them won’t be able to see any other galaxies.

The initial dark energy findings, released in 1998, were based on Type Ia supernovae, using these as ‘standard candles’ which allowed us to calculate their distance from Earth. Now we have new data from both the Galaxy Evolution Explorer satellite (drawing on a three-dimensional map of galaxies in the distant universe containing hundreds of millions of galaxies) and the Anglo-Australian Telescope (Siding Spring Mountain, Australia). Using this information, scientists are studying the pattern of distance between individual galaxies. Here we have not a ‘standard candle’ but a ‘standard ruler,’ based on the tendency of pairs of galaxies to be separated by roughly 490 million light years.

A standard ruler is an astronomical object whose size is known to an approximate degree, one that can be used to determine its distance from the Earth by measuring its apparent size in the sky. The new dark energy investigations used a standard ruler based on galactic separation. Scientists believe that acoustic pressure waves ‘frozen’ in place approximately 370,000 years after the Big Bang (the result of electrons and protons combining to form neutral hydrogen) define the separation of galaxies we see. The pressure waves, known as baryon acoustic oscillations, left their imprint in the patterns of galaxies, accounting for the separation of galactic pairs. This provides a standard ruler that can be used to measure the distance of galaxy pairs from the Earth — closer galaxies appear farther apart from each other in the sky.

We’re looking, then, at patterns of distance between galaxies, using bright young galaxies of the kind most useful in such work. Galaxy Evolution Explorer identified the galaxies to be studied, while the Anglo-Australian Telescope was used to study the pattern of distance between them. Folding distance data into information about the speeds at which galaxy pairs are receding confirms what the supernovae studies have been telling us, that the universe’s expansion is accelerating. GALEX’s ultraviolet map also shows how galactic clusters draw in new galaxies through gravity while experiencing the counterweight of dark energy, which acts to tug the clusters apart, slowing the process.

Chris Blake (Swinburne University of Technology, Melbourne), lead author of recent papers on this work, says that theories that gravity is repulsive when acting at great distances (an alternative to dark energy) fail in light of the new data:

“The action of dark energy is as if you threw a ball up in the air, and it kept speeding upward into the sky faster and faster. The results tell us that dark energy is a cosmological constant, as Einstein proposed. If gravity were the culprit, then we wouldn’t be seeing these constant effects of dark energy throughout time.” 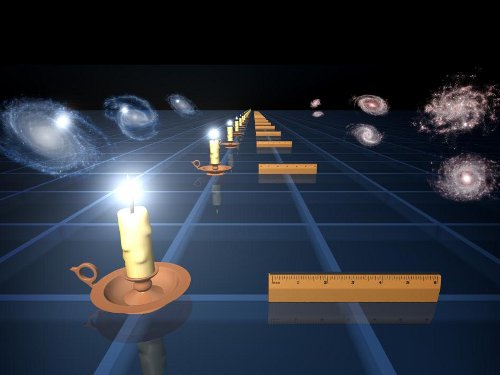 Image: This diagram illustrates two ways to measure how fast the universe is expanding. In the past, distant supernovae, or exploded stars, have been used as “standard candles” to measure distances in the universe, and to determine that its expansion is actually speeding up. The supernovae glow with the same intrinsic brightness, so by measuring how bright they appear on the sky, astronomers can tell how far away they are. This is similar to a standard candle appearing fainter at greater distances (left-hand illustration). In the new survey, the distances to galaxies were measured using a “standard ruler” (right-hand illustration). This method is based on the preference for pairs of galaxies to be separated by a distance of 490 million light-years today. The separation appears to get smaller as the galaxies move farther away, just like a ruler of fixed length (right-hand illustration). Credit: NASA/JPL-Caltech.

“Observations by astronomers over the last 15 years have produced one of the most startling discoveries in physical science; the expansion of the universe, triggered by the Big Bang, is speeding up. Using entirely independent methods, data from the Galaxy Evolution Explorer have helped increase our confidence in the existence of dark energy.”

Next post: Progress Toward the Dream of Space Drives and Stargates