Starship Fuel from the Outer System

Adrian Mann has done it again, as witness his illustration of a gas mining operation on Uranus, reproduced below. The idea, as explored by Adam Crowl on Discovery News this morning, is to acquire vast amounts of helium-3 to supply not only Earth’s energy needs but the fusion engines of the Project Icarus star probe. I love Adrian’s work and particularly his Project Daedalus images, on display along with much of his other work in his online gallery. What he manages to do is to take an engineering concept and translate it into images that are both accurate yet stunning. It’s easy to forget, until he reminds us, that hard-nosed equations and their resulting designs can lead to extraordinary vistas, a result that reawakens the sense of wonder. 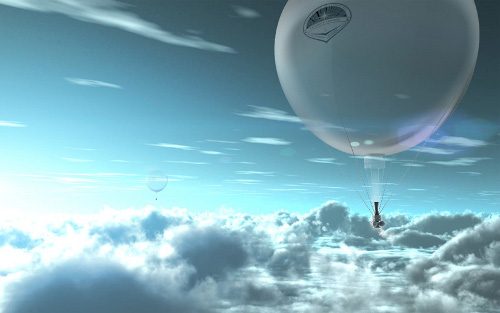 Image: Balloons, like those shown here in the atmosphere of Uranus, could be used to harvest helium-3 as starship fuel for Project Icarus. Credit: Adrian Mann.

Adam Crowl is a frequent Centauri Dreams contributor, but he’s also deep in the Project Icarus effort, serving as its module lead for fuel and fuel acquisition. And fuel is the heart of the problem. Deuterium (hydrogen with an added neutron) and the isotope of helium known as helium-3 (containing one less neutron than helium-4, or regular helium) create the kind of reaction Icarus needs. The method is preferable to the fusion of deuterium with tritium because the latter releases about 80 percent of the fusion energy in the form of high-energy neutrons. To avoid that kind of heat transfer to the engine, the original Project Daedalus team focused on deuterium/helium-3, which continues to be the method of choice for the Icarus designers.

But where to get the helium-3, which is found only in tiny amounts on our own planet? You might think the Moon would be useful, given that the solar wind has deposited perhaps as much as 2.5 million tons of the stuff in the lunar regolith. But Icarus has had a long look at lunar mining, and finds that the energy needed to extract it would be greater than what it would eventually produce. That leads us back to the gas giants — Project Daedalus focused on Jupiter for helium-3 extraction, conceiving of a giant mining operation using floating factories in the atmosphere.

But Uranus may be the better choice, and that leads to quite an interesting infrastructure. Here’s Adam’s take on the advantages of Uranus, and the technology needed to exploit them:

…as a mining site it has several advantages. The surface gravity, which is defined from the 1 bar pressure level in a gas giant’s atmosphere, is 90 percent that of Earth’s and the speed needed to reach low orbit is lowest of all the gas planets. Uranus’s rings are also high, thin and not showering the atmosphere below with a hail of meteors, unlike Saturn’s.

Accessing the gas riches of Uranus will require nuclear power, however. Designs exist for nuclear powered ramjets that could fly indefinitely in the atmospheres of the gas giants — this might prove a viable means of keeping an extraction factory aloft. Else we’ll be back to using balloons like “Project Daedalus,” serviced by nuclear ramjets.

An atmosphere composed of a cold gas mix that is lighter than helium and not much heavier than hydrogen, means that hot-air ballooning will need to be used. That the oldest technology of flight will find a role supporting the latest, fusion propulsion, has a certain poetic justice.

Getting the fuel home, where it can be used domestically as well as for tanking-up starships, could provide an early pay-off for developing a fusion propelled starship.

That payoff could involve a major change to how our planet gets its energy. Adam looks at world energy demands, which have increased historically at a rate of 2.5 percent per year. By 2100, which for the purposes of argument is chosen as the earliest date for the launch of a star probe like Icarus, 14,000 tons of deuterium/helium-3 fuel would supply world energy demand for a year. The same infrastructure that would return helium-3 from Uranus (conceived as a high-speed freighter built on fusion principles) would offer a continuing source of fuel on our own planet. Making such a case will be a key issue for the Icarus team, because finding the commercial incentive to develop Uranian gas mining is the only way to conceive of it happening.

Are there other options? Sure, and Project Icarus is examining them. If pure deuterium fusion can be put to work — this assumes finding ways to confine the excess neutrons in the plasma created by the reaction and holding down damage to the reactor walls — then we can look much closer to home for deuterium. Now we have a further incentive for a return to the Moon:

Unlike helium-3 we know the moon has large amounts of hydrogen, as ice, and a significant fraction of it will be deuterium. The moon’s low gravity also means that water composed of regular hydrogen and oxygen will escape quicker than heavy water, perhaps leading to a concentration of deuterium in the water of the moon. We won’t know until we return to the moon for a closer look.

We can also look at the fusion of boron-11 and hydrogen, a reaction that is hard to sustain and perhaps impossible to adapt for propulsion purposes. But so far the odds continue to favor deuterium/helium-3, which leads us invariably to the outer Solar System. Taking a long-term look at our possible future, the creation of an infrastructure that can mine the atmosphere of a gas giant would have to make financial sense in terms of energy production at home while serving as a testbed for the technologies that would push much deeper into space. The Daedalus designers glimpsed that infrastructure thirty years ago. We now re-examine their thinking to tune up the concept and bring it into line with the latest in fusion research.