A Trio of Black Hole Studies

Big explosions make news, as proven by ubiquitous reports in the popular media about a distant star that wandered too close to the black hole at the center of its galaxy. The beam of energy that resulted from its destruction was composed of high-energy X-rays and gamma rays, and was unusual not only for its brightness but its duration. The event has persisted for more than ten weeks as pieces of the star fell into the black hole, with a brightness at optical and infrared wavelengths that at its peak equalled that of a hundred billion suns.

How do you get a beam that bright? Evidently this one was pointed directly at our galaxy, concentrating the signature of the event into a small fraction of the sky. Andrew Levan (University of Warwick), says we saw the cataclysm only because “…our solar system happened to be looking right down the barrel of this jet of energy.” The source of the event, which is now called Swift 1644+57, is at the heart of a galaxy some 3.8 billion light years away.

“The best explanation that so far fits the size, intensity, time scale, and level of fluctuation of the observed event, is that a massive black hole at the very center of that galaxy has pulled in a star and ripped it apart by tidal disruption,” adds Levan. “The spinning black hole then created the two jets, one of which pointed straight to Earth.” 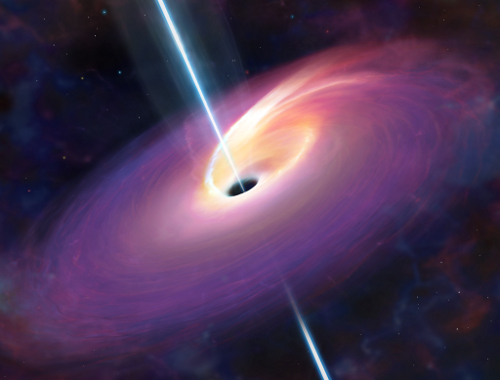 Image: An artist’s impression of the formation of two jets of energy at Swift 1644+57. Credit: University of Warwick / Mark A. Garlick.

Black Holes in the Early Universe

Looking down the barrel of such an event is a rarity indeed, but other recent studies augmenting our knowledge of black holes are equally impressive. A team of astronomers using images taken by the Chandra X-Ray Observatory, for example, has now detected the earliest black holes ever found. The most distant of the galaxies containing them are some 13 billion light years from Earth, so we are looking at black holes as they existed less than a billion years after the Big Bang. The astronomers could measure the X-ray signals being produced by the black holes as they consumed gas and dust.

These are tricky observations indeed, but the work confirms that the black holes grow along with their galaxies, revealing what Kevin Schawinski, a Yale astronomer who contributed to the discovery, calls “…a symbiotic relationship between black holes and their galaxies that has existed since the dawn of time.” Adds Yale cosmologist Priyamvada Natarajan:

“These observations indicate that extremely massive black holes already existed as early as 700-800 million years after the Big Bang, which suggests that either they were born massive to start with, or they experienced rapid growth bursts. Either scenario tells us much more than we previously knew, which is very exciting.” 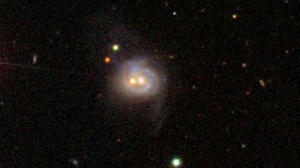 Finally, NASA’s Swift satellite and Chandra were again put to use in the discovery of a second massive black hole at the center of the nearby galaxy called Markarian 739 or NGC 3758, some 425 million light years away toward the constellation Leo. The two black holes are separated by approximately 11,000 light years. It’s now believed that most large galaxies — our Milky Way is no exception — house a supermassive black hole. Those galactic centers producing intense emissions are known as active galactic nuclei, found in about one percent of such galaxies. A binary AGN is rarer still.

“If two galaxies collide and each possesses a supermassive black hole, there should be times when both black holes switch on as AGN,” said coauthor Richard Mushotzky, professor of astronomy at UMCP. “We weren’t seeing many double AGN, so we turned to Chandra for help.”

Image: Viewed in visible light, Markarian 739 resembles a smiling face, with a pair of bright cores underscored by an arcing spiral arm. The object is really a pair of merging galaxies. Data from Swift and Chandra reveal the western core (right) to be a previously unknown AGN; past studies already had identified an AGN in the eastern core. The two supermassive black holes are separated by about 11,000 light-years. The galaxy is 425 million light-years away. Credit: SDSS

Markarian 739 is one of the nearest cases of a binary AGN. The paper on the discovery is Koss et al., “Chandra Discovery of a Binary AGN in Mrk 739,” accepted by Astrophysical Journal Letters (preprint). On Sw 1644+57, see Bloom et al., “A Possible Relativistic Jetted Outburst from a Massive Black Hole Fed by a Tidally Disrupted Star,” published online 16 June 2011 by Science (abstract). On early black holes, see Treister et al., “Black hole growth in the early Universe is self-regulated and largely hidden from view,” Nature 474 (16 June 2011), pp. 356–358 (abstract).