The return of the Genesis mission in 2004 was a spectacular event, its parachute failing to deploy upon re-entry, leading to a crash in the Utah desert that seemed to have destroyed the mission’s solar wind collectors. But Genesis was a tough bird and we’re getting good science from its remains. The latest news comes from study of an instrument designed to enhance the flow of solar wind onto a small target, with the aim of measuring oxygen and nitrogen. The Solar Wind Concentrator worked well and new papers out of Los Alamos National Laboratory have now appeared, with isotopic measurements of the Sun that illuminate our system’s formation. 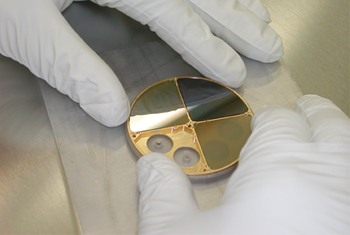 It’s astonishing that we have these results — Genesis flight payload lead Roger Wiens (LANL) calls Genesis “…the biggest comeback mission since Apollo 13″ — but ponder what we’ve got here. The spacecraft spent two years at the Sun-Earth L1 Lagrange point, some 1.5 million kilometers from Earth, collecting atoms of the solar wind, the stream of charged particles ejected from the Sun that flows outward through the Solar System. The mission’s highest goal was to determine the abundances of the stable isotopes of oxygen and nitrogen in the Sun. Oxygen contains three major isotopes: 16O, 17O, and 18O, while nitrogen’s stable isotopes are 14N and 15N.

“For nitrogen, Jupiter and the Sun look the same. It tells us that the original gaseous component of the inner and outer solar system was homogeneous for nitrogen, at least. So where did Earth gets its heavier nitrogen from? Maybe it came here in the material comets are made of. Perhaps it was bonded with organic materials.”

As to oxygen, the papers point to a mechanism called photochemical self-shielding, which may have modified the composition of space dust before it even began to form the planets. The Sun shows an enrichment of pure 160 relative to the Earth instead of differences in 160, 170 and 180 that are proportional to their atomic weight. That fact points to solar UV radiation uniformly enhancing the two rarer isotopes, 170 and 180, in the terrestrial planets. We have much to learn, but Genesis’ fine-grained isotope hunt is giving us clues to how the solar system formed. All this from a mission that crashed in the desert, and analytical techniques forged from necessity that drew results from apparent disaster.