Tau Zero journalist Larry Klaes gives us a look at a NASA publication whose authors tackle the biggest questions imaginable for our culture. Usefully, this volume, whose authors include major names in fields ranging from astrophysics to cultural evolution, is available online at no charge. As Larry points out, it deserves wide readership, for the issues of our place in the universe and how we respond to potential extraterrestrial contact via SETI will guide our future, both on Earth and in space.

It is often difficult to get a wider perspective on existence, especially when you and the rest of your species have been stuck in one place for all but the smallest and most recent of times. This has certainly been the case with the species known as humanity. While a few ancient philosophers guessed that we live on a world surrounded by an immense amount of stars and space, it has only been in the last few centuries that both the scientific and general communities came to accept this state of existence as a fact. It has been an even shorter period of time – mere decades – since we have sent our mechanical emissaries and a relative handful of actual humans into the nearest regions of our cosmic neighborhood.

Why are we fascinated with a realm that is unimaginably vast, difficult to attain, and even dangerous? Does that which occurs in space affect life on Earth, and in what ways? Are there other intelligent beings in the Universe and what may result if we should ever encounter one another? What will be the fate of all life far down the cosmic road?

Tackling these mighty subjects is a book titled Cosmos & Culture: Cultural Evolution in a Cosmic Context (NASA SP-2009-4802), edited by Steven J. Dick and Mark L. Lupisella. Most NASA publications deal with the illustrious history of the US space program, often going into great detail about the people, processes, and machines. Cosmos & Culture looks at the ultimate reasons why we want to explore and settle space and how that decision will affect our society and species. 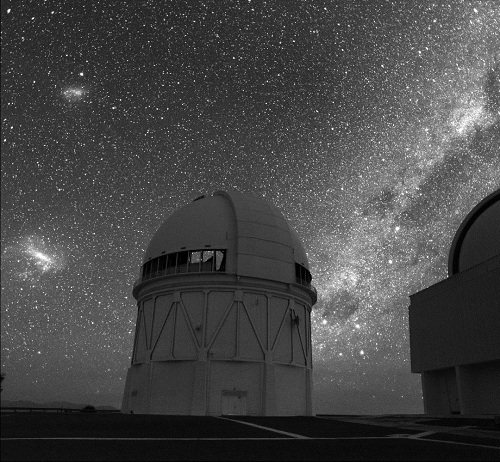 Image: The sky confronts us nightly with the immensity of the cosmos. Here we’re looking at southern skies from the vantage of the Cerro Tololo Inter-American Observatory atop a Chilean mountain. Look carefully and you’ll see both the Small and Large Magellanic Clouds, along with the great band of the Milky Way at right and the Southern Cross just to the right of the 4-meter telecope called Blanco. Credit: Roger Smith, AURA, NOAO, NSF.

This topic is refreshing to see in a work from the space agency: With many space missions, one can sometimes get only vague platitudes as to why we seek to know what is out there. This sometimes creates a sense that the rest of the Universe — and why science goes about studying it — has no real, immediate relation to human society. With Cosmos & Culture, professionals from a variety of fields look at the Universe from their particular perspectives and attempt to bring it all together to show why and how the evolution and development of the Cosmos is anything but esoteric for our own biological and cultural development.

The result is a combination of fascinating ideas that go beyond the usual NASA literature, though sometimes they tend to get rather bogged down in their own explanations. Add to this the fact that many of the ideas presented in this book are admittedly speculation and one tends to worry that the results will be akin to reading a tract on a new form of religion. Nevertheless, the authors are sincere and excited in their efforts here and one knows that even if some of the answers are not what the questioners assumed or hoped for, they do succeed in bringing home the fact that we are an integral part of a much larger world than most of our forbearers could even consider. This is an idea that could literally and ultimately be the difference between either evolution or extinction for humanity.

One of the more important themes in this book is that of extraterrestrial life. The authors on this subject want to know if alien beings exist for three main reasons:

The authors examine not only what kind of minds could exist besides our own and how they might affect us on various levels, but how our attempts and plans to explain ourselves and our world to alien intelligences shape our perspectives and ultimately our very existence in the process. As Douglas A. Vakoch, the Director of Interstellar Message Composition at The SETI Institute, says in Chapter 12: Encoding Our Origins:

“Although the focus of SETI is on making contact with intelligence beyond Earth, the exercise of portraying ourselves in interstellar messages provides us with an opportunity to cultivate greater intelligence on our own planet.” 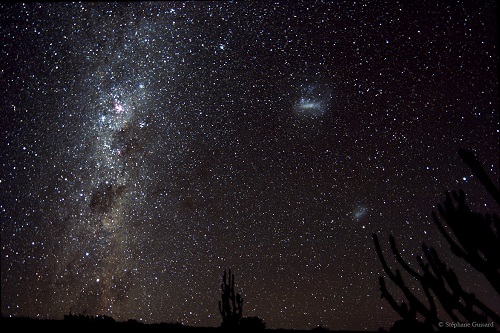 Image: Another look at southern skies, with the Milky Way and the Large and Small Magellanic Clouds framed by cacti from the Atacama desert in this superb photograph by Stéphane Guisard.

Though some chapters are easier to digest than others at a first sitting, Cosmos & Culture makes for a fascinating read. One is guaranteed to learn quite a few new facts and concepts even from a brief swim in these waters thanks to the variety of professionals who have come together to share their ideas. One also realizes how important this book is for our species to grasp the grander picture of reality, for we cannot even afford to pretend to be the focal point of existence any more if we want to avoid societal stagnation or worse. Cosmos & Culture does not claim to have all the answers, but this collection has certainly pointed the way towards some very interesting paths.