Spacetime Beyond the Planck Scale

Is the universe at the deepest level grainy? In other words, if you keep drilling down to smaller and smaller scales, do you reach a point where spacetime is, like the grains of sand on a beach, found in discrete units? It’s an interesting thought in light of recent observations by ESA’s Integral gamma-ray observatory, but before we get to Integral, I want to ponder the spacetime notion a bit further, using Brian Greene’s superb new book The Hidden Reality as my guide. Because how spacetime is put together has obvious implications for our philosophy of science.

Consider how we measure things, and the fact that we have to break phenomena into discrete units to make sense of them. Here’s Greene’s explanation:

For the laws of physics to be computable, or even limit computable, the traditional reliance on real numbers would have to be abandoned. This would apply not just to space and time, usually described using coordinates whose values can range over the real numbers, but also for all other mathematical ingredients the laws use. The strength of an electromagnetic field, for example, could not vary over real numbers, but only over a discrete set of values. Similarly for the probability that the electron is here or there.

By ‘limit computable,’ Greene refers to ‘functions for which there is a finite algorithm that evaluates them to ever greater precision.’ He goes on to invoke the work of computer scientist Jürgen Schmidhuber:

Schmidhuber has emphasized that all calculations that physicists have ever carried out have involved the manipulation of discrete symbols (written on paper, on a blackboard, or input to a computer). And so, even though this body of scientific work has always been viewed as involving the real numbers, in practice it doesn’t. Similarly for all quantities ever measured. No device has infinite accuracy and so our measurements always involve discrete numerical outputs. In that sense, all the successes of physics can be read as successes for a digital paradigm. Perhaps, then, the true laws themselves are, in fact, computable (or limit computable).

If computable mathematical functions are those that can be successfully evaluated by a computer using a finite set of discrete instructions, the question then becomes whether our universe is truly describable at the deepest levels using such functions. Can we reach an answer that is more than an extremely close approximation? If the answer is yes, then we move toward a view of physical reality where the continuum plays no role. But let Greene explain the implications:

Discreteness, the core of the computational paradigm, should prevail. Space surely seems continuous, but we’ve only probed it down to a billionth of a billionth of a meter. It’s possible that with more refined probes we will one day establish that space is fundamentally discrete; for now, the question is open. A similar limited understanding applies to intervals of time. The discoveries [discussed in Greene’s Chapter 9] which yield information capacity of one bit per Planck area in any region of space, constitute a major step in the direction of discreteness. But the issue of how far the digital paradigm can be taken remains far from settled.

And Greene goes on, in this remarkable study of parallel universes as conceived by physics today, to say that his own guess is that we will find the universe is fundamentally discrete.

All of this gets me to the Integral observatory. Because underlying what Greene is talking about is the fact that the General Theory of Relativity describes properties of gravity under the assumption that space is smooth and continuous, not discrete. Quantum theory, on the other hand, suggests that space is grainy at the smallest scales, and it’s the unification, and reconciliation, of these ideas that is wrapped up in the continuing search for a theory of ‘quantum gravity.’

New results from Integral can’t give us a final answer, but they do put limits on the size of the quantum ‘grains’ of space, showing us that they must be smaller than at least some theories of quantum gravity suggest. All of this comes courtesy of a gamma-ray burst — specifically, GRB 041219A, which took place on the 19th of December back in 2004. This was an extremely bright GRB (among the top one percent of GRB detections), and it was bright enough that Integral was able to measure the polarization of its gamma rays. The so-called ‘graininess’ of space should affect how gamma rays travel, changing their polarization (the direction in which they oscillate).

In fact, high-energy gamma rays should show marked differences in polarization from their lower-energy counterparts. Yet studying the difference in polarization between the two types of gamma rays, Philippe Laurent of CEA Saclay and his collaborators found no differences in polarization to the accuracy limits of the data. Theories have suggested that the quantum nature of space should become apparent at the Planck scale: 10-35 of a meter. But the Integral observations are 10,000 times more accurate than any previous measurements and show that if quantum graininess exists, it must occur at a level of at least 10-48 m or smaller.

“Fundamental physics is a less obvious application for the gamma-ray observatory, Integral,” notes Christoph Winkler, ESA’s Integral Project Scientist. “Nevertheless, it has allowed us to take a big step forward in investigating the nature of space itself.” 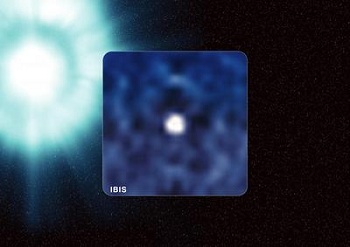 Indeed. Philippe Laurent is already talking about the significance of the result in helping us rule out some versions of string theory and some quantum loop gravity ideas. But many possibilities remain. The new findings that will come from further study will not displace earlier laws so much as extend them into new realms. In this sense past discoveries are rarely irrelevant, and it is a tribute to the coherency of physics that new perspectives so often incorporate earlier thinking. Thus Newton is not displaced by Einstein but becomes part of a more comprehensive synthesis.

Image: Integral’s IBIS instrument captured the gamma-ray burst (GRB) of 19 December 2004 that Philippe Laurent and colleagues have now analysed in detail. It was so bright that Integral could also measure its polarisation, allowing Laurent and colleagues to look for differences in the signal from different energies. The GRB shown here, on 25 November 2002, was the first captured using such a powerful gamma-ray camera as Integral’s. When they occur, GRBs shine as brightly as hundreds of galaxies each containing billions of stars. Credits: ESA/SPI Team/ECF.

Greene points out in The Hidden Reality that Isaac Newton himself never thought the laws he discovered were the only truths we would need. He saw a universe far richer than those his laws implied, and his statement on the fact is always worth quoting:

“I do not know what I may appear to the world, but to myself I seem to have only been a boy playing on the seashore, diverting myself in now and then finding a smoother pebble or prettier shell than ordinary, whilst the great ocean of truth lay before me all undiscovered.”

The impressive Integral results offer us data that may one day help in the unification of quantum theory and gravity. Thus the distant collapse of a massive star into a neutron star or a black hole during a supernova, the apparent cause of most GRBs, feeds new material to theoreticians and spurs the effort to probe even deeper. In the midst of this intellectual ferment, I strongly recommend Greene’s The Hidden Reality as a way to track recent cosmological thinking. I’ve spent weeks over this one, savoring the language, making abundant notes. Don’t miss it.