The supernova called SN 1987A is a prime object for scrutiny because it gives us the chance to see the various phases of stellar death over time. And as you might guess from the fact that it was visible to the naked eye when first detected back in 1987, it’s located relatively nearby, in the Large Magellanic Cloud. Working in the far-infrared, the European Space Agency’s Herschel space observatory has made new discoveries about SN 1987A while studying this small galaxy’s cold dust emissions.

The surprise result: SN 1987A is shrouded with enormous amounts of dust, 10,000 times more than previous estimates. The dust was at a temperature of roughly minus 256 to minus 249 degrees Celsius, making it a bit colder than Pluto (minus 240 degrees Celsius). These are the first far-infrared observations of this object, showing that the dust is emitting more than 200 times the energy of the Sun. Moreover, there is enough dust here to account for 200,000 planets the size of the Earth. Thus we learn that supernova explosions can be true dust factories.

Looking at SN 1987A with different instrumentation has proven valuable. The image below contrasts what Herschel can see versus the view from the Hubble Space Telescope. Here we’re contrasting Hubble with Herschel’s ability to see much longer wavelengths, and gaining a broad, composite picture of supernova dust formation. 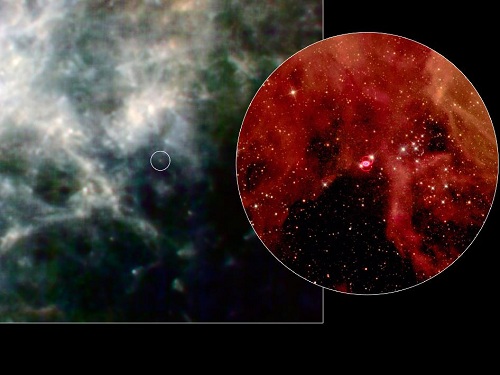 Image: This layout compares two pictures of supernova remnant SN 1987A — the left image was taken by the Herschel Space Observatory, and the right is an enlarged view of the circled region at left, taken with NASA’s Hubble Space Telescope. The tiny pink ring in the Hubble image shows where a shock wave from the blast is hitting the surrounding material expelled from the star before the explosion. The cause for the outer, faint rings is unknown. When Herschel observed SN 1987A, it saw something different. Herschel sees infrared and submillimeter light, much longer in wavelength than the visible light Hubble detects. For this reason, its picture of the supernova is not as sharp, appearing only as a fuzzy dot inside the circle. But that dot represents an important discovery of vast reservoirs of cold dust around SN 1987A. Herschel can see very cold material — the colder something is, the longer the wavelengths of light it emits. Credit: ESA/NASA-JPL/UCL/STScI.

We need to learn as much as we can about cosmic dust because the heavy atoms — carbon, silicon, oxygen, iron — that it contains were not produced in the Big Bang but later. These elements are major constituents of the rocky planets and key players in life itself. And while old red giant stars in today’s universe are thought to be major dust producers as their gases flow outward from the star, they would not have been present for this purpose in the very early universe. But dust condensing from the gaseous debris of a supernova would have become available early on, accounting for the dust seen in young galaxies observed at huge distances from Earth.

“The Earth on which we stand is made almost entirely of material created inside a star,” explained the principal investigator of the survey project, Margaret Meixner of the Space Telescope Science Institute, Baltimore, Md. “Now we have a direct measurement of how supernovae enrich space with the elements that condense into the dust that is needed for stars, planets and life.”

We also see the value of probing the universe with different wavelengths, such as Herschel’s far-infrared. While we’ve had previous studies on supernovae and their ability to produce dust (NASA’s Spitzer Space Telescope, working with shorter infrared wavelengths than Herschel, found 10,000 Earth masses of fresh dust around the supernova remnant called Cassiopea A), this detection of a much larger reservoir of dust around SN 1987A confirms and extends our knowledge. The closest supernova witnessed in almost 400 years has proven a useful object indeed.

The paper is Matsuura et al., “Herschel detects a massive dust reservoir in supernova 1987A,” published in Science Express on 7 July 2011 (abstract). More in this JPL news release.