A Binary System on the Edge of Merger

A pair of white dwarf stars too close together to distinguish visually may help us in the hunt for gravitational waves, while potentially explaining a whole class of rare, relatively faint supernovae. The system in question — called SDSS J065133.33+284423.3, or J0651 for short — was found during a spectroscopic survey looking for extremely low mass white dwarfs. J0651 includes one white dwarf with about a quarter of the Sun’s mass compacted down to Neptune-size, along with a companion white dwarf that is half the Sun’s mass and about the size of the Earth. 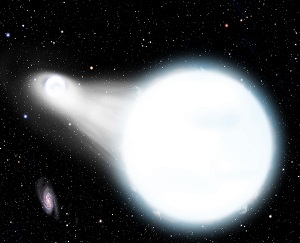 Usefully, this is a system oriented so that we can observe eclipses of each star by the other, which is how we can measure orbital parameters, masses and white dwarf radii. The General Theory of Relativity predicts that close pairs of stars produce gravitational waves that are ripples in the curvature of spacetime, and as the paper on the new work points out, the binary pulsar PSR B1913+16 has already given us indirect evidence for such waves through the gradual decay of the orbit as predicted by Einstein’s theory. J0651 now emerges as an opportunity to study gravitational waves again by measuring small changes in the stars’ orbital periods.

Image: Two white dwarfs have been discovered on the brink of a merger. In just 900,000 years, material will start to stream from one star to the other (as shown in this artist’s conception), beginning the process that may end with a spectacular supernova explosion. Watching these stars fall in will allow astronomers to test Einstein’s general theory of relativity as well as the origin of a special class of supernovae. Credit: David A. Aguilar (CfA)

Thus we have an unusually useful celestial laboratory. Because there seems to be no exchange of mass, the change in separation over time should be easy to measure. From the paper:

We…predict that J0651’s orbital period is shrinking by 2.7 × 10-4 sec per year due to gravitational wave radiation. The expected change in period adds up to a 5.5 sec change in time-of-eclipse in one year. When we measure this change we expect to provide yet another fundamental test of general relativity and the existence of gravitational waves.

It’s a test that could potentially be confirmed by the proposed ESA/NASA Laser Interferometer Space Antenna (LISA) mission, which the authors predict could detect this gravitational wave source within its first week of operation considering its peak sensitivity at frequencies corresponding to orbital periods like those found here. The white dwarfs complete an orbit in just 13 minutes and will merge quickly in astronomical time. On that issue the paper comments:

The absence of mass transfer in J0651 is perhaps surprising given how quickly it will merge. In all known binaries with periods comparable to J0651… one star fills its Roche lobe and transfers mass to its companion. Our data show that the J0651 primary has a Roche lobe radius 1.5 times its current radius. Under the assumption of energy and angular momentum loss due to gravitational wave radiation, the primary WD will reach its Roche lobe radius at an orbital period of 6.5 minutes in 0.9 Myr.

What happens when the stars merge 900,000 years from now is another issue. In some models, merging white dwarf pairs are the source of faint stellar explosions called underluminous supernovae. Such objects are 10 to 100 times less luminous than normal Type Ia supernovae. The supernova SN 2005E, for example, can be explained using parameters similar to the J0651 system, but mass transfer between the two stars could lead to a variety of different outcomes. Thus the need for the ongoing survey of low mass white dwarf systems using the MMT telescope at the Whipple Observatory on Mt. Hopkins, Arizona, from which the current paper draws its data.

The two white dwarfs are circling at a speed of some 600 kilometers per second. “If there were aliens living on a planet around this star system, they would see one of their two suns disappear every 6 minutes – a fantastic light show.” said Smithsonian astronomer and co-author Mukremin Kilic. So strong is the mutual gravitational pull of the white dwarfs here that the lower-mass star is deformed by three percent and, as this Harvard-Smithsonian Center for Astrophysics news release notes, a similar bulge on our own planet would result in tides 190 kilometers high.