Two brown dwarfs relatively near to the Sun may be just the first such objects we’ll soon identify with data from the WISE (Wide-field Infrared Survey Explorer) satellite. Ralf-Dieter Scholz (Leibniz-Institut für Astrophysik, Potsdam) and colleagues have gone to work on a search for brown dwarfs with high proper motion, looking for brown dwarfs in the immediate solar neighborhood using not just the preliminary WISE data release but the previous near-infrared (2MASS) and deep optical (SDSS) surveys. The search has already begun to pay off.

The two brown dwarf discoveries — WISE J0254+0223 and WISE J1741+2553 — are at estimated distances of 15 and 18 light years respectively. Their strong infrared signature and their extremely faint appearance at visible wavelengths attracted the team’s attention, and both show the high proper motion across the sky that flags nearby stellar objects. The team was able to use the Large Binocular Telescope (LBT) in Arizona to determine spectral type and distance more accurately. Interestingly, both objects fit into the category of T-type brown dwarfs, at the boundary of the still not well defined class of Y-type brown dwarfs. 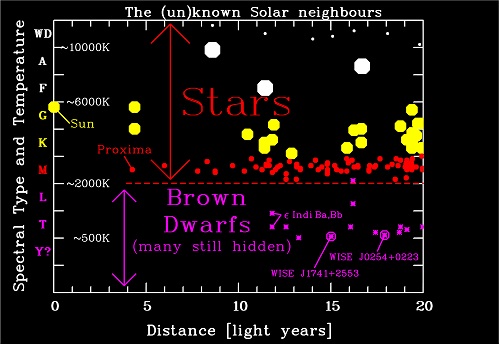 Image: The (un)known Solar neighbors. The stars are shown with symbols of different sizes and colours, roughly corresponding to their real sizes and spectral types. Most stars in the Solar neighborhood are red dwarf stars of spectral type M (in the middle of the figure) with surface temperatures of slightly more than 2000 Kelvin. Proxima, our nearest known neighbor, also belongs to this class. The number of brown dwarf discoveries (almost all with spectral types L and T, and surface temperatures below 2000 K) is already higher than the number of white dwarfs (shown as small white dots at the top). The two nearest brown dwarfs, epsilon Indi Ba and Bb, the discovery of which was reported by the AIP in 2003 and 2004, and the newly found objects are marked. (Credit: AIP).

Do brown dwarfs, hitherto undetected, surround us in large numbers? We certainly can’t rule out the possibility, and we can expect much more data mining from the riches WISE has accumulated. And yes, the case for a brown dwarf closer than the Alpha Centauri stars is still open, making the brown dwarf hunt of unusual interest for identifying potential targets for future probes. But the two brown dwarfs in question could prove useful in many ways in their own right, as the paper on this work notes:

While WISE J0254+0223 and WISE J1741+2553 are likely similar to the few other T8-T10 brown dwarfs known, they are the first ultracool brown dwarfs detected in both 2MASS and SDSS. With their relatively bright magnitudes they are excellent targets for detailed spectroscopic investigations and for high resolution imaging in search of possible binarity. They may become important laboratory sources at the boundary between the T-type and the suggested Y-type (Kirkpatrick et al. 1999) classes of brown dwarfs.

Image: False-colour images of the two brown dwarf discoveries WISE J0254+0223 and WISE J1741+2553 (composite of three images taken by the Wide-field Infrared Survey Explorer (WISE) with different filters in the infrared). In the WISE colours, the extremely cool brown dwarfs appear as yellow-green objects. The positions of the objects as observed by a previous near-infrared sky survey about ten years before the WISE observations are also marked. Every image covers a sky field about 200 times smaller than the full moon. After 700 and 1200 years, respectively, the proper motions of the two objects lead to a shift in their position as large as the full moon diameter. (Credit: AIP, NASA/IPAC Infrared Science Archive).

Previous post: A Binary System on the Edge of Merger