Water in the Distant Universe

Although I wasn’t able to do any traveling during my recent week off, I did manage to get in some backed up reading, including Iain Banks’ Use of Weapons (2008), the third in his series of novels about the interstellar civilization known as ‘The Culture.’ I’ve developed quite an interest in Banks, whose novels paint a future so finely textured that the memory of it lingers like a flashback to an actual experience, an intuitive, almost mystical sense that I remember having encountered when I first read Cordwainer Smith (Paul Linebarger) many years ago (some of Jay Lake’s short stories also have this effect on me). Thanks to the many Centauri Dreams readers who put me on to Banks’ novels.

Among the events in astrophysics that occurred during my absence, I was most struck by the discovery of vast amounts of water surrounding a black hole more than 12 billion light years away, an indication, in the words of JPL’s Matt Bradford, that “water is pervasive throughout the universe, even at the very earliest times.” This one triggers a more traditional science fictional sense of wonder in a major way, if for no other reason than the sheer scale of the objects involved. The quasar APM 08279+5255 harbors a black hole 20 billion times more massive than the Sun and, according to this NASA news release, produces an amount of energy equal to a thousand trillion suns. That’s 65,000 times the energy output of the entire Milky Way galaxy. 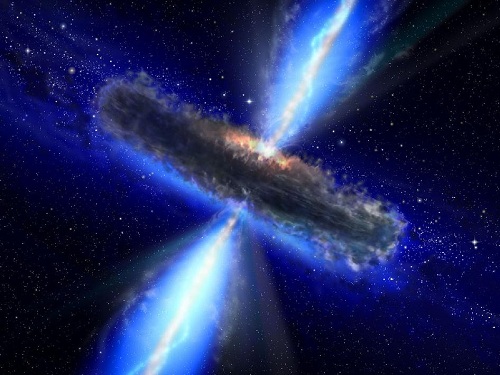 Image: This artist’s concept illustrates a quasar, or feeding black hole, similar to APM 08279+5255, where astronomers discovered huge amounts of water vapor. Gas and dust likely form a torus around the central black hole, with clouds of charged gas above and below. X-rays emerge from the very central region, while thermal infrared radiation is emitted by dust throughout most of the torus. While this figure shows the quasar’s torus approximately edge-on, the torus around APM 08279+5255 is likely positioned face-on from our point of view. Credit: NASA/ESA.

The huge black hole, pulling in surrounding gas and dust and spewing out energy, is what powers up the quasar, an object of a class known to contain the most luminous and most energetic objects in the universe. And what the paper on this work tells us is that the cloud of water vapor associated with this object contains the equivalent of 140 trillion times all the water in the world’s oceans. Studying such phenomena tell us much about the early universe, according to co-author Alberto Bolatto:

The water vapor is found in a gaseous region that spans hundreds of light years, a cloud whose temperature is minus 53 degrees Celsius, unusually warm in astronomical terms. In fact, the cloud is five times hotter and between 10 and 100 times denser than gases typical to galaxies like the Milky Way. There seems to be enough water vapor — and other molecules, including carbon monoxide — to feed the black hole until it grows to six times its current size, though at this point no one can say how much of the gas will actually wind up being absorbed by it.

While water vapor is present in the Milky Way, it appears in amounts 4000 times less massive than what we find in the quasar, in part because most of the water in our galaxy is frozen into ice. The discovery is owed to work done with the Z-Spec spectrograph at the Caltech Submillimeter Observatory on Mauna Kea, operating in the millimeter wavelengths. And it’s an indication of more to come at these wavelengths, according to Jason Glenn (University of Colorado at Boulder), who is a co-principal investigator on the Z-Spec:

“Breakthroughs are coming fast in millimeter and submillimeter technology, enabling us to study ancient galaxies caught in the act of forming stars and supermassive black holes. The excellent sensitivity of Z-Spec and similar technology will allow astronomers to continue to make important and surprising findings related to distant celestial objects in the early universe, with implications for how our own Milky Way galaxy formed.”

Astronomers including the authors of this study are working on the design for CCAT, a 25-meter telescope destined for Chile’s Atacama desert, which will push yet deeper into the universe at millimeter and submillimeter wavelengths. We can expect CCAT to continue the study of gas content and water vapor in some of the earliest galaxies in the universe. The current paper is Bradford et al., “The Water Vapor Spectrum of APM 08279+5255: X-Ray Heating and Infrared Pumping over Hundreds of Parsecs,” accepted by Astrophysical Journal Letters (preprint).