One of the more intriguing issues for the Wide-field Infrared Survey Explorer (WISE) satellite is the question of nearby objects that might be causing problems with the Oort Cloud. Specifically, we’re interested in learning whether an object like the hypothesized ‘Nemesis’ — a tiny companion star to the Sun — or a closer gas giant (‘Tyche’) — might cause disruption to cometary orbits that would create episodes in which more comets than usual make their way into the inner Solar System. Find such an object and you may be able to explain what some have been arguing, that there are periodic variations in the timing of giant impacts, a regular and revealing pattern. 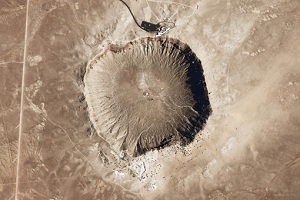 Of course, periodic changes in the frequency of impacts could be caused by something other than a companion star or unknown planet. Another suggested mechanism is the motion of our Solar System through the main plane of the Milky Way, causing the gravitational influence of nearby stars to tug on Oort Cloud comets on a repeated basis. In both cases, we’re wondering whether the age estimates for various craters shows us a pattern, something that tells of impact cycles varying between 13 and 50 million years depending on which theory you look at. Earth would have long periods with few impacts and then a wave of increased impact activity.

Image: Barringer Crater, also known as Meteor Crater, in Arizona. This crater was formed around 50,000 years ago by the impact of a nickel-iron meteorite. Near the top of the image, the visitors center, complete with tour buses on the parking lot, provides a sense of scale. Credit: National Map Seamless Viewer/US Geological Service.

Enter Coryn Bailer-Jones (Max-Planck-Institut für Astronomie), whose new work in Monthly Notices of the Royal Astronomical Society argues that perceived periodic patterns in impact activity are nothing more than a statistical artifact. In other words, the idea that there is an ebb and flow to cometary strikes is not actually found in the data. This does not mean the situation is static. Bailer-Jones says there may be a slight increase in impact events over the past 250 million years under this scenario, but a long-term pattern of periodic variability does not appear in his analysis.

He goes on to argue that the evidence for disruptions of the Oort Cloud relies on a problem with traditional statistical reasoning, saying “There is a tendency for people to find patterns in nature that do not exist. Unfortunately, in certain situations traditional statistics plays to that particular weakness.” The problem, explored in this MPIA news release, is that those studying periodicities in impact crater data have to take into account whether the periodicity they are testing against was derived from their data in the first place or posited independent of observation. If the latter, the argument can be flawed because a bias has been introduced from the outset. That bias operates against the ‘null hypothesis’ against which the periodicities would be measured.

The alternative chosen by Bailer-Jones is to work on the problem through Bayesian statistics, an approach that begins with multiple hypotheses and uses the data to adjust the probabilities for each. I am no statistician, and my hope is that some of the more mathematically inclined of our readers will have a go at the paper to tell me how sound Bailer-Jones’ conclusions are. In any case, the point is that in all the data sets, periodic variation in cratering is disfavored, and the author argues that the craters we see on Earth do not suggest regular waves of impact events:

“From the crater record there is no evidence for Nemesis. What remains is the intriguing question of whether or not impacts have become ever more frequent over the past 250 million years.”

The latter issue is interesting because such an increase in impact rates would, in Bailer-Jones view, make the usual null hypothesis assuming constant impact probability invalid, thus calling into question any study that finds a periodic change in impact events. So instead of periodic variations in impacts, we’re looking at a trend within the past 250 million years of a steady increase in such events. This may in turn be explained by the fact that smaller craters erode more easily, and older craters have more time to erode away. In other words, larger and younger craters are easier to find than smaller, older ones. The question of whether the increase in impact activity is real, then, may have to be resolved by looking at impact craters on the Moon, where there are no natural processes at work that can lead to craters being filled and eroded. 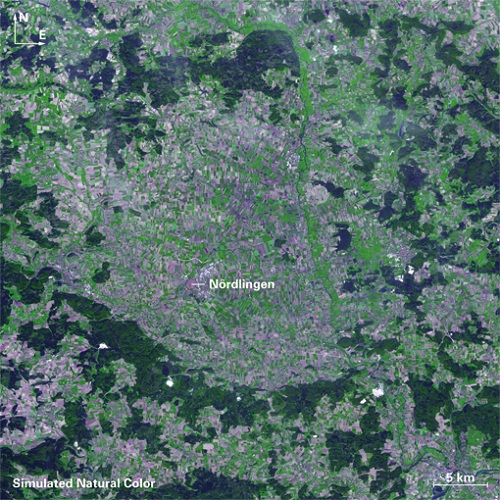 Image: The Nördlinger Ries, or Ries, was formed when a meteor hit the area 15 million years ago. The resulting crater, roughly 20 km in diameter, has since been filled in and eroded. In this natural-colour satellite image, it can just be made out as a circular structure, much less clearly defined than the Barringer Crater, which is significantly younger. Credit: NASA/J. Allen using data provided courtesy of NASA/GSFC/METI/ERSDAC/JAROS, and U.S./Japan ASTER Science Team.

WISE data should eventually give us the definitive word on large objects in nearby space. Until then, Bailer-Jones’ work is, “Bayesian time series analysis of terrestrial impact cratering,” Monthly Notices of the Royal Astronomical Society, published early online 27 June, 2011 (abstract).