Antimatter Source Near the Earth

Now that NASA’s Institute for Advanced Concepts (NIAC) is back in business, I’m reminded that it was through NIAC studies that both Gerald Jackson and James Bickford introduced the possibility of harvesting antimatter rather than producing it in huge particle accelerators. The idea resonates at a time when the worldwide output of antimatter is measured in nanograms per year, and the overall cost pegged at something like $100 trillion per gram. Find natural antimatter sources in space and you can think about collecting the ten micrograms that might power a 100-ton payload for a one-year round trip mission to Jupiter. Contrast that with Juno’s pace!

That assumes, of course, that we can gather enough antimatter to test the concept and develop propulsion systems — doubtless hybrids at first — that begin to draw on antimatter’s power. Bickford (Draper Laboratory, Cambridge MA) became interested in near-Earth antimatter when he realized that the bombardment of the upper atmosphere of the Earth by high-energy galactic cosmic rays should result in ‘pair production,’ creating an elementary particle and its antiparticle.

A planetary magnetic field can hold such particles in place, producing a localized source of antiprotons. The detection of antimatter in this configuration has now been confirmed by a team of researchers using data from the Pamela satellite (Payload for Antimatter Matter Exploration and Light-nuclei Astrophysics). In fact, Pamela picks up thousands of times more antiprotons in a region called the South Atlantic Anomaly than would be expected from normal particle decays. 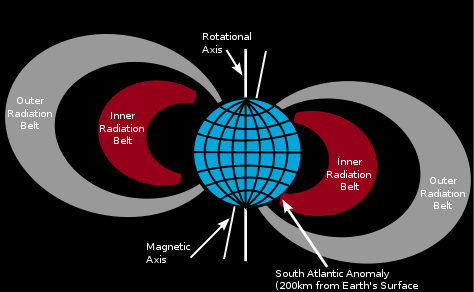 We could go so far as to talk about an ‘antimatter belt’ around the Earth, as the paper on this work explains:

Antiprotons are… created in pair production processes in reactions of energetic CRs [cosmic rays] with Earth’s exosphere. Some of the antiparticles produced in the innermost region of the magnetosphere are captured by the geomagnetic field allowing the formation of an antiproton radiation belt around the Earth. The particles accumulate until they are removed due to annihilation or ionization losses. The trapped particles are characterized by a narrow pitch angle distribution centered around 90 deg and drift along geomagnetic field lines belonging to the same McIlwain L-shell where they were produced. Due to magnetospheric transport processes, the antiproton population is expected to be distributed over a wide range of radial distances.

The McIlwain L-shell referred to above describes the magnetic field lines under investigation. As to the South Atlantic Anomaly, it is here that the inner Van Allen radiation belt approaches the Earth’s surface most closely, which creates a higher degree of flux of energetic particles in the region. It turns out to be quite a lively place, as this Wikipedia article on the matter makes clear:

The South Atlantic Anomaly is of great significance to astronomical satellites and other spacecraft that orbit the Earth at several hundred kilometers altitude; these orbits take satellites through the anomaly periodically, exposing them to several minutes of strong radiation, caused by the trapped protons in the inner Van Allen belt, each time. The International Space Station, orbiting with an inclination of 51.6°, requires extra shielding to deal with this problem. The Hubble Space Telescope does not take observations while passing through the SAA. Astronauts are also affected by this region which is said to be the cause of peculiar ‘shooting stars’ (phosphenes) seen in the visual field of astronauts. Passing through the South Atlantic Anomaly is thought to be the reason for the early failures of the Globalstar network’s satellites.

What we’re seeing in the new work is that the Van Allen belt is indeed confining antiparticles in ways that the earlier NIAC work suggested. The antiprotons eventually encounter normal matter in the Earth’s atmosphere and are annihilated, but new antiparticles continue to be produced. The question is whether there may be enough antimatter here for hybrid missions like Steven Howe’s antimatter sail, which uses tiny amounts of antimatter to induce fission in a uranium-infused sail. James Bickford, in his Phase II study at NIAC, talked about a collection scheme that could collect 25 nanograms per day, using a plasma magnet to create a magnetic scoop that could be deployed in an equatorial Earth orbit, one that would trap incoming antiprotons.

Antimatter trapped in Earth’s inner radiation belt offers us useful savings, if Bickford is right in thinking that space harvesting will prove five orders of magnitude more cost effective than antimatter creation here on Earth. I also noticed an interesting comment in his Phase II NIAC report: “Future enhanced systems would be able to collect from the GCR [galactic cosmic ray] flux en route to further supplement the fuel supply.” Obviously, exploiting antimatter trapped near the Earth and other Solar System worlds assumes a robust space-based infrastructure, but it may be one that will finally be able to bring antimatter propulsion into a new era of experimentation.

James Bickford’s Phase II report is titled “Extraction of Antiparticles Concentrated in Planetary Magnetic Fields” (online at the NIAC site). Back in 2007 I looked at this work in three connected posts, which may be useful in putting all this in context:

Next post: New Evidence for Life’s Precursors in Space