Is there a ‘goldilocks’ class of meteorite, one in which we can say that conditions were just right for producing the stuff of life? That’s one of the conclusions scientists at NASA’s Goddard Space Flight Center are reaching by studying samples taken from twelve carbon-rich meteorites, nine of them recovered from Antarctica. Their evidence shows that some of the building blocks of DNA, which carries the genetic blueprint for life, were most likely created in space before falling to Earth through meteorite and comet impacts. Thus we move closer to answering a key question:

“People have been discovering components of DNA in meteorites since the 1960’s, but researchers were unsure whether they were really created in space or if instead they came from contamination by terrestrial life,” said Dr. Michael Callahan of NASA’s Goddard Space Flight Center, Greenbelt, Md. “For the first time, we have three lines of evidence that together give us confidence these DNA building blocks actually were created in space.”

Grinding up samples of the meteorites, the Goddard team went to work with a liquid chromatograph and a mass spectrometer to separate and study the chemical structure of the compounds inside. What they found were adenine and guanine, nucleobases that connect with two other nucelobases to form the rungs of the DNA ladder. Nucleobases are essential to life. Appearing with them were hypoxanthine and xanthine, which are not found in DNA but do appear in other biological processes. 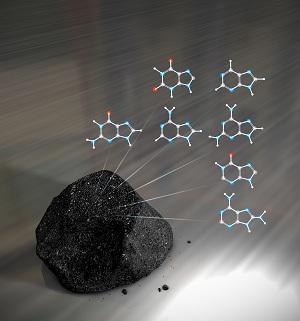 So far so good, but the question of separating these materials from possible terrestrial contamination remains. The next part of the story is thus significant. In two of the meteorites, traces of three molecules structurally similar to nucleobases showed up: purine, 2,6-diaminopurine, and 6,8-diaminopurine. This news release from GSFC points out that the latter two are almost never used in biology. Callahan says these ‘nucleobase analogs’ point to an origin in space:

“You would not expect to see these nucleobase analogs if contamination from terrestrial life was the source, because they’re not used in biology, aside from one report of 2,6-diaminopurine occurring in a virus (cyanophage S-2L). However, if asteroids are behaving like chemical ‘factories’ cranking out prebiotic material, you would expect them to produce many variants of nucleobases, not just the biological ones, due to the wide variety of ingredients and conditions in each asteroid.”

A final and compelling bit of evidence is that the GSFC team was able to produce both the biological and non-biological nucleobases in a non-biological reaction using hydrogen cyanide, ammonia and water. “This provides a plausible mechanism for their synthesis in the asteroid parent bodies, and supports the notion that they are extraterrestrial,” adds Callahan, who points to the type of meteorites known as CM2 as the ‘goldilocks’ class of meteorite, optimized to make more of these molecules. Thus the notion that the building blocks of life arrived on our planet through impacts is given a boost, one that strongly points to their non-terrestrial origin.

After all, hydrogen cyanide is common in the interstellar medium, and thus likely to produce chemical reactions on space debris. Amino acids have turned up in samples of comet Wild 2 and in various carbon-rich meteorites. The new work tells us that nucelobases, the building blocks of genetic material like DNA and RNA, can have an extraterrestrial origin in meteorites rather than being the result of contamination. The idea that the early Earth could have been seeded with these important molecules seems less speculative all the time. Says Jim Cleaves (Carnegie Institution for Science), who worked on the meteorite samples: “This shows us that meteorites may have been molecular tool kits, which provided the essential building blocks for life on Earth.”