In the Sky with Diamonds

The idea of a planet around a pulsar is so bizarre that we often forget that three planets around the pulsar PSR B1257+12 were the first exoplanets ever detected. This pulsar is the remnant of a once massive star in the constellation Virgo that became a supernova, and the planets there — detected by Alex Wolszczan (Penn State) — were the first new planets discovered since the era when Clyde Tombaugh was putting the blink comparator through its paces at Lowell Observatory, an effort that led to the discovery of Pluto in 1930. And these are tiny worlds at that. A newly found fourth planet in the B1257+12 system is thought to be no more than one-fifth the mass of Pluto itself. We can find worlds like this because the beam of electromagnetic radiation pulsars emit is extraordinarily regular, making planetary signatures apparent.

Now another pulsar — PSR J1719-1438, some 4,000 light years away in the constellation Serpens (the Snake) — is in the news because of the discovery that its own pulses are being affected by the gravitational pull of a small planet. What we are learning about the new planet is highly interesting. It is slightly more massive than Jupiter, and orbits the pulsar at a distance of about 600,000 kilometers, racing around its primary in a scant two hours and ten minutes. The pulsar rotates more than 10,000 times per minute and has a mass about 1.4 times that of our Sun, but is only 20 kilometers in radius. At 600,000 kilometers out, a planet larger than 60,000 kilometers (five times Earth’s diameter) would be pulled apart by the pulsar’s gravity. 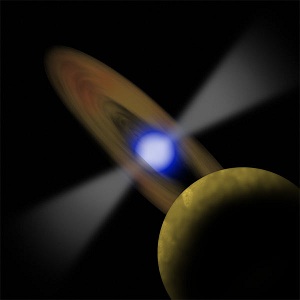 This must be, then, a small planet with a great deal of mass, which is why this story stands out. For what Matthew Bailes (Swinburne University of Technology, Melbourne) and colleagues are reporting is a planet that may itself be the remains of a massive star. The pulsar and its companion are close enough that the planet must in fact be what’s left of a white dwarf that has lost over 99.9 percent of its original mass. And that leaves us with an interesting relic, a remnant of carbon and oxygen at such high density that the star may be made largely of diamond.

The paper on this work states the matter clearly:

PSR J1719−1438 demonstrates that special circumstances can conspire during binary pulsar evolution that allows neutron star stellar companions to be transformed into exotic planets unlike those likely to be found anywhere else in the Universe. The chemical composition, pressure and dimensions of the companion make it certain to be crystallized (ie diamond).

Image: Artistic reproduction of an extrasolar planet around a pulsar. Copyright : Paris Observatory/UF.

Most of the mass of the so-called ‘diamond planet’ would have been drawn toward the pulsar. Interestingly enough, very fast-spinning pulsars like this one — astronomers call them millisecond pulsars — normally have companions of some kind. In fact, as many as 70 percent of them do. According to this CSIRO news release, some astronomers believe that such companions, when burning as a star, would be responsible for transferring matter to the pulsar and spinning it up to its high speed. The result over time: A millisecond pulsar keeping company with a white dwarf.

This configuration of pulsar and white dwarf makes sense, but finding former white dwarfs that have survived destruction only to become crystalline planets is not likely to be common:

“The ultimate fate of the binary is determined by the mass and orbital period of the donor star at the time of mass transfer. The rarity of millisecond pulsars with planet-mass companions means that producing such exotic planets is the exception rather than the rule, and requires special circumstances,” said Dr. Benjamin Stappers (University of Manchester).

We should learn a great deal more about pulsars from the project this work grew out of, a search for pulsars that is the largest and most sensitive of its type ever attempted. It will doubtless identify more pulsar planets, and probably more intriguing circumstellar disks of the kind already found around the pulsar 4U 0142+61. Planets, as we’re realizing more and more, seem to find myriad ways to form even after events as massive as a supernova. The paper is Bailes et al., “Transformation of a Star into a Planet in a Millisecond Pulsar Binary,” published online in Science Express August 25 2011 (abstract).