SETI and the Use of Tools

It makes perfect sense to me that we usually think of extraterrestrial intelligence in terms of technology. After all, when we listen to the stars for the whisper of a distant signal, we’re saying that SETI is all about finding something that was produced with tools, like a beacon. Or if we extend the thought to science fiction, we might dream of studying alien civilizations through their ruins on long-dead worlds, learning about them by studying what they once built.

After all, this is how we do archaeology, digging up spear-points or the bricks of ziggurats, the things that a culture leaves behind that it built with its tools. But will we always confine the idea of intelligence to the presence of an artifact? Science writer and Astronomy Now editor Keith Cooper examines the question in Dolphins, Aliens, and the Search for Intelligent Life, an incisive new essay for Astrobiology Today, one that offers us a new technology that may prove that intelligence doesn’t necessarily need tools.

CHAT — Cetacean Hearing and Telemetry — is a device built to help humans communicate with dolphins. So far we’ve been able to determine that dolphins do some extremely interesting things from the standpoint of possible language. They can emit whistles and barks, use echo location, and seem to understand a basic syntax, which might flag, for example, the difference between a statement and a question, or differentiate between a past or future tense.

The Nature of a Signal

Some researchers call this a language (whales have many of the same traits), while others call it ‘referential signaling,’ as Cooper explains. Such signaling would involve tagging things with names, but whether or not it indicates a deeply interactive language is another issue entirely. Maybe CHAT can help make the call. It’s a device worn around a diver’s neck, connected to a pair of hydrophones and a simple keyboard that can be used with one hand. The idea is to sidestep the issue of whether dolphin ‘language’ can be translated by setting up the option of a common artificial language that both humans and dolphins could use. 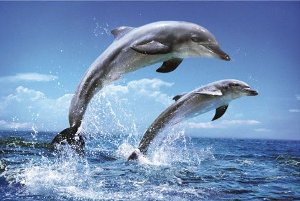 The device is to be tested this year and put into field use in 2012, so we may start to get some results fairly soon. While we await early findings, Cooper talks about Robin Dunbar’s ideas on the social nature of intelligence. Dunbar (University of Oxford) looked at intelligence evolving out of social practice, seeing it as a way for animals not only to survive but prosper in complex social groupings. Let me quote Cooper on this:

These include notions of reciprocal altruism (I scratch your back, you scratch mine), politics (forming sub-groups and coalitions within the larger group) and understanding the emotions of others (empathy, which in turn relies on theory of mind, the ability to be aware of one’s self and others). Looking at it that way, modern social networking on media such as Facebook may just be a symptom of what helped drive us to become intelligent in the first place, many tens of thousands of years ago.

And this takes us back to questions about things like SETI, because we are, after all, talking about how individuals make sense to each other:

Which circles us back to dolphins, of course, but leave me wondering just what to make of this in a cosmic sense. I grew up being enthusiastic about SETI ever since, as a teenager, I read about Frank Drake’s work at Green Bank, which began in 1960. The idea of researchers scanning the skies for signals seemed so intuitively right that in my naïveté, I assumed we’d track down a confirmed beacon within just a few years.

No such luck, and in the many years since we’ve looked not only at how mind-bogglingly difficult the SETI hunt is at radio frequencies, but how restricting it is to think that an advanced civilization would use radio in its communications in the first place. Now we have to confront the possibility that extraterrestrial intelligence may not be rare at all, but that it may not necessarily lead to tool-building and hence beacons.

Cooper’s essay is just terrific, especially insofar as it gets into Claude Shannon’s 1940s work on the nature of signals, which is so crucial to how we understand data and language (or maybe I should say ‘language as data’). I’ll leave the pleasure of reading Keith’s presentation of Shannon to you because you’ll want to read the whole essay. But it’s worth noting in the SETI context that putting dolphin whistles through Shannon’s information theory demonstrates an internal structure in dolphin communications, while Shannon’s ideas on entropy and language — which focus on language as order and probability — show promising possibilities for dolphin intelligence, although everyone notes the need for more data.

Let’s say, then, that if intelligence is as much about communication as technology, then social behavior may well be the driver on many worlds, where intelligent beings may contemplate the universe without ever developing slide rules or computers or radio transmitters. Perhaps SETI is best considered as SETT — the Search for Extraterrestrial Technology — while intelligent cultures flourish undetected.

Learning more about how species on our own planet use their intelligence, and discovering what sort of linguistic capabilities they actually have, will eventually help us sort out the possibilities. Not everyone agrees that dolphins possess the kind of intellect that could summon up a true language. What a conundrum — we’re not sure whether or not we’re the only ‘intelligent’ species on our own planet. How little we know about intelligence elsewhere in the cosmos!