A New Mechanism for Supernovae

Are dozens of Type Ia supernovae waiting to happen within a few thousand light years of the Earth? New research from the Harvard-Smithsonian Center for Astrophysics suggests the answer is yes. Type Ia events are thought to occur when a white dwarf accretes material from a companion star. The idea is that the white dwarf — a stellar remnant that is no longer capable of fusion — eventually exceeds the so-called Chandrasekhar mass, roughly 1.4 times the mass of the Sun. When a star pushes past the limit, gravity compacts the dwarf to the point of runaway nuclear fusion, and a spectacular stellar event appears in the heavens. 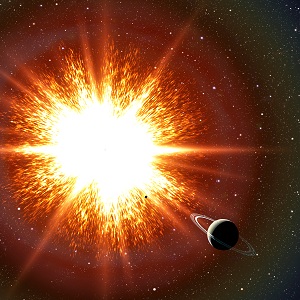 Type Ia supernovae are a well studied phenomenon, but a continuing problem with these events is that the scenario doesn’t quite explain everything we see, or don’t see. Most Type Ia supernovae show none of the hydrogen and helium near the explosion that we would expect. As this news release from the CfA notes, the gas should be there, in the form of remnant materials that had not yet been accreted by the white dwarf at the time of the explosion, or possibly left behind by the disruption of the companion star during it. Where is the missing gas?

Image: New research shows that some old stars known as white dwarfs might be held up by their rapid spins, and when they slow down, they explode as Type Ia supernovae. Thousands of these “time bombs” could be scattered throughout our Galaxy. In this artist’s conception, a supernova explosion is about to obliterate an orbiting Saturn-like planet. Credit: David A. Aguilar (CfA).

Rosanne Di Stefano and colleagues are now examining a new mechanism for such supernovae, one in which the spin of the white dwarf would explain the lack of hydrogen and helium. The work notes that a white dwarf gains angular momentum as it gains mass. Get it rotating fast enough and the additional spin can help to support it, so that it crosses the barrier of 1.4 solar masses and becomes a super-Chandrasekhar-mass star.

Eventually accretion will stop and the white dwarf will begin to slow down. When the spin is no longer sufficient to counteract the effects of gravity, the Type Ia supernova occurs. It’s an ingenious solution, and because the spin-down process could create an interval of as much as a billion years between the 1.4 solar mass point and the ensuing explosion, it would explain the dissipation of materials, and allow time for the companion star to evolve into a second white dwarf.

Conservation of angular momentum plays an important role in astrophysics. It allows NSs and black holes to be spun up to near maximal rotation. It seems almost certain that WDs can be similarly spun up. Indeed, given the variety of donors and accretion geometries exhibited in nature, spin-up can fail only if there is a fundamental physical principle that disallows it. As long as spin-up to near-maximal rotation occurs, some of the effects we discussed will occur. Although theoretical uncertainties make predictions difficult, we have shown that spin-up/spin-down has testable consequences. The measurements we propose can therefore provide input for theoretical work.

Take the estimate of three Type Ia supernovae every thousand years in our galaxy and the calculations of Di Stefano’s team are that there are probably dozens of such pre-explosion systems within several thousand light years of the Sun. “We don’t know of any super-Chandrasekhar-mass white dwarfs in the Milky Way yet, but we’re looking forward to hunting them out,” says Di Stefano’s colleague and co-author Rasmus Voss (Radboud University, Nijmegen, The Netherlands). Wide-field surveys like Pan-STARRS and the Large Synoptic Survey Telescope should help us detect supernova precursors like these for study in depth.

Next post: If You’re Going to the Starship Conference…