With a fierce interest in nearby brown dwarfs, I often neglect the significant part of the WISE mission devoted to asteroids. WISE (Wide-Field Infrared Explorer) has catalogued more than 157,000 asteroids in the main belt and discovered 33,000 new objects as part of its NEOWISE activities. Here the benefits of infrared wavelengths become apparent, for we know little about the reflectivity of a given asteroid and thus have trouble figuring out how large it is. Using infrared, WISE can relate light in these frequency ranges to the size and temperature of the object. Having established size, mission scientists can re-calculate the asteroid’s reflectivity.

NEOWISE is actually an enhancement to the WISE data processing system that makes for better detection of moving objects in the WISE data. In addition to the asteroids mentioned above, NEOWISE has also detected more than 500 Near-Earth Objects (NEOs) and roughly 120 comets. We’ve had plentiful studies at visible wavelengths from groups like the Catalina Sky Survey, Spacewatch and the Near Earth Asteroid Tracking Program, and we’ve also examined some objects with radar, although that requires the objects to pass fairly close to the Earth. Thus we have uncovered plenty of objects, including some 7600 NEOs and hundreds of thousands of main belt asteroids, but have been able to physically characterize only a small number of them.

NEOWISE begins to bridge this gap, and along the way is uncovering information about the so-called ‘dinosaur killer’ asteroid, once thought to be associated with the object known as (298) Baptistina. It was back in 2007 that Baptistina was suggested as the source of the object that struck the Earth in the Cretaceous/Tertiary extinction event 65.5 million years ago, contributing to the demise of the dinosaurs. The theory: Baptistina’s parent body, perhaps 170 kilometers in diameter, collided with another 60-kilometer wide asteroid about 160 million years ago, sending a chunk into an Earth-crossing trajectory. Moreover, Baptistina has the characteristics of a carbonaceous chondrite, matching the impactor at Chicxulub crater in the Yucatan. 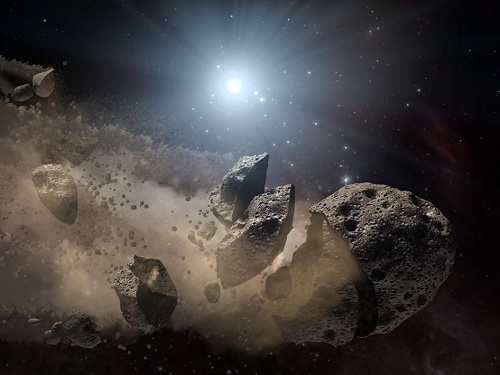 Image: Scientists think that a giant asteroid, which broke up long ago in the main asteroid belt between Mars and Jupiter, eventually made its way to Earth and led to the extinction of the dinosaurs. Data from NASA’s WISE mission likely rules out the leading suspect, a member of a family of asteroids called Baptistina, so the search for the origins of the dinosaur-killing asteroid goes on. This artist’s concept shows a broken-up asteroid. Credit: NASA/JPL-Caltech.

Call it the ‘Baptistina bombardment,’ a prolonged surge in impact activity that affected both the Earth and the Moon — researchers in 2007 pointed to the prominent crater Tycho as another possible sign of these events. But WISE has now demonstrated, through study of 1,056 members of the Baptistina family, that the parent asteroid broke up much more recently than 160 million years ago, perhaps only 80 million years ago. The question then becomes whether a Baptistina fragment could still have hit the Earth about 15 million years after the collision. Amy Mainzer (JPL), principal investigator of NEOWISE, is co-author of a new paper on the issue:

“This doesn’t give the remnants from the collision very much time to move into a resonance spot, and get flung down to Earth 65 million years ago. This process is thought to normally take many tens of millions of years.”

Mainzer is referring to locations in the main belt where the gravitational forces of the gas giants can nudge asteroids out of their orbits and into a collision course with Earth. And it appears that Baptistina is now in the clear on this charge, with the actual dinosaur killer (if indeed the event was solely precipitated by an asteroid strike, which has not been conclusively proven) remaining unknown. What we do have is plenty of evidence that a 10-kilometer asteroid impacted the Earth 65 million years ago, and we have WISE data that may eventually trace the actual culprit.

The paper suggesting Baptistina’s involvement in the dinosaur extinction event is Bottke et al., “An asteroid breakup 160 Myr ago as the probable source of the K/T impactor,” Nature 449 (September 6, 2007), pp. 48-53 (abstract). And see Larry Klaes’ story Finding the Dino Killer for more background on the original Baptistina theory. The Mainzer paper is Masiero et al., “Main Belt Asteroids with WISE/NEOWISE I: Preliminary Albedos and Diameters,” accepted by the Astrophysical Journal (preprint).