If neutrinos really do travel at a velocity slightly higher than the speed of light, we have a measurement that challenges Einstein, a fact that explains the intense interest in explaining the results at CERN that we discussed on Friday. I think CERN is taking exactly the right approach in dealing with the matter with caution, as in this statement from a Saturday news release:

…many searches have been made for deviations from Einstein’s theory of relativity, so far not finding any such evidence. The strong constraints arising from these observations make an interpretation of the OPERA measurement in terms of modification of Einstein’s theory unlikely, and give further strong reason to seek new independent measurements.

And this is followed up by a statement from CERN research director Sergio Bertolucci:

“When an experiment finds an apparently unbelievable result and can find no artifact of the measurement to account for it, it’s normal procedure to invite broader scrutiny, and this is exactly what the OPERA collaboration is doing, it’s good scientific practice. If this measurement is confirmed, it might change our view of physics, but we need to be sure that there are no other, more mundane, explanations. That will require independent measurements.”

All this is part of the scientific process, as data are sifted, results are published, and subsequent experiments either confirm or question the original results. I’m glad to see that the supernova SN 1987A has turned up here in comments to the original post. The supernova, which exploded in February of 1987 in the Large Magellanic Cloud, was detected by the “Kamiokande II” neutrino detector in the Kamioka mine in Japan. It was also noted by the IMB detector located in the Morton-Thiokol salt mine near Fairport, Ohio and the ‘Baksan’ telescope in the North Caucasus Mountains of Russia. 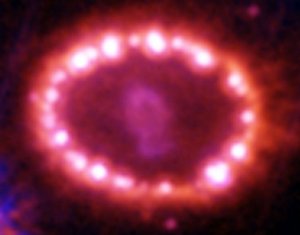 Neutrinos scarcely interact with matter, which means they escape an exploding star more quickly than photons, something the SN 1987A measurements confirmed. But SN 1987A is 170,000 light years away. If neutrinos moved slightly faster than the speed of light, they would have arrived at the Earth years — not hours — before the detected photons from the supernova. The 25 detected neutrinos were a tiny fraction of the total produced by the explosion, but their timing matched what physicists believed about their speed. The OPERA result, in other words, is contradicted by an experiment in the sky, and we have a puzzle on our hands, one made still more intriguing by Friday’s seminar at CERN, where scientists like Nobel laureate Samuel Ting (MIT) congratulated the team on what he called an ‘extremely beautiful experiment,’ one in which systematic error had been carefully checked.

Image: In February 1987, light from the brightest stellar explosion seen in modern times reached Earth — supernova SN1987A. This Hubble Space Telescope image from the sharp Advanced Camera for Surveys taken in November 2003 shows the explosion site over 16 years later. Supernova SN1987A lies in the Large Magellanic Cloud, a neighboring galaxy some 170,000 light-years away. That means that the explosive event – the core collapse and detonation of a star about 20 times as massive as the Sun – actually occurred 170,000 years before February 1987. Credit: P. Challis, R. Kirshner (CfA), and B. Sugerman (STScI), NASA.

It’s true that OPERA was working with a large sample — some 16000 neutrino interaction events — but skepticism remains the order of the day, because as this New Scientist story points out, there is potential uncertainty in the neutrinos’ departure time, there being no neutrino detector at the CERN end. As for the GPS measurements, New Scientist labels them so accurate that they could detect the drift of the Earth’s tectonic plates. Can we still tease out a systematic error from the highly detailed presentation and paper produced by the CERN researchers? They themselves are cautious, as the paper makes clear:

Despite the large significance of the measurement reported here and the stability of the analysis, the potentially great impact of the result motivates the continuation of our studies in order to investigate possible still unknown systematic effects that could explain the observed anomaly. We deliberately do not attempt any theoretical or phenomenological interpretation of the results.

A prudent policy. Let’s see what subsequent experiments can tell us about neutrinos and their speed. The paper is The OPERA Collaboration, “Measurement of the neutrino velocity with the OPERA detector in the CNGS beam,” available as a preprint.

Previous post: On Neutrinos and the Speed of Light