A Machine-Driven Way to the Stars

Are humans ever likely to go to the stars? The answer may well be yes, but probably not if we’re referring to flesh-and-blood humans aboard a starship. That’s the intriguing conclusion of Keith Wiley (University of Washington), who brings his background in very large computing clusters and massively parallel image data processing to bear on the fundamental question of how technologies evolve. Wiley thinks artificial intelligence (he calls it ‘artificial general intelligence,’ or AGI) and mind-uploading (MU) will emerge before other interstellar technologies, thus disrupting the entire notion of sending humans and leading us to send machine surrogates instead.

It’s a notion we’ve kicked around in these pages before, but Wiley’s take on it in Implications of Computerized Intelligence on Interstellar Travel is fascinating because of the way he looks at the historical development of various technologies. To do this, he has to assume there is a correct ‘order of arrival’ for technologies, and goes to work investigating how that order develops. Some inventions are surely prerequisites for others (the wheel precedes the wagon), while others require an organized and complex society to conceive and build the needed tools. 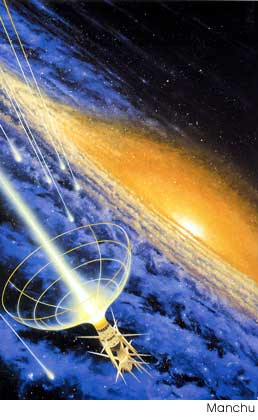 Some technologies, moreover, are simply more complicated, and we would expect them to emerge only later in a given society’s development. Among the technologies needed to get us to the stars, Wiley flags propulsion and navigation as the most intractable. We might, for example, develop means of suspended animation, and conquer the challenges of producing materials that can withstand the rigors and timeframes of interstellar flight. But none of these are useful for an interstellar mission until we have the means of accelerating our payload to the needed speeds. AGI and MU, in his view, have a decided edge in development over these technologies.

Researchers report regularly on steady advancements in robotics and AI and many are even comfortable speculating on AGI and MU. It is true that there is wide disagreement on such matters, but the presence of ongoing research and regular discussion of such technologies demonstrates that their schedules are well under way. On the other hand, no expert in any field is offering the slightest prediction that construction of the first interstellar spaceships will commence in a comparable time frame. DARPA’s own call to action is a 100-year window, and rightfully so.

Wiley is assuming no disruptive breakthroughs in propulsion, of course, and relies on many of the methods we have long discussed on Centauri Dreams, such as solar sails, fusion, and antimatter. All of these are exciting ideas that are challenged by the current level of our engineering. In fact, Wiley believes that the development of artificial general intelligence, mind uploading and suspended animation will occur decades to over a century before the propulsion conundrum is resolved.

Consequently, even if suspended animation arrives before AGI and MU — admittedly, the most likely order of events — it is still mostly irrelevant to the discussion of interstellar travel since by the time we do finally mount the first interstellar mission we will already have AGI and MU, and their benefits will outweigh not just a waking trip, but probably also a suspended animation trip, thus undermining any potential advantage that suspended animation might otherwise offer. For example, the material needs of a computerized crew grow as a slower function of crew size than those of a human crew. Consider that we need not necessarily send a robotic body for every mind on the mission, thus vastly reducing the average mass per individual. The obvious intention would be to manufacture a host of robotic bodies at the destination solar system from raw materials. As wildly speculative as this idea is, it illustrates the considerable theoretical advantages of a computerized over a biological crew, whether suspended or not. The material needs of computerized missions are governed by a radically different set of formulas specifically because they permit us to separate the needs of the mind from the needs of the body.

We could argue about the development times of various technologies, but Wiley is actually talking relatively short-term, saying that none of the concepts currently being investigated for interstellar propulsion will be ready any earlier than the second half of this century, if then, and these would only be the options offering the longest travel times compared to their more futuristic counterparts. AGI and MU, he believes, will arrive much earlier, before we have in hand not only the propulsion and navigation techniques we need but also the resolution of issues like life-support and the sociological capability to govern a multi-generational starship.

The scenario assumes not that starflight is impossible, nor that generation ships cannot be built. It simply assumes that when we are ready to mount a genuine mission to a star, it will be obvious that artificial intelligence is the way to go, and while Wiley doesn’t develop the case for mind-uploading in any detail because of the limitations of space, he does argue that if it becomes possible, sending a machine with a mind upload on the mission is the same as sending ourselves. But put that aside: Even without MU, artificial intelligence would surmount so many problems that we are likely to deploy it long before we are ready to send biological beings to the stars.

Whether mediated by human or machine, Wiley thinks moving beyond the Solar System is crucial:

The importance of adopting a realistic perspective on this issue is self-evident: if we aim our sights where the target is expected to reside, we stand the greatest chance of success, and the eventual expansion of humanity beyond our own solar system is arguably the single most important long-term goal of our species in that the outcome of such efforts will ultimately determine our survival. We either spread and thrive or we go extinct.

If we want to reach the stars, then, Wiley’s take is that our focus should be on the thorny issues of propulsion and navigation rather than life support, psychological challenges or generation ships. These will be the toughest nuts to crack, allowing us ample time for the development of computerized intelligence capable of flying the mission. As for the rest of us, we’ll be vicarious spectators, which the great majority of the species would be anyway, whether the mission is manned by hyper-intelligent machines or actual people. Will artificial intelligence, and especially mind uploading, meet Wiley’s timetable? Or will they prove as intractable as propulsion?