A New Confirmation of General Relativity

Einstein’s Special Theory of Relativity remains much in the news after a weekend of speculation about the curious neutrino results at CERN. Exactly what is going on with the CERN measurements remains to be seen, but the buzz in the press has been intense as the specifics of the experiment are dissected. It will be a while before we have follow-up experiments that could conceivably replicate these results, but it’s interesting to see that another aspect of Einstein’s work, the General Theory of Relativity, has received a new kind of confirmation, this time on a cosmological scale. 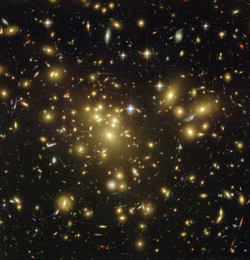 Here we’re talking not about the speed of light but the way light is affected by gravitational fields. The work is out of the Niels Bohr Institute at the University of Copenhagen, where researchers say they have tested the General Theory at a scale 1022 times larger than any laboratory experiment. Radek Wojtak, an astrophysicist at the Institute, has worked with a team of colleagues to analyze measurements of light from galaxies in approximately 8,000 galaxy clusters. Each cluster is a collage of thousands of individual galaxies, all held together by gravity.

Image: Researchers have analysed measurements of the light from galaxies in approximately 8,000 galaxy clusters. Galaxy clusters are accumulations of thousands of galaxies (each light in the image is a galaxy), which are held together by their own gravity. This gravity affects the light that is sent out into space from the galaxies. Credit: Niels Bohr Institute/ Radek Wojtak.

The Copenhagen team was looking specifically at redshift, where the wavelength of distant galaxies shifts toward the red with increasing distance. Redshift has been used to tell us much about how the universe has expanded since the light being studied left its original source. Normally we think of the redshift being the result of the changing distance between the distant light source and ourselves as we both move through space. This is the familiar Doppler shift, and it could be either a redshift or, if the objects are approaching each other, a blueshift.

But another kind of redshift can come into play when space itself is expanding. Here the distance between the distant light source and ourselves is also increasing, but because of its nature, we call this a cosmological redshift rather than a Doppler shift. Gravity can also cause a redshift, as light emitted by a massive object is affected by the gravity of the object. The loss of energy from emitted photons shows up as a redshift commonly called a gravitational redshift.

The General Theory of Relativity can be used to predict how light – and thus redshift – is affected by large masses like galaxy clusters. In the new work, we’re focusing on both cosmological and gravitational redshift, effects apparent when the light from galaxies in the middle of the galactic clusters is compared to those on the outer edges of the cluster. Wojtak puts it this way:

“We could measure small differences in the redshift of the galaxies and see that the light from galaxies in the middle of a cluster had to ‘crawl’ out through the gravitational field, while it was easier for the light from the outlying galaxies to emerge.”

Going on to measure the total mass of each galaxy cluster, the team could then use the General Theory of Relativity to calculate the gravitational redshift for the differently placed individual galaxies. What emerged from the work was that the theoretical calculations of the gravitational redshift based on the General Theory of Relativity were in agreement with the astronomical observations. Says Wotjak:

“Our analysis of observations of galaxy clusters show[s] that the redshift of the light is proportionally offset in relation to the gravitational influence from the galaxy cluster’s gravity. In that way our observations confirm the theory of relativity.”

Does the testing of the General Theory on a cosmological scale tell us anything about dark matter and its even more mysterious counterpart, dark energy? On that score, this Niels Bohr Institute news release implies more than it delivers. The new work confirms current modeling that incorporates both dark matter and dark energy into our model of the universe, but beyond that it can provide no new insights into what dark matter actually is or how dark energy, thought to comprise 72 percent of the structure of the universe, actually works. We can make inferences from our understanding of the behavior of the light, but we have a long way to go in piecing together just what these dark components are.

Next post: Lost in Time and Lost in Space