Earth’s Oceans: A Cometary Source After All?

Getting water into the inner Solar System is an interesting exercise. There has to be a mechanism for it, because the early Earth formed at temperatures that would have caused any available water to have evaporated. Scientists have long speculated that water must have been delivered either through comets or asteroids once the Earth had cooled enough to allow liquid water to exist. The former was preferred because the water content in comets is so much higher than in asteroids.

But the theory had problems, not the least of which was that comets studied in this regard showed deuterium levels twice that of Earth’s oceans. The ratio of deuterium and hydrogen, both made just after the Big Bang, can vary in water depending on its location because local conditions can affect the chemical reactions that go into making ice in space. A comparison of the deuterium to hydrogen ratio in extraterrestrial objects can be compared to water found in Earth’s oceans to identify the source of our water. Now comet Hartley 2 swings into the picture, for researchers have announced that its hydrogen/deuterium ratio is similar to Earth’s oceans. 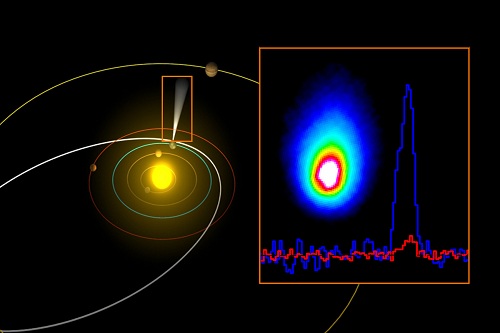 Image: This illustration shows the orbit of comet Hartley 2 in relation to those of the five innermost planets of the Solar System. The comet made its latest close pass of Earth on 20 October last year, coming to 19.45 million km. On this occasion, Herschel observed the comet. The inset on the right side shows the image obtained with Herschel’s PACS instrument. The two lines are the water data from HIFI instrument. Credit: ESA/AOES Medialab; Herschel/HssO Consortium.

So how do you measure the hydrogen/deuterium ratio in the water of a comet? The answer is an instrument called HIFI, which operates aboard the European Space Agency’s Herschel infrared space observatory. HIFI (Heterodyne Instrument for the Far Infrared) is a high-resolution heterodyne spectrometer developed in The Netherlands that covers two bands from 480-1250 gigaHertz and 1410–1910 gigaHertz. Herschel was examining the comet’s coma, which develops as frozen materials inside vaporize when the comet moves closer to the Sun.

Remember, previous comet studies had found hydrogen/deuterium ratios different from our oceans. The difference between these comets and Hartley 2 may be that Hartley 2 was formed in the Kuiper Belt, whereas other comets studied in this regard are thought to have first formed near Jupiter and Saturn before being flung out by the gravitational effects of the gas giants, returning millions of years later for their pass around the Sun. The hydrogen/deuterium ratio we see in water ice may well have been different in the Kuiper Belt than in ice that first formed in the inner system, where conditions are much warmer. Further comets studies may confirm the idea.

“Our results with Herschel suggest that comets could have played a major role in bringing vast amounts of water to an early Earth.This finding substantially expands the reservoir of Earth ocean-like water in the solar system to now include icy bodies originating in the Kuiper Belt.”

Surely the early oceans were the result of both comet and asteroid impacts, but the new findings point back to comets as major players. Even so, we have plenty of work to do to understand the role of the lightest elements and their isotopes in the early Solar System. Six comets besides Hartley 2 have been examined for hydrogen/deuterium levels, all with deuterium levels approximately twice that found in Earth water. Kuiper Belt comets were once thought to have even higher deuterium levels than Oort Cloud comets, an idea the Hartley 2 results have now refuted.

The team led by Paul Hartogh (Max Planck Institute for Solar System Research) has also used the Herschel Observatory to measure the hydrogen/deuterium ratio in comet 45P/Honda-Mrkos-Pajdusakova, another Kuiper Belt comet whose data is now under analysis, so we may soon have new data to add to this story. The paper is Hartogh, “Ocean-like water in the Jupiter-family comet 103P/Hartley 2,” published online in Nature 5 October 2011 (abstract).

And there is further news out of the joint meeting in Nantes, France, of the European Planetary Science Congress and the American Astronomical Society’s Division for Planetary Sciences, where this work was announced. As noted in this article in Nature, a new study of the Sun-like star Eta Corvi, which is roughly the same age our Sun was during the Late Heavy Bombardment (when most water is thought to have been delivered to the Earth), shows that the star has an inner ring of warm dust that is rich in carbon and water. Team leader Carey Lisse (JHU/APL) thinks we’re seeing the traces of one or more Kuiper Belt-class comets being flung into the inner system, colliding with a planet there to form the ensuing ring of material.

Next post: A New Slant on ‘The Planet of Doubt’