About a month ago we were looking at the work of Ray Jayawardhana and team on the brown dwarf 2MASS 2139, an interesting case because Jayawardhana (University of Toronto) thinks he has spotted a giant storm raging on the object, or perhaps holes in the cloud deck that allow a glimpse of deeper layers of the atmosphere within. At issue is the striking 30 percent change in brightness of the star within a mere eight hours, seeming to indicate atmospheric changes we can pick up as the brown dwarf rotates. Unlike a normal star, a brown dwarf is hot when young but gradually cools to the point where it has an atmosphere similar to that of a gas giant.

All this is part of a survey program called SONYC – Substellar Objects in Nearby Young Clusters – that uses data from the Subaru Telescope in Hawaii and the Very Large Telescope (VLT) in Chile. SONYC may change the way we look at brown dwarfs, and now it is back in the news. The latest word is that the same team has found over two dozen free-floating brown dwarfs within two young star clusters, including one object just six times more massive than Jupiter. Have a look at the image below, which depicts brown dwarfs in the cluster NGC 1333. 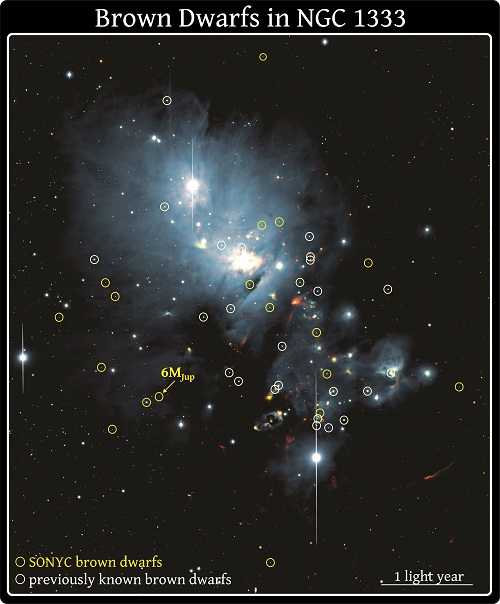 What to make of the smallest of the brown dwarfs yet identified in this cluster? Aleks Scholz of the Dublin Institute of Advanced Studies comments:

“Its mass is comparable to those of giant planets, yet it doesn’t circle a star. How it formed is a mystery.”

Indeed, but the implication is that free-floating objects not a great deal larger than a Jupiter-class planet can form the same way stars form, emerging from contracting gas clouds, although there is also the possibility that some of the smaller brown dwarfs formed around a star and were later ejected from the system. SONYC is all about building a more complete census of brown dwarfs in star-forming regions to resolve questions like this, the ultimate goal being to understand how the early development of stars depends on object mass, which will in turn illuminate models of dynamical interactions and accretion as the nascent objects form. These considerations make brown dwarfs in a mass range that overlaps with massive planets a key area for research.

The SONYC census is developing our database in this area, as described in one of the two papers recently made available on this work:

We find 10 new likely brown dwarfs in this cluster, including one with a spectral type ~L3 and two more with spectral type around or later than M9. These objects have estimated masses of 0.006 to 0.02M [solar masses], the least massive objects identified thus far in this region. This demonstrates that the mass function in this cluster extends down to the Deuterium burning limit and beyond. By combining the findings from our SONYC survey with results published by other groups, we compile a sample of 51 objects with spectral types of M5 or later in this cluster, more than half of them found by SONYC. About 30-40 of them are likely to be substellar.

The astronomers studied both NGC 1333 and the Rho Ophiuchi star cluster with Subaru at both optical and infrared wavelengths. NGC 1333, a young cluster thought to be no more than a million years old, turns out to have a higher population of brown dwarfs than the average young cluster, a fact that may offer clues to different conditions within the cluster that affect brown dwarf formation. The cluster houses half as many brown dwarfs as normal stars.

The star vs. brown dwarf ratio in NGC1333 is significantly lower than in other nearby star forming regions, possibly indicating environmental differences in the formation of brown dwarfs. We show that the spatial distribution of brown dwarfs in NGC1333 closely follows the distribution of the stars in the cluster. The disk fraction in the brown dwarf sample is < 66%, lower than for the stellar members, but comparable to the brown dwarf disk fraction in 2-3 Myr old regions. The substellar members in NGC1333 show a large fraction of highly flared disks, evidence for the early evolutionary state of the cluster.