The Fate of Planets Near Galactic Center

﻿It was Gregory Benford who used the wonderful phrase ‘the first hard science fiction convention’ to describe what happened at the 100 Year Starship Symposium. It was an apt choice of words. ‘Hard’ science fiction refers to SF that goes out of its way to get the science right, and in which the scientific and technical details play a major role in the development of the plot. Science fiction critic P. Schuyler Miller evidently coined the term in one of his reviews for Astounding Science Fiction back in the 1950s. In many ways, the Symposium operated under a science fictional meme. 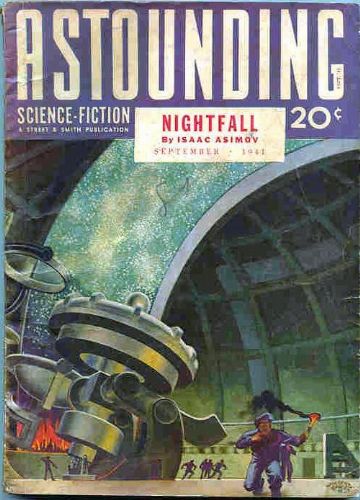 Science fiction at its best exists to paint possibilities for us. Some scientific speculations may be remarkable in their own right but only become vivid when portrayed by writers who can make the background science into a scenario that plays out in fictional terms. An obvious case is the classic Isaac Asimov tale “Nightfall,” published in Astounding’s September, 1941 issue. Asimov took us to a place that knew night only once every 2000 years because of the configuration of the six suns in its planetary system. His craft painted a world few would have imagined, and showed us the consequences of its existence upon a civilization there.

All these musings were triggered by the latest news from the University of Leicester, and I’d love to see the science fiction story that might emerge when ‘hard’ SF tackles its findings. Surely someone will tell the story of a civilization too close to galactic center (speaking of places that are well lit!), and the consequences as radiation levels begin to rise to untenable levels on a world too near the central black hole. If interstellar flight is possible, surely it would happen here as a means of species survival.

For black holes seem to be common at galactic center in many galaxies, and in particular the supermassive ones that lurk at the center of galaxies like our Milky Way. Huge cloaks of dust obscure many of these, and a team of scientists led by Sergei Nayakshin at Leicester thinks that collisions between planets and asteroids occurring at speeds up to 1000 kilometers per second could be the cause. Nayakshin’s team argues that the accretion disc around supermassive black holes will eventually form planets, and that planets and asteroids that formed in the outer regions of the disc would be stripped away by the close passage of stars in the disc, given the tight quarters at galactic center.

Released from their host stars, these solids and planets orbit the SMBH independently. Since the velocity kick required to unbind them from the host is in km/s range, whereas the star’s orbital velocity around the SMBH is ∼ 1000 km/s, orbits of the solids are initially only slightly different from that of their hosts. AGN gas discs are expected to be very geometrically thin (e.g., Nayakshin & Cuadra 2005), and if they always lay in the same plane (e.g., the disc galaxy’s mid-plane) then the resulting distribution of solids would be quite thin and planar as well.

So far so good, but planets in this scenario seem bound to come to grief:

However, there is no particularly compelling reason for a single-plane mode of accretion in AGN as the inner parsec is such a tiny region compared with the rest of the bulge (Nayakshin & King 2007), and chaotically-oriented accretion may be much more likely…

Collisions are bad enough, but the planets would have already been sterilized as they orbited the supermassive black holes, says Nayakshin in a related news release:

“Too bad for life on these planets, but on the other hand the dust created in this way blocks much of the harmful radiation from reaching the rest of the host galaxy. This in turn may make it easier for life to prosper elsewhere in the rest of the central region of the galaxy.”

The team takes its lead from the zodiacal dust in our own Solar System, known to be the result of collisions between solid objects like asteroids and comets. And its work may help us understand how black holes grow and affect the galaxies within which they reside. The dust and gas in the inner regions of our own galaxy, much of which might have been expelled or destroyed by this process, would otherwise have contributed to the formation of more stars and planets. The black hole at galactic center would have thus played a significant role in the evolution of the Milky Way. 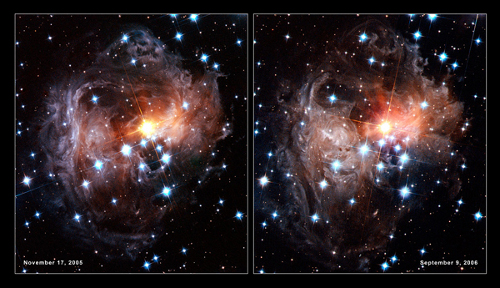 Image: ‘Light echo’ of dust illuminated by a nearby star V838 Monocerotis as it became 600,000 times more luminous than our Sun in January 2002. The flash is believed to have been caused by a giant collision of some kind, e.g., between two stars or a star and a planet. Collisions of smaller objects, such as asteroids or minor planets near a supermassive black hole could also be dramatic due to the huge collision velocities and would release a lot of dust. Credit: NASA/ESA.

The paper is Nayakshin, et al., “Are SMBHs shrouded by ‘Super-Oort’ clouds of comets and asteroids?” in press at Monthly Notices of the Royal Astronomical Society (preprint). The science fiction story based on it remains to be written.