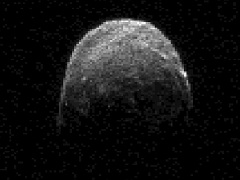 2005 YU55, an asteroid roughly the size of a city block, makes its closest pass today, approaching within 325,000 kilometers, closer than the distance between the Earth and the Moon. It will be another seventeen years before we get an asteroid as substantial as this in such proximity. That one is 2001 WN5, which will pass halfway between the Moon and the Earth in 2028. Today’s object of interest, 2005 YU55, isn’t in danger of hitting the Earth on this pass, but astronomers track these objects closely because over time their trajectories are known to change.

The asteroid’s discoverer, Robert McMillan (University of Arizona) calls it “…one of the potentially hazardous asteroids that make close approaches from time to time because their orbits either approach or intersect the orbit of the Earth,” all of which reminds us of the need to keep an eye on it and other Earth-crossing objects. McMillan is co-founder and principal investigator for SPACEWATCH, whose job it is to find and track objects that might pose a threat to the Earth. Both it and the Catalina Sky Survey are based at the University of Arizona’s Lunar and Planetary Laboratory, where the CSS has NASA support to discover potentially dangerous asteroids.

SPACEWATCH uses charge-coupled devices (CCDs) and specialized software to study the images it generates, passing suspect objects on to the Minor Planet Center at the Smithsonian Astrophysical Laboratory. It was on one of these searches that 2005 YU55 turned up six years ago, an apparent Near Earth Object. Subsequent investigation refined its trajectory:

“The MPC posted it on their confirmation page, which is monitored by everybody who follows up newly discovered Near Earth Objects,” McMillan said. “So we followed it up on subsequent nights and over the following month. Over time, we refined its orbit to the point that NASA’s Jet Propulsion Laboratory listed a large number of potential close encounters with the Earth. Now, after 767 observations by ground-based observers, we have the orbit of that asteroid really nailed down, so we know it’s not going to hit the Earth on Nov. 8.”

What we know about this object is that it is roughly spherical and measures about 400 meters in diameter, with a complete rotation every 18 hours. The asteroid is a carbonaceous chondrite, but in the absence of more detailed information about its physical properties, its long-range trajectory is hard to predict, especially given variables like the Yarkovsky Effect, which results from uneven heat distribution on the surface as the object radiates sunlight back into space. All the more reason, then to look forward to the OSIRIS-REx mission, a sample return of the carbonaceous chondrite 1999 RQ36 that will bring material from the asteroid back to Earth in 2023.

The Near-Earth Object Observations Program at JPL known as Spaceguard is also part of the detection program for nearby asteroids, discovering and tracking them to analyze their trajectories for possible danger to Earth. What we know of 2005 YU55 is that its orbit regularly brings it close not only to the Earth but also to Venus and Mars, but the 2011 encounter with our planet is the closest it has come to us for the last 200 years. We should have new Arecibo radar images of the asteroid after closest approach at 1828 EST (1128 UTC). More in this NASA news release, and see this University of Arizona page for further background on the 2005 YU55 encounter. Finally, amateur astronomers equipped to do accurate photometry are being sought to help observe the object. If you’re interested, this Sky & Telescope article has the details.