A Look at Methane-Based Life

Could life exist on a world with a methane rather than a water cycle? The nitrogen-rich atmosphere of Titan, laden with hydrocarbon smog, is a constant reminder of the question. Cassini has shown us the results of ultraviolet radiation from the Sun interacting with atmospheric methane, and we’ve had radar glimpses of lakes as well as the haunting imagery from the descending Huygens probe. Our notion of a habitable zone depends upon water, but adding methane into the mix would extend the region where life could exist much further out from a star. Chris McKay and Ashley Gilliam (NASA Ames) have been actively speculating on the possibilities around red dwarfs and have published a recent paper on the subject. 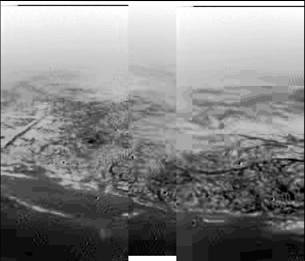 It’s intriguing, of course, that with methane we get the ‘triple point’ that allows a material to exist in liquid, solid or gaseous form at a particular temperature and pressure. That makes Titan ‘Earthlike’ in the sense that our initial view showed a landscape with the clear signs of running liquid, but this is a world where temperatures dip to 94 K (-179 Celsius) and water is the local analog of rock. In a fine essay on McKay’s work in Astrobiology Magazine, Keith Cooper notes an earlier McKay paper that suggested a potential life mechanism in this kind of environment: Local methanogens would consume hydrogen, acetylene and ethane while exhaling methane. That’s a mechanism useful for astrobiologists because it would show a particular signature in the depletion of hydrogen, acetylene and ethane at the surface.

Image: This composite was produced from images returned on 14 January 2005, by ESA’s Huygens probe during its successful descent to land on Titan. It shows the boundary between the lighter-coloured uplifted terrain, marked with what appear to be drainage channels, and darker lower areas. These images were taken from an altitude of about 8 kilometres with a resolution of about 20 metres per pixel. Credits: ESA/NASA/JPL/University of Arizona.

But the fact that Titan does show signs of such depletion isn’t necessarily indicative of life, for these signs are themselves dependent on atmospheric models that are still in play, and in any case we know little about other processes that could mimic the same characteristics without implications for life. Exo-Titans may be relatively common, for all we know, but to find them we are going to have to first establish that life can exist in this environment and then work out an atmospheric signature we can search for. Cooper quotes Lisa Kaltenegger (Max Planck Institute) on the issue:

“We just don’t know what the tell-tale signs for life would be in such an atmosphere because it is so vastly different from ours. That said, it will change in a flash if Chris [McKay] finds life on Titan and can tell us what it produces and what we could look for remotely with a telescope.”

That makes future probes of Titan all the more interesting, and adds to the desirability of a long-term presence on the moon, either through a surface rover or an aerostat that could range high over the surface and give us a highly-focused look. As for those red dwarfs McKay studied in his recent paper, a methane habitable zone should exist between 0.63 and 1.66 astronomical units (99 million and 248 million kilometers) around the star Gliese 581, that frequently invoked site of habitable planet speculation. Unfortunately, while we do have four planets confirmed in the system (with two others considered controversial), none exists in the methane sweet spot.

While Gliese 581 is an M2.5V dwarf, the authors also calculate the numbers for an M4 dwarf, finding a closer habitable zone between 0.084 AU and 0.23 AU (12.6 million kilometers to 34.4 million kilometers) in methane terms. The beauty of studying habitable environments — water or methane — around M-dwarfs is that these are systems where the orbital distances involved will be small and detection of planets through radial velocity and planetary transits somewhat easier. But what happens on the surface of such a planet is another matter. Much depends on how the atmosphere is affected by stellar conditions, as Cooper notes:

Titan’s atmosphere is opaque to blue and ultraviolet light, but transparent to red and infrared light, and red dwarfs produce more of the latter than the former. If Titan orbited a red dwarf, more red light would seep through to its surface, warming the planet and extending the range of the liquid methane habitable zone. (Interestingly, a red giant, which is close to the endpoint in the life cycle of a Sun-like star, produces light of similar red wavelengths. When our Sun expands into a bloated red giant in about five billion years, engulfing all the planets up to Earth and possibly Mars, Titan may well reap the benefits – for a short while at least before the red giant puffs away to leave behind a white dwarf star.)

Countering this warming is the effect of large stellar flares on evolving life, frequent on younger red dwarfs. McKay’s work suggests that such active M-dwarfs would dissociate atmospheric molecules on a Titan-like world, making the place more and more smoggy and reducing the surface temperature. The net effect would be to move the methane habitable zone closer to the star. Clearly we have a long way to go to be able to actively search for methane-based life outside our own Solar System, and probably decades to go before we get back to Titan.

For the time being, then, a methane habitable zone is sheer speculation, but it’s interesting to ponder the life that might appear on such worlds. One thing seems sure: The temperatures at which liquid methane exists would produce creatures with slow metabolisms. Will a future Titan probe find life? Given our relatively greater understanding of life’s relation to liquid water, we’re obviously going to keep the focus there, but a ‘second genesis’ on Titan would change the equation considerably as we ponder how frequently life can form and with what constituents.

The paper is McKay and Gilliam, “Titan under a red dwarf star and as a rogue planet: requirements for liquid methane,” Planetary and Space Science Volume 59, Issue 9, pp. 835-839 (July 2011). Abstract available.

Next post: A Gas Giant Ejected from our System?