Can Project Orion Be Re-Born?

Project Orion keeps surfacing in propulsion literature and making the occasional appearance on the broader Internet. A case in point is a vigorous defense of Orion-style engineering by Gary Michael Church on the Lifeboat Foundation blog. Church is rightly taken with the idea of propelling payloads massing thousands of tons around the Solar System, but he’s also more than mindful of the realities, both political and economic, that have kept Orion-class missions in the realm of the theoretical. It was, after all, the nuclear test ban treaties of the Cold War era that brought the original project to a close, and anti-nuclear sentiment remains strong in the public today. 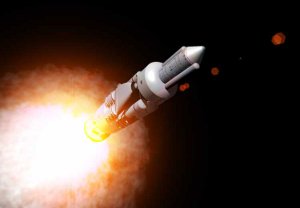 But the Orion idea won’t go away because it is so tantalizing. Church runs through the relevant information, much of it familiar to old Centauri Dreams hands. Freeman Dyson and Ted Taylor were working on a concept in which a large percentage of the energy of a nuclear explosion — these are small nukes of the kind Taylor specialized in — could be concentrated in one direction. If you can do that, you can blow that energy into a propellant slab to create thrust, assuming that a massive pusher plate would be present to absorb the blast without melting in the process.

Remarkably, the research indicated that this was possible because the blast would last for such a tiny amount of time as the craft, boosted by each subsequent bomb, accelerated through space. It’s hard to describe what riding aboard such a craft would be like, though Church likens it to repeated aircraft carrier catapault launches. My own guess is that even the most highly advanced pusher plate/shock absorber combination would have trouble making this ride anything but a nightmarish if potentially survivable experience. But Dyson and Taylor had numbers showing that it was worth pursuing, and there were grand thoughts about shaking out an Orion-class mission back in the late ‘60s by going all the way to Saturn’s moon Enceladus.

A defense of Orion will need to produce reasons for its resurrection, and Church offers several, beginning with the radiation that bathes deep space. Some kinds of cosmic rays pose a serious threat. From the essay:

The presence of a small percentage of highly damaging and deeply penetrating particles — the heavy nuclei component of galactic cosmic rays makes a super powerful propulsion system mandatory. The tremendous power of atomic bomb propulsion is certainly able to propel the heavily shielded capsules required to protect space travelers. The great mass of shielding makes chemical engines, inefficient nuclear thermal rockets, the low thrust forms of electrical propulsion, and solar sails essentially worthless for human deep space flight. Which is why atomic bomb propulsion is left as the only “off the shelf” viable means of propulsion. For the foreseeable future, high thrust and high ISP to propel heavy shielding to the required velocities is only possible using bombs.

It’s true that the bulk of the radiation we’ve so far had experience with in long-duration spacecraft has been more manageable, largely because a venue like the International Space Station is shielded by the Earth’s magnetic field. But as we start talking about multi-year missions, our thinking has to turn toward practical methods of shielding far beyond Earth’s orbit. Church sees the need for shields massing hundreds of tons that could hardly be propelled by conventional methods, whereas an Orion-style craft, bulking itself up with lunar ice deposits from the Moon’s north pole, could boost out of lunar orbit with a full and robust radiation shield. In his view, then, only Orion can take us on manned missions to other planets, much less the kind of interstellar missions sometimes contemplated for this technology.

But shielding a spacecraft, at least within the Solar System, may not be as demanding as this, as at least one space scientist believes. Robert Zubrin has been working out the basics of Mars Direct for some time now, and the radiation issue is a major concern for him as well. Where Church says “An appreciation of the heavy nuclei component of galactic cosmic radiation, as well as solar events, will put multi-year human missions beyond earth orbit on hold indefinitely until a practical shield is available,” Zubrin (in the latest edition of The Case for Mars) refers to this kind of talk as ‘scaremongering’:

Cosmic rays deliver about half the radiation dose experienced throughout life by people on the surface of the Earth, with those living or working at high altitude receiving doses that are quite significant. For example, a trans-Atlantic airline pilot making one trip per day five days a week would receive about a rem per year in cosmic-ray doses. Over a twenty-five-year flying career, he or she would get more than half the total cosmic-ray dose experienced by a crew member of a two-and-one-half-year Mars mission.

As the issue continues to be debated, we also have to look toward future interstellar missions, no matter what kind of propulsion system we commit to the task. If we’re talking human missions, it will clearly be essential to learn more about the shielding effects of the heliosphere on galactic cosmic rays to find out what kind of shielding will be needed for a crew that moves into interstellar space. Dana Andrews (Andrews Space), who has collaborated in the past with Zubrin on magsails, is just one researcher who has examined the issue. See his “Things to Do While Coasting Through Interstellar Space,” AIAA-2004-3706, 40th AIAA/ASME/SAE/ASEE Joint Propulsion Conference and Exhibit, Fort Lauderdale, Florida, July 11-14, 2004. You may find my article on Andrews’ work Dust Up Between the Stars helpful as well.

The Imperative of Species Survival

The real motivator for Orion technology may not be crew protection — much of our future work in the outer system and beyond may well be robotic — but the need to protect the planet from asteroids or comets on dangerous trajectories. This is Church’s ultimate justification, the one he hopes will trump the anti-nuclear lobby and bring clarity to the issue, and he points out that an Orion-class mission would be just the ticket if we had to send a human crew to an errant object deep in the Solar System to begin adjustments to its course. Thus this:

It is within our power to defend Earth from the very real threat of an impact, and at this time self-defense is the only valid reason to go into space instead of spending the resources on Earth improving the human condition. Protecting our species from extinction is the penultimate moral high ground above all other calls on public funds.

And this final thrust:

A powerful force of nuclear powered, propelled, and armed spaceships cannot guarantee Earth will not suffer a catastrophe. The best insurance for our species is to establish, in concert with a spaceship fleet, several independent self-supporting off world colonies in the outer solar system. The first such colony would mark the beginning of a new age. 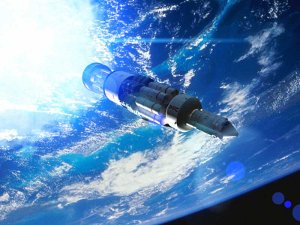 Church’s essay is well thought out and deserves more attention than it seems to have been getting, considering that Orion gets us around problems like the harnessing of massive energies within an internal engine without melting the engine, something that uncontained nuclear-generated plasma and pusher plates could resolve. Of course, George Dyson explains all this in his wonderful account of his father’s and Taylor’s work Project Orion: The True Story of the Atomic Spaceship (2002), but I’m always thinking in terms of keeping deep space concepts in front of the public, and Church lays out the basics in ways that might attract a Net-reading generation familiar mostly with chemical rockets.

The question then becomes, if we were to explore this technology again, would the drivers Church mentions be enough to get us past the anti-nuclear lobby to begin testing the concept meaningfully? Because right now we have only the sketchiest knowledge of how adaptable Orion might prove to be, and only the reassurances of its proponents that a human crew would survive the ride. Developing an Orion prototype would demand testing it off the planet, and that presupposes lofting a great deal of nuclear material into space. We all remember the fuss kicked up by the plutonium carried aboard the Cassini probe to Saturn. Can the planetary insurance imperative become a credible enough issue to turn the prevailing view of nukes around?